“My only durable identity is my humanity” 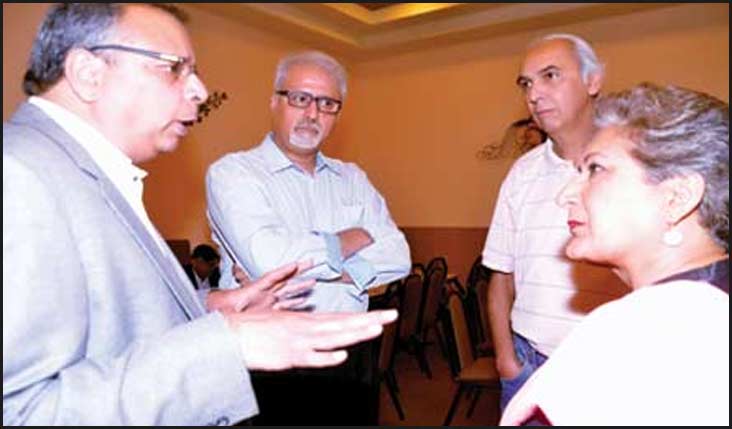 Akhilesh Mishra: humanist and poetry - Writer and activist Raheel Raza (right) in discussion with some Pakistanis at the event. Photos: Farhat Sadaqa

Akhilesh Mishra, the Indian Consul General in Toronto, wins hearts with his poetry and philosophy

Speaking at an informal discussion organised by the South Asian Peoples Forum in the Toronto area in Canada on Monday, Akhilesh Mishra, the unassuming Consul General of India won many hearts with his soul-touching poetry, couplets of which were interspersed throughout his brief speech.

This, coupled with his humane and compassionate outlook, comes as a refreshing change from the kind of talk and posturing one usually gets from diplomats.

Nothing is permanent, said Mishra, speaking in Hindustani. “Today I’m the Consul General in Toronto, I am with the Foreign Service, all this may change at some point. But what is certain is that I will be a human as long as I am alive. That is my only durable identity – my humanity.”

Reciting a couplet from one of his own poems, he said we need to stop seeking imperfections and fault-finding.

Each of us needs to do what we can, where we can, and how we can, to help others, he said. For his part, he does his best to expedite visas for Pakistanis wanting to visit loved ones in India. In the process, he said, more Pakistanis in the Toronto area have received visas to visit India than ever before.

Mishra spoke warmly of his days in Nepal, where he developed a friendship with Kanak Mani Dixit, Editor of Himal Southasian – “true South Asian”, as Mishra termed him.

He also spoke warmly of the Pakistani Consul General Asghar Ali Golo who he said had been most helpful to him when Mishra had arrived in Toronto, as had Golo’s predecessor.

The Pakistani CG had a prior commitment and could not attend the discussion. He had promised to send a deputy but that chair remained empty.

Toronto, Mishra’s seventh foreign posting, is different from the other places he has been stationed at he said. For one thing there is the sheer number of ‘desis’ living there – three per cent of Canada’s population, as Tahir Aslam Gora noted while introducing the CG.

Mishra found the level of fraternity among the South Asian community in the area unusually high. One measure is that he attends more Pakistani and other non-Indian events now than at any of his other postings. For this one must appreciate the role of the community leaders, including people like Gora, the event’s main organiser Barrister Hamid Bhashani Khan, and the prominent interfaith and women’s rights advocate Raheel Raza who was also present.

Bashani Khan made a poignant plea to see Kashmiris as human beings and to stop seeing Kashmir as a ‘red flag’. ‘Aman’ (peace) he said, should not be an ‘asha’ (hope) only but should translate into concrete reality. This is not an emotional but a political issue that must be resolved for the sake of the people of the region

Briefs Hope for a better tomorrow