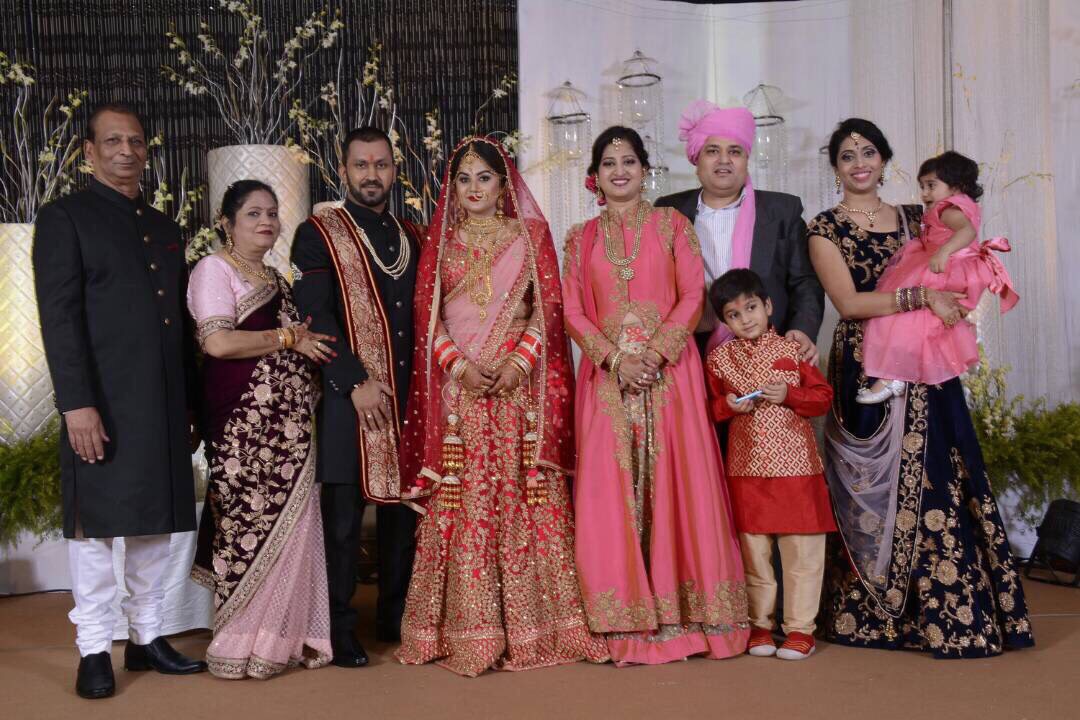 The Agarwal family in Ahmedabad with the bride from Pakistan.

Another story of love and hope has emerged from the countries of India and Pakistan.

This is about a Pakistani girl and Indian boy.

Sapna Bethlani of Pakistan went on a holiday to India with her family.

The families Bethlani of Umerkot, Sindh, Pakistan and Agarwal from Ahmedabad, Gujarat, India, were introduced to each other at a Holi festival (festival of colours) even on 13 March 2017 through mutual friends.

Agarwal’s son Rahul and Bethlani’s daughter Sapna met
You know there are some things that you just know, it was that!

Groom Rahul with his bride Sapna

This is a story about my family. We live in Umerkot which is part of Thar Desert, Sindh. The train that goes from Zero Point, Pakistan, to Monabao, India, passes through Umerkot. This historical district which houses the Fort of Umar Marvi is also the birthplace of Mughal Emperor Akbar. It also has a site called “Moomal hi Mark” that commemorates another famous folk tale from here, Momal and Rano.

My father Dharamdas Bethlani is a commission agent who grew up in Umerkot. He runs a fruit and vegetable market here inherited from my grandfather. He is ex-Nazim of Umerkot, and has also been District Councilor.

My mother Dr. Ruby Dharamdas Bethlani is from Badin, Sindh. She is a gynecologist and has a private practice. She is involved in social work, and has been Umerkot Coordinator for Aurat Foundation. Currently she is Umerkot Director at Thar Deep Rural Development, TRDP. She has also been twice elected member District Council.

We are three sisters and two brothers. I am the youngest. Since childhood I have seen my parents struggling for us and they are still struggling. Bringing up children and educating them in today’s environment hasn’t been easy but my parents have always worked hard to achieve something and provide for us.

Last year, we went to for a holiday to Ahmedabad, Gujarat, where my father has some friends and relatives who migrated. On the day of the Holi festival (festival of colors), 13 March 2017, we were invited to celebrate at a family gathering.

Also present there was the Agarwal family. We didn’t know then that they would become my sister’s in-laws! They asked my father’s friend about my sister Sapna and indicated they were interested in a ‘rishta’ (marriage). Then my sister Sapna and Rahul Agarwal, now my brother-in-law, met and talked with each other. An inner voice said yes, and they decided on forever! They do say that couples are made in heaven.

Who knew that going on a holiday would end with Sapna getting married there? It had to be destiny. The marriage was arranged then and there between people of two different cultures. The ceremony and reception took place in Ahmadabad Gujarat on 31 May 2017. My family stayed on in India till the wedding.

Sapna is happy in India with her husband and new family. We miss her, and hope that both countries, India and Pakistan, grant us visas to enable us to keep meeting.

Dr Komal Bethlani from Umerkot, Sindh, Pakistan, works at Community World Service Asia as a medical officer. She shared her family’s story and sister’s wedding photos with us in an effort to contribute towards peace “with this little example to say that India and Pakistan, we don’t hate each other”. Email: [email protected]