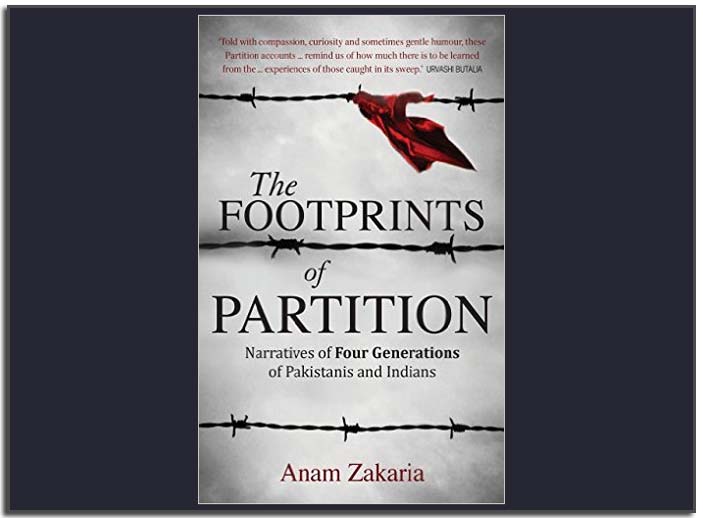 The partition generation represented in Anam Zakaria’s book appears to be asking a singular question: how does one choose one home over the other?

What role do oral histories play in the collective consciousness of a country? Are individual memories altered and subsumed by meta narratives? Can time reduce the bitterness of an event as divisive as the partition of the subcontinent? Anam Zakaria’s The Footprints of Partition raises these and some more pertinent questions through a collection of oral histories, representing a cross-section of four generations of Pakistanis and Indians.

Time is of the utmost importance in this first-time author’s book. The passage of time is the underlying force that drives the 17 narratives and binds them together. With the passing away of an ever-increasing number of the partition survivors, it is time that made Zakaria conscious of the urgency of recording and publishing these oral histories.

As a part of the team at the Citizens Archive of Pakistan (CAP), a non-profit organisation working for cultural and historical preservation in Pakistan, Zakaria had the opportunity to interact with countless people from the partition generation.

It was one such interview of an elderly man named Muhammad Rauf and his aching desire to revisit his pre-partition home in Amritsar that made Zakaria question her own perception of history. The septuagenarian’s longing for a glimpse of the home that had been snatched by the partition was echoed by many of the other interviewees. For a third generation Pakistani, this emotion presented a quandary. How could someone who had witnessed the madness of partition still consider enemy territory home, while she and others, who had not even lived through the experience, feel such animosity towards India?

Interviewing hundreds of people across different age groups, she realised that “the definition of a Pakistani identity which has become crystallised over the decades for the younger generations was much more fluid for the Partition generation.” The partition generation represented in her work appears to be asking a singular question: how does one choose one home over the other? The answers are varied. Some were forced to choose, and others made the choice voluntarily.zainab

However, it is the disconnect between the different generations’ sense of affiliation and reaction towards the ‘other’ that forms the focus of the book.

Footprints of Partition contends that this difference cannot simply be explained by the generation gap. Enclosed by horrifying tales of bloodshed and hatred, the partition narrative in both India and Pakistan has effectively alienated the people from those across the border. The state machinery in Pakistan, like its counterpart in India, has played its part in actively painting the other as arch-enemy.

Coloured by the nationalist fervour of a security state, the history textbooks in Pakistan leave no space for fostering cordial relations with our predominantly Hindu neighbour. Schoolgoing children learn about the atrocities committed against the Muslims by the non-Muslims. But nowhere can the stories of humanity prevailing be found. Mainstream media in both countries continues to endorse the state-approved projection of the enemy because sadly, sensationalism sells.

According to Zakaria, oral histories are the missing link that can help both Indians and Pakistanis make better sense of the shared experience of partition.

In a talk on the book arranged at Lahore’s Forman Christian College’s Center for Public Policy and Governance, Zakaria conceded that while there are certain limitations to using oral narratives as a record of history, it is this very individuality characteristic of oral histories that can act as a counterfoil to the one dimensional state-approved history of partition.

Despite the seriousness of the subject under discussion, Footprints of Partition is an easy read. By viewing such a sensitive issue through oral histories, the book humanises the meta narrative of partition and makes it accessible to those whose lives may or may not have been affected by the events of 1947.

The narration is interspersed with the author’s thoughts triggered by the interviewees’ stories. She does not gloss over the carnage and virulent hatred at the time of partition to present a more palatable version of history. Her intention, she says, was to present the varied spectrum of experiences that the partition entailed. The book does not romanticise the past and remains non-judgmental of the younger generations’ unexplained hatred towards those across the border.

Why is it then so important to maintain access to the disappearing narratives of the partition generation? The answer lies in the connection that is increasingly made between Pakistanis and extremists. Indian attitudes might be explained as an ingrained negative bias but it is less easy to dismiss evidence of intolerance towards pluralism within the country.

The decades-long drive to achieve conformity of opinion has coiled back on the Pakistani state. The intolerance towards Hindus and Sikhs bred through jingoistic propaganda today threatens the peaceful co-existence of different religious denominations within the country. Learning to review our collective history by acknowledging the existence of multiple narratives can become the first step towards a society more receptive towards plurality. Footprints of Partition does a good job of reminding the reader that unquestioning acceptance of the filtered version of history does not simply warp our sense of the past but also shapes our future.

— The News on Sunday

Being Indian doesn't mean that we should hate Pakistan - Kailash Satyarthi The city of the Taj welcomes Pakistani guests, fetes peace activists