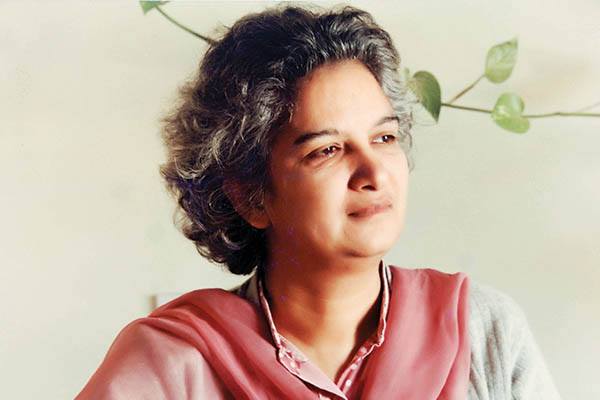 I was most restless in Delhi when I heard in mid-February that my friend Nigar Ahmad in Lahore, who had been ill, was on a ventilator in an ICU. All I wanted to do was to be with Nigar’s family — which has also been my family for 38 years — and her close friends, who have also been my friends.

But relations between our two countries at the official level are so fraught and the visa regime so complicated that I just hoped upon hope that she would pull through, because she had done miracles in the past. When she passed away Feb. 24, 2017, my restlessness grew worse.

Syeda Hameed was visiting Pakistan for the Lahore Literature Festival at the time, and represented Nigar’s friends and admirers from India at the Soyem. After returning to Delhi, she introduced me to someone at the Pakistan High Commission and I applied for a visa. I am grateful for their prompt response and compassion – they granted me the visa the next day, March 4. I left for Lahore on March 5 via Amritsar and Wagah border.

While in Delhi earlier, to deal with my pain and loss after Nigar’s passing, I decided to pay my tributes to her and celebrate her where I could. I organized small gatherings of friends who knew Nigar. I spoke about her at public speeches I gave in Delhi, taking along a banner I had got made: “South Asian Feminists Salute Nigar Ahmad”. One speech was in a Delhi University College and another was in Jamia Milia Islamia, where I delivered the Annual Sarojini Naidu Memorial Lecture organized by the Sarojini Naidu Women’s Studies Centre.

Talking about Nigar with friends and introducing her to young feminists in India gave me some peace and solace. It also introduced young feminists and students to our cross-border friendships and solidarity.

When I reached Lahore, Nigar’s colleagues from Aurat Foundation received me at Wagah. We went to Nigar’s and my friend Samina Bano Rehman, one of the founders of Women’s Action Forum, Lahore, and of the prestigious and innovative Lahore Grammar School.

I joined Nigar’s family and scores of friends in Lahore on March 8, when Women’s Action Forum organized a memorial meeting at the home of Abida Hussain or Chandi as friends call her. Nigar and Chandi had been friends since their school days.

Chandi shared a story that day. At the age of 11, Nigar founded an organisation called “Happiness Society”. She was the president and Chandi the secretary. No other members joined. Around the same time, she told Chandi that she had taken an important decision about her life — to become a nun. That ambition did not last.

Along with many close friends and family members, I also spoke on this occasion and paid tributes to Nigar on behalf of South Asian feminists.

I went to Islamabad to meet more friends. We had a reunion of Sangat alumna and a One Billion Rising event with feminists from Islamabad, Peshawar, Gilgit and other places. We also paid tributes to Nigar and celebrated her life. The eminent feminist and poet Kishwar Nahid read her poem about Nigar and some other poems, on popular demand.

The first time I landed in West Punjab was in 1946, when I arrived on this planet in a tiny village in District Gujarat. My immediate family then lived in Rajasthan. My mother was pregnant when she and my father went to visit his family in Shaheedanwali, near Mandi Bahuddin for a wedding. That is where I was born. I am proud of this accidental arrival in Punjab. None of my siblings, three older and two younger, had this luck. I have often wondered if this accident of birth resulted in my working at the South Asian level for over four decades now.

The place of my birth became a foreign country a few months after I was born. None of us could go there again. The next time I visited Pakistan was in 1983, thanks to Nigar. The Family Planning Association of Pakistan (FPAP) was looking for a trainer/consultant to help them plan their women’s activities, Nigar suggested my name. Dr. Attiya Inayatulla was the chair of FPAP at the time, Suraiyya Jabeen was the head, and Fareeda Sher the women’s program coordinator.

When they invited me for about a week, my happiness knew no bounds: it was my homecoming.  Since then I have visited Pakistan almost every year for some meeting, workshop, course or another organised by non-government organisations like Applied Socio-economic Research (ASR), Aurat Foundation, NRSP, RSPN, SAP Pakistan, Rozan and others.

Nighat Said Khan, the founder of ASR and I organized and conducted three memorable capacity building week-long workshops for young feminists in the 1980s in Bhit Shah, Sindh, Changa Manga and Ghora Gali near Murree. I formed lifelong bonds with about 90 Pakistani feminists, many of whom have led the women’s movement there. They included Shahla Zia (Shelly), Nigar Ahmad, Shahnaz Ahmad, Nasreen Azhar, Anis Haroon, Najma Sadiq, Rehana Hakim among others.

I first met Nigar in January 1979 in Thailand, where I worked with the UN and lived with my husband Baljit Malik and our three-month old daughter, Meeto. Baljit was doing a consultancy with the Economic and Social Commission for Asia and the Pacific (ESCAP) and helping to coordinate a study on poverty in Asia. Nigar worked at Quaid-e-Azam University, Islamabad, and was part of the team doing this study in Pakistan.

She had just got married, and I remember the first thing she brought out of her bags and put on her bedside table in the hotel room was a big photo of her husband Tariq Siddiqi, a brilliant civil servant in Pakistan. This was my first glimpse of what turned out to be one of the most loving and caring (and long lasting) marriage and partnership that I have seen.

I learnt that Nigar’s love was unconditional for everyone. She did not say, I will love you if you do this or think like this. If she liked you, she loved you and that love and friendship was forever.

Our relationship was both personal and political. We worked together to increase cross border contacts, friendships and cooperation. She became an integral part of several South Asian people’s initiatives like Homenet South Asia, and visited India for many conferences organised by the Indian Association of Women’s Studies, UN Women and others. She participated in several regional initiatives led by UN Women. For many South Asian feminists, Nigar remains one of the prominent faces of feminists in Pakistan.

Nigar, one of the founders of Women’s Action Forum (WAF) and the founder of Aurat Foundation, was like a nursery of socialist feminist ideas and actions. Through her reading, research, dialogues with WAF and other groups, she polished and honed ideas, developed visions and programmes, and then spread them all over Pakistan through the increasing Aurat Foundation network. She did not allow feminist purism to limit her outreach. She turned ideas and hopes like women’s rights, women’s political empowerment, and women’s leadership into a reality for a large number of women.

We shared a love for music and humour. Whenever we were together, we sang and we laughed. She taught me a humorous qawwali they had created in Kinnaird College in the 1960s. I improvised it and included it in the CD of feminist music that our feminist network Sangat produced for our One Billion Rising campaign in India two years ago.

Once when I was visiting Lahore, Nigar literally locked me up and ordered me to write some songs for Aurat Foundation’s national campaign on women’s participation in local government bodies. I wrote several songs which Aurat Foundation included in the CD they created. Later, for our campaign in India on the same issue, we used songs created by Aurat Foundation. Such give and take across our countries continues.

For nearly 40 years, my entire family and I have enjoyed Nigar’s love and hospitality. Her home in Pakistan has been our home. Our homes in India have been homes for her extended family. My daughter Meeto was at Oxford with Nigar’s son Bilal, and was close to them both. When Meeto passed away at just 27 in 2006, Nigar and Tariq Bhai came and stayed with us for ten days in Delhi, providing solace and strength.

Eight days before Nigar left her body, my husband Baljit, through whom I had met Nigar, also passed away. I wonder if the two of them are meeting in the spirit world. I am sure there they do not require visas to meet.

At Sangat, we have a slogan which expresses our vision and dreams:

I am not the wall that divides
I am a crack in that wall.

Feminists like Nigar are cracks in all the walls that divide us: walls of ideologies, disciplines, religions, nationalities. This is why Nigar is both Local and Global, Personal and Political; she is Theory and Practice, she is Pakistani and South Asian, she is yours and she is mine.

I salute you friend, sister, comrade, Nigar Ahmad and I promise you that for the rest of my mortal life, I will continue to struggle for our shared dream of human rights, justice, freedom, dignity and equality for all. I will continue to work for LOVE, which binds you and me across all borders.

The doors to Pakistan which you opened for me remain open now. As in the last many years I hope to visit the country of my birth regularly to be with your family members and friends, who are also mine.

Nigar, you have not gone anywhere. From your body you have shifted to the hearts of all those who love you. You will live in us as long as we live.

Kamla Bhasin is a feminist, poet, author and social scientist based in New Delhi. Her developmental work spans 35 years, focusing on gender, education, human development and the media. This piece is published in collaboration with the peace initiative Aman ki Asha

Youth group brings India-Pakistan students together over a Skype discussion Pakistan, India must follow No Arrest policy for fishermen