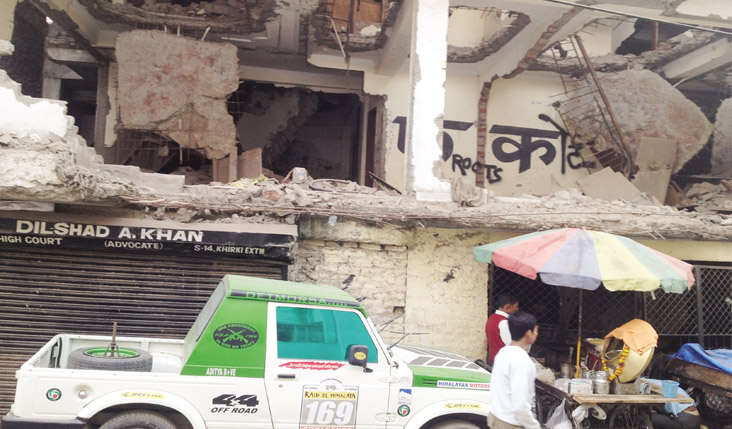 Visiting Delhi as a Pakistani, despite the visa restrictions and police reporting, no one treats me as a foreigner and I feel free to roam…
By Sehba Sarwar

In the dim light before dawn, as the taxi meanders between neighborhoods to find Singh Sons Hotel, I catch sight of an elephant with its owner plodding along the street. Rubbing my eyes, I peer out of the window but the bulky sight is left far behind in the winter darkness.

Later when I tell my Delhi-based friend Fawzia, she nods: “People rent elephants for weddings, she tells me. “They walk to different parts of town, and sometimes they have to start that early to cover thirty miles.”

I’m used to sighting animals along Karachi streets where camels, horses, donkeys – with carts and carriages or without – often slow down traffic. Animal owners depend on them for transportation and income, but this was my first time of an elephant on a street.

But then, after the twenty-four hour journey from Houston to Delhi, all I want is to collapse on a bed. At the hotel – where I spend my first eight hours before moving to Fawzia’s house – the hotel owner wants to photocopy my passport. I oblige him, but a few hours later, I’m woken up by the jangle of my bedside phone.

The hotel owner sounds worried. “I need to get your police reporting form,” he tells me. “We must have photocopy of form.”

I remember police reporting from more than thirty years ago when I flew several times to Delhi from Karachi with my mother and siblings. Back then, my sister, brother and I didn’t even have passports. We were simply names hand-written in our mother’s passport. Even back then, as a Pakistani visiting India, she had to report her arrivals and departures to the police.

Since those early visits, I have returned to India a couple of times as an adult. The first time was as a graduate student when I interned at The Telegraph in Kolkata. Back then, I managed to get a police-exempt visa, and a decade later I returned as a tourist on my American passport; no police-reporting required.

But since the Mumbai attacks, the process for US-based Pakistanis holding dual nationality has changed. Those who wish to apply on US passports have to relinquish their Pakistani nationality or else apply on their Pakistani passports. I chose the latter option, which means restricted travel to an approved city or two (not a visa for the country), and police-reporting.

And in the end, the reporting process isn’t cumbersome. My friends drive me to the Old City near Turkman Gate to an office marked with a sign, “Pakistan National Registration Office”. Inside, the office is clean, dotted with rows of empty chairs. Behind the counter sit a couple of men. The older man on the podium to the side gives me a number.

When my number is called, I approach the expressionless young man behind the counter. Without looking up, he asks for my passport and for my host’s identification card. Taking the form stapled to my passport, he stamps it at various places and shakes his head. We are done. The entire process takes about 30 minutes, not counting the long drive to Asaf Ali Road.

My friends and I celebrate getting done with bureaucracy by stopping at Bengali Sweets, a chaat shop down the street. We sit amongst businessmen, romantic couples, housewives and office workers to devour pani puri, dahi vada and rasmalai.

Over the next few days, while my friends are at work, I rent a car and driver to get around. The driver, a young man who has recently moved to Delhi from a nearby village, is intrigued that I’m from Pakistan. “We are going to go to a big war,” he tells me. “Not with Pakistan – you are our sisters and brothers – but with China. And we will win.”

When I ask him what he thinks of the new government, he nods approvingly. “They are good, much more efficient.”

He restates his point when he takes me back to report to the police prior to my departure. “See how clean the office is?”

Rakshanda Jalil at Sindh talk: Delhi. Photos by the writer

I report his words to my friends, and they say: “This is the scary thing about India today. The youth and how they believe in the army and Indian superiority. This will be our undoing.”

My friends are concerned about the mass conversions to Hinduism that are taking pace in Aligarh and Lucknow, to name just a few cities.

Back in Houston, the first question my Indian friend Yaksha asks is, “How did my people treat you?”

I nod. “Just fine. I never felt different from anyone.” And certainly, my time in Delhi was just like being in Karachi; all borders were erased.

In the end, the only things that I found different from being in Pakistan were the elephant that I never saw again and the freedom on the streets – even though Delhi is not the safest place for women.

Certainly, the autonomy that I enjoyed was connected to education and privilege, but the open environment was refreshing, something that I don’t experience in Karachi any more. When visiting universities, I didn’t need to go through metal detectors. Through my entire visit, I was able to wander in and out of the Indian International Center (IIC) where many seminars and book launches occur. No one asked to search me, or questioned who I was.

Instead, in that space, I had many border-free encounters: one evening, I ran into Pakistani poet Kishwar Naheed who was about to give a reading. I also had a spontaneous visit with Nandita Bhavnani, a Mumbai-based academic who’s submitting work for my Houston-based arts organization’s publication. I was introduced to her via a Karachi friend, and she was in Delhi to give a talk on post-partition Sindh since that’s where her family comes from.

And aside from open intellectual borders, I also felt free to roam – within the city (since I only had permission to be in Delhi, Aligarh or Allahabad) – just as did the couples wandering along the streets. Youngsters went to bars to dance and drink without worry of being busted. At night I withdrew money from ATM machines without fear of being robbed. At a family luncheon, I sipped wine with elderly, sari-clad khalas.

My visit was short, but I was able to use my time well and spend time with everyone I wanted to visit since there were no city shutdowns, strikes or bomb blasts. Yet, as I boarded my plane, I felt a sense of sorrow thinking of what Karachi was, and what it might have been had the eighties unfolded differently.

My sense of loss was exacerbated by recognizing that the people I met — artists, writers and relatives — have families on both sides of the border; we are connected to each other with similar histories. Yet, today, not many of us get to cross the borders, and certainly, we cannot move around each other’s countries without governmental permission.

The actions of a few have changed the lives of many. And because of the limitations, most of us are denied the opportunity to learn for ourselves that there is no real border.

Sehba Sarwar is a writer and artist who has published and exhibited work in India, Pakistan and the US. Website: www.sehbasarwar.com

"If you want to read Manto, you will find him" Briefs