Needed: A change of heart 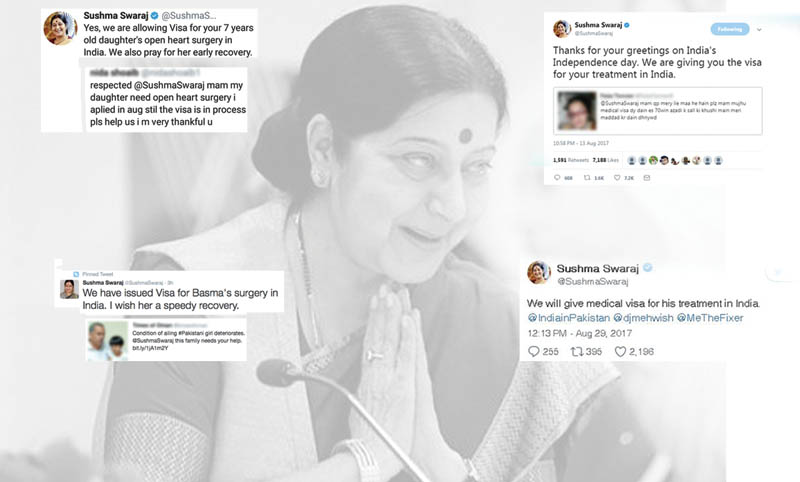 Sixty to seventy thousand children in Pakistan are born with congenital heart disease every year. A shortage of doctors has pushed people to seek treatment across the border but the Indian embassy has become a lot stricter with issuing medical visas

Each morning Rida’s parents in Quetta check their phones and emails anxiously in hope for a positive response to their medical visa request to India. One-and-a-half-year-old Rida has Tetralogy of Fallot, a type of heart defect present at birth which comprises four hindrances including a hole in the heart, an obstruction from the heart to the lungs, misplacement of blood vessel aorta and thickening of the muscle surrounding the lower right chamber. If not treated, this condition can result in severe breathing problems. Even now a balanced diet has to be ensured, otherwise minor ailments like a cold can lead to serious issues. “Her hands and feet turn blue due to lack of oxygen,” shared Tania, Rida’s mother.

Rida’s parents are not satisfied with the response they received from local hospitals. “We took opinion from doctors in Quetta and Karachi,” said Tania. “In three separate inspections, the echo results were different. In Karachi, the doctors said surgery could be performed after three years. Our son also had the same condition and was successfully operated in India three years ago, so we contacted the Indian doctor for Rida too, he told us that surgery could be performed there immediately.”

Doctors in India may be willing to help, but the growing hostility between the neighbouring countries has made it increasingly difficult for Pakistani to get visas, even for medical reasons. “Indian embassies have strictly stopped issuing visas for now. We are hoping and trying our best to reach a breakthrough,” said Rida’s worried mother.

In a country of nearly 200 million people, Dr Hasan is among the 21 pediatric cardiologists and 4 fully qualified pediatric cardiac surgeons providing their services in Pakistan.

“A fully functional, state-of-the-art centre with doctors who are specifically trained for such pediatric cases does not exist in our country,” laments Dr Hasan. “Children’s Hospital in Lahore is the only exception. The rest of the country has three centres that have this facility, including Karachi’s National Institute for Cardiovascular Diseases (NICVD) and Agha Khan University Hospital (AKUH) which has made great strides in this field.

“A surgeon needs 20-25 years of training, but even the echo cardiogram and cardiac bypass personnel require years of work hours, skill development and mastery to get to a point where they have the ability to deal with such complex cases.”

At the end of 2017, the Sindh government inaugurated a number of NICVD’s across the province that promise “no Pakistani would have to go abroad and pay heavy cost for cardiac procedures” but only time will tell how well these institutions fare.

Most trained surgeons in Pakistan prefer to leave for the oil-rich Gulf, where there’s better pay and quality of life for doctors and their families. This leaves Pakistan short of skilled doctors. The lack of institutions and trained surgeons in the country means that only 3,000 to 4,000 children with congenital heart disease are operated upon, leaving a backlog of several thousand cases. Sadly, many aren’t healthy enough to wait for help.

Pakistan is one of four countries that contribute the most to the yearly volume of paediatric congenital cases in the world. The others are India, China and Indonesia. The main reason is high birth rate.

Initially ‘high visibility’ targets, such as actors, artistes, and singers would be subjected to the tactic in an effort to gauge the impact of the move, eventually leading up to a possible blanket ban on all Pakistani visitors seeking an Indian visa.

While Pakistan struggles to deal with this complex disease with only a handful of experts and institutions, in India more than 30 hospitals have world class facilities to treat congenital heart defects.

Unsurprisingly, many Pakistanis cross the border in search of better facilities and treatments. Indian hospitals have reportedly received upto 500 Pakistani patients in a month, when visas were easier to acquire, with many requiring a liver transplant or kidney-related treatments. However, soaring tensions between the two countries remain an impediment in gaining permission to travel, as is the case with Rida.

The situation was not so bad until this year. In November 2017, Indian External Affairs Minister Sushma Swaraj asked the embassy in the United Arab Emirates to grant a medical visa to a Dubai-based Pakistani family whose son was suffering from a rare heart disease. The minister responded to the father Touqeer Ali’s tweet 12 hours after receiving request for help. In another swift reply to a tweet by Ali Shahbaz, a distressed father of a 16-month-old child in Lahore, the Indian minister directed the Indian Embassy in Islamabad to grant a medical visa to the family on an urgent basis. Shahbaz’s son suffered from an acute heart defect from birth and because of a late diagnosis, the required surgery could not be performed in Pakistan. The surgeries of both these suffering children were successfully performed in India.

The Indian minister Sushma Swaraj was so responsive to Twitter requests placed by Pakistanis for visas on medical grounds, that the exchanges have been termed ‘tweets that save lives’.

However, lately the tweets seem not to chirp anymore. In a report published last year, Indian Express claimed that New Delhi is planning to slow down the issuance of visas to Pakistani applicants as a form of retaliation for Indian spy Kulbhushan Jadhav’s death sentence. The report said that initially ‘high visibility’ targets, such as actors, artistes, and singers would be subjected to the tactic in an effort to gauge the impact of the move, eventually leading up to a possible blanket ban on all Pakistani visitors seeking an Indian visa.

Faiz Kidwai, who coordinated the Heart to Heart initiative of the Rotary Humanitarian Trust in collaboration with Aman ki Asha, a joint campaign between Jang Group of Pakistan and Times of India, said that earlier it used to take 15 days for an Indian medical visa to be processed, but now there is total uncertainty. “Due to political conditions, the programme has slowed down,” grieves Kidwai.

Faheem Jawad, a Karachi-based small businessman, had to wait three months before he could get a visa in March this year for the treatment of Tetralogy of Fallot for his two-year-old son, Maier. His doctor in Karachi suggested a trip to India since there is a higher success rate there. Even though the surgery is possible in Pakistan, the post-operative care is not adequate.

Despite multiple visits to the Indian embassy, Maier’s parents were unable to get a visa. They also noted that only Pakistanis require medical visas. “South Asians of other nationalities like Sri Lankans, Bangladeshis and Afghans can head to India without any trouble, especially with medical cases of children”, Jawad had then shared with the media. Even his attempt on Twitter failed to gain Sushma Swaraj’s attention.

“It was mainly due to the effort of journalists that Maier was able to get a visa,” Faheem Jawad said.

On March 8, Aman Ki Asha and Times of India simultaneously published the story of the toddler in their respective publications. On March 13, the Indian High Commission in Islamabad phoned to let them know that the visa would be granted.

Along with Maier, one-year-old Muhammad Ayan, suffering from the same condition, also travelled to India after a similar campaign helped him get a visa. Although his surgery was successful, sadly the little boy passed away. Maier, on the other hand, is back home and recovering.

Maier’s treatment in India cost his parents nearly 800,000 Pakistani rupees, if the surgery had been performed in Karachi, it would have cost them 1,100,000 rupees. India, a hub of medical tourism, attracts hundreds of patients every year from Pakistan as well as all over the world. According to the 2015 Grant Thornton report, the medical tourism industry in India is worth $3 billion and with an expected 20 per cent increase in the number of medical tourists coming to the country, the industry is predicted to touch the $8 billion mark by 2020.

While Maier’s father was all praises for the facilities in India and the staff’s overall behaviour, he lamented the fact that he could not get the same privilege in his own country. “If the same facilities were provided in Pakistan, we would have been more than happy to get Maier operated here,” says Jawad. “There is no role of the government anywhere, they have no reach. They could not help us even in getting the visa.”

Rida’s parents couldn’t agree more. “We literally travelled across the entire country for our son but eventually we had to cross borders for his treatment,” says Tania.

Medical experts also deplore the lack of facilities and lethargy of the government in Pakistan. “The government has shown no interest in these cases,” says Dr Babar Hasan. “International donor agencies which fund research or care in our country are more interested in contagious diseases. When you don’t have a major body funding research even creating awareness of such diseases is difficult.”

This year, the federal government slashed its development budget for the next fiscal year by half, allocating Rs25 billion for 57 development projects under the Health Ministry. With the country spending 0.5 to 0.8 per cent of its GDP on health for the last 10 years, little headway is expected to be made in the case of children with congenital heart diseases.

But experts see a glimmer of hope. “The private sector has pitched it (congenital heart diseases) as a cause,” shares Dr Hasan. “The spectrum is going to change and we will see a transition. Purely paediatric trained surgeons and cardiologists of Pakistani origin are returning from abroad, while training is also being imparted locally,” elaborates Dr Hasan.

Meanwhile, many await a visa to travel to India. “More than a 1,000 surgeries have been performed in the past for children from India and Pakistan through the efforts of Rotarians from both the countries. But now, for the first time in my life that I feel reluctant calling my friends in India for support as I don’t want them to face a difficult situation at the hands of extremist elements in their country,” Faiz Kidwai admits, although presses on since he believes that “the ray of hope is always there”.

While most politicians and other statesmen in our country clutch their feeble hearts whenever there is an accountability case on them and do not hesitate to even travel abroad for ‘cardiac’ treatment, patients requiring open heart surgeries, especially infants, suffer due to inadequate facilities in Pakistan. Although our next door neighbour can help us, the rising political tensions have prompted a closing of doors.

In 2016, India committed to contribute USD1 million annually to the Afghan Red Crescent Society to treat children suffering from congenital heart disease in Afghanistan over a period of five years. This was a commendable move, and Pakistan could also benefit from similar diplomatic efforts from both India and Afghanistan. We need diplomats to have their hearts in the right place to save lives.

The writer is a freelance journalist based in Lahore. This piece was originally published in The News on Sunday.