On eve of 75th independence anniversary, peace pilgrims from Pune bring message of love to Pakistan 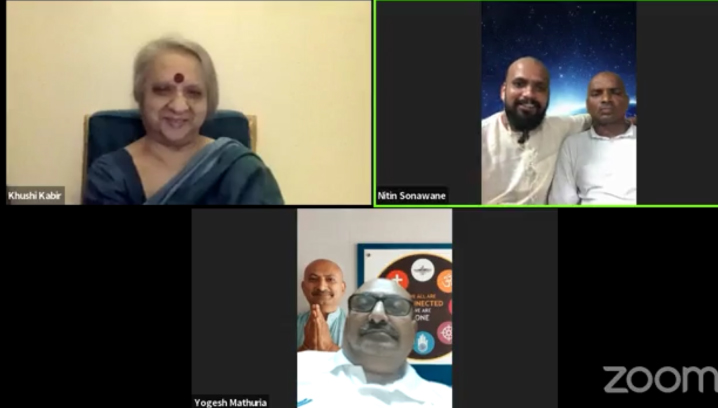 By Beena Sarwar and Priyanka Singh

(Let politicians do what they think they must

My message is that of love, let it reach where it can)

On a muggy Friday afternoon three weeks ago, three men from Pune walked across Wagah border into Lahore. They carried little baggage but a big dream.

In Pakistan for the first time, they are on a historic pad yatra, or pilgrimage on foot, for peace — at least in the three cities they have visas for, Karachi, Shikarpur and Lahore. In each city, they have interacted with members of the public on the streets, as well as at meetings with groups like Rotarians, journalists, and students.

The last such initiative was a quarter century ago, in August 2007, led by late Indian activist Nirmala Deshpande, or ‘Didi’ (sister) as activists across the region lovingly called her.

They will participate in peace events in Amritsar, meeting up with the Aaghaz-e-Dosti (Start of Friendship) youth group from Delhi. All the marchers will return to the Attari-Wagah border after sunset to light candles in solidarity with activists in Pakistan.

This is part of a long tradition of celebrating the two countries’ independence days together, started by activists like the late Dr Mubashir Hasan, Nirmala Deshpande, Asma Jahangir, Kuldip Nayar, and others.

Peace groups on either side have been doing this for a couple of decades now, even as administrations in both countries try to prevent them.

Former ambassador of India to Pakistan Mani Shankar Aiyar and his “Group of Indian Friends of Pakistan” comprising over a dozen prominent writers, former diplomats, and activists also wanted to be in Pakistan “in the forenoon of 14 August to felicitate Pakistan on the 75th anniversary of its Independence and double back to be in Delhi for celebrations of our own 75th anniversary of Independence on 15 August” (Mani Shankar Aiyar, email, 28 July 2022).

At the last minute, the visa authorisation didn’t come through.

The food of love

Meanwhile, meet Yogesh Mathuria, also known as VishwaMitra Yogesh, Nitin S. who does not use his caste name, and Jalandarnath Channole.

Hailing from the state of Maharashtra, their friends and family had tried to dissuade them from going to the ‘enemy country’.

Meeting people in Pakistan who speak the same language and look like people back home in India was then a rather pleasant experience for them.

The overwhelming love and hospitality they experienced in Pakistan has exceeded all expectations, they said, speaking at an online meeting of the Southasia Peace Action Network, or Sapan on Sunday, 31 July.

They were then in Shikarpur, a small town in Sindh, invited by Dr Amir Soomro, a physician, an “old friend” of Yogesh. Dr Soomro had visited Mumbai in 2014 and stayed with Yogesh after being introduced by a mutual friend with roots in Sindh. He is the only person in Pakistan any of them had met prior to their visit.

The pad yatrees are bound by their love for walking, and for Nirmala Didi and Mahatma Gandhi, they said in response to a question from the Sapan meeting chair, feminist activist Khushi Kabir, a Sapan founding member in Dhaka.

Another binding factor is music. The song they sing on their travels is led by Channole, a statue maker who has lived in the Gandhi Ashram at Sevagram, Maharashtra, for over 30 years. He draws crowds on the streets with his tambourine and music. The lyrics include phrases like:

prem hi pukar ho – let love be the only slogan

The refrain is “Jai jagat” — victory to the universe.

Channole stresses upon the role of people-to-people contact in peacebuilding. Ek doosre se milenge, samjhenge, vishwas badhega, tabhi dosti hogi (When we meet each other, we will understand, build trust, and become friends).

The “borders are in our minds”, asserts Yogesh.

It’s the governments that have the power to grant visas. Or not. The application process has been the most frustrating part of their experience.

The visas, despite being pushed from behind the scenes by various contacts, took months to come through. They gave personal interviews at the end of December 2021, but the visas were finally stamped in May 2022.

“It was more difficult to get a Pakistan visa than any of the 46 countries I have visited,” said Nitin S., 31. He has been walking and cycling for six years, since 130 years of Mahatma Gandhi’s birth.

Yogesh has been doing this for 15 years, since turning 50. Like the authors of a book Yogesh read as a youth, ‘Bina Paise Duniya Ka Paidal Safar’ (Walking the world without money) by Suresh Kumar and E. Prabhakar Menon, the pad yatrees carry no money. They rely entirely on the hospitality of locals for stay and food.

“This empowers us to connect with people,” explains Yogesh.

After retiring from a three decade-long career with the corporate IT sector, he has walked through multiple Indian states, Sri Lanka, South Africa, Iran, UAE and Armenia. But the place he had most wanted to visit was Pakistan. In 2014, he walked from Bombay to Wagah border but had no visa to cross into Pakistan.

Five days before their arrival in Pakistan, another Pune resident, 92-year old Reena Varma, had crossed the Wagah border. She only wanted to visit her childhood home in Rawalpindi. Her visa application had been twice rejected. She was given a visa only after the Minister of State for Foreign Affairs intervened following concerted efforts on social media.

Like the Pune pad yatrees, Reena Varma was warmly received in Pakistan.

In the run-up to the 75th anniversary of independence, such stories have captured the public imagination and underscored the absurdity of the restrictive visa regime.

The difference is that the peace pilgrims have no roots or nostalgic linkages to Pakistan.

These interactions highlight the importance of people-to-people contact and the need to continue working for a liberalised visa regime.

Reena Varma as well as the three pad yatrees have endorsed the petition coordinated by Sapan in collaboration with nearly 20 organisations, calling upon the governments to ease visa restrictions and allow freedom of trade and travel.

A large number of peace activists received the pad yatrees when they arrived at Wagah border on 22 July. These new friends then took them to Lahore’s Anarkali Bazaar. They spent several hours meeting people over food and drink.

It felt like a “family get together,” Yogesh tells Sapan News Network.

Their new friends dropped them to the railway station at 10 pm for the overnight train to Karachi – which was delayed. Fellow passengers found it hard to believe that the three were Indians. The overwhelming response they received was, “We are one”’ and “‘it’s the politicians who divide us”.

Their experience with the “lovely people of Pakistan” as Nitin puts it, counters all the stereotypes they had been fed.

Friends in Karachi put them up in an apartment in the centre of the metropolis. Torrential rains sabotaged their first planned public event. Later however, they were able to participate in several public meetings.

A week into their trip, Dr Soomro drove down to bring them to his home in Shikarpur, from where they joined the Sapan meeting. Yogesh is moved by the Soomros’ hospitable gesture of vacating their own bedroom for the Indian guests.

“They had memories of our hospitality in Mumbai, which I don’t even remember. I guess that’s how we Southasians are with our guests,” says Yogesh.

There were several public meetings and street walks in Shikarpur too. The pad yatrees were particularly moved by the response they got from young people.

A week later, Dr Soomro drove them to Lahore, a nearly 10-hour journey by road. Staying at the hostel of the Human Rights Commission of Pakistan, they have spent the past days meeting more people, overwhelmed by the love and care. Young science educator and Sapan member Waqas Nasir brought over home-cooked vegetarian food. A Facebook friend Haji Khan Farosh, who Yogesh terms as “almost 60 years young peace activist and cyclist”, travelled over from Swabi in north Pakistan bearing gifts.

The peace pilgrims will conclude their pad yatra with a flag hoisting programme at Gandhi Ashram in Delhi.

The Mahatma had been keen to go to Pakistan and had gone to Delhi planning to proceed to Punjab, documents his biographer Narayan Desai in My Life is My Message. He was assassinated there on 30 January 1948.

His death was widely mourned in Pakistan, with the leaders including M.A. Jinnah as well as the Pakistan parliament paying him lavish tributes and all parties contributing to the condolence messages.

The future of both peoples and countries is “inextricably linked”, noted an editorial in The Pakistan Times, edited by the great poet Faiz Ahmed Faiz (‘The First Step’, 6 February 1948). Future policies of both countries should be based “on the last will and testament of Mahatma Gandhi” it said.

“Without communal amity and without Indo-Pakistan accord there can be neither freedom nor progress for either” — the editorial’s words still ring true.

On the eve of the 75th anniversary of our independence, isn’t it time to let people meet?

Priyanka Singh is a data analyst and researcher in New Delhi. Beena Sarwar is a journalist in Boston, who has lived and worked in Karachi and Lahore. Both are founder members of the Southasia Peace Action Network, or Sapan. This is a Sapan News Network syndicated feature – www.southasiapeace.com

Note: Taking a cue from Himal Southasian, Sapan uses ‘Southasia’ as one word, seeking to restore some of the historical unity of our common living space, without wishing any violence on the existing nation states.

From the Philippines to Dubai and beyond, a groundbreaking platform for educators provides new ways to collaborate Over 30 organizations call for prompt repatriation of crossborder prisoners, including bodies of those who died in custody