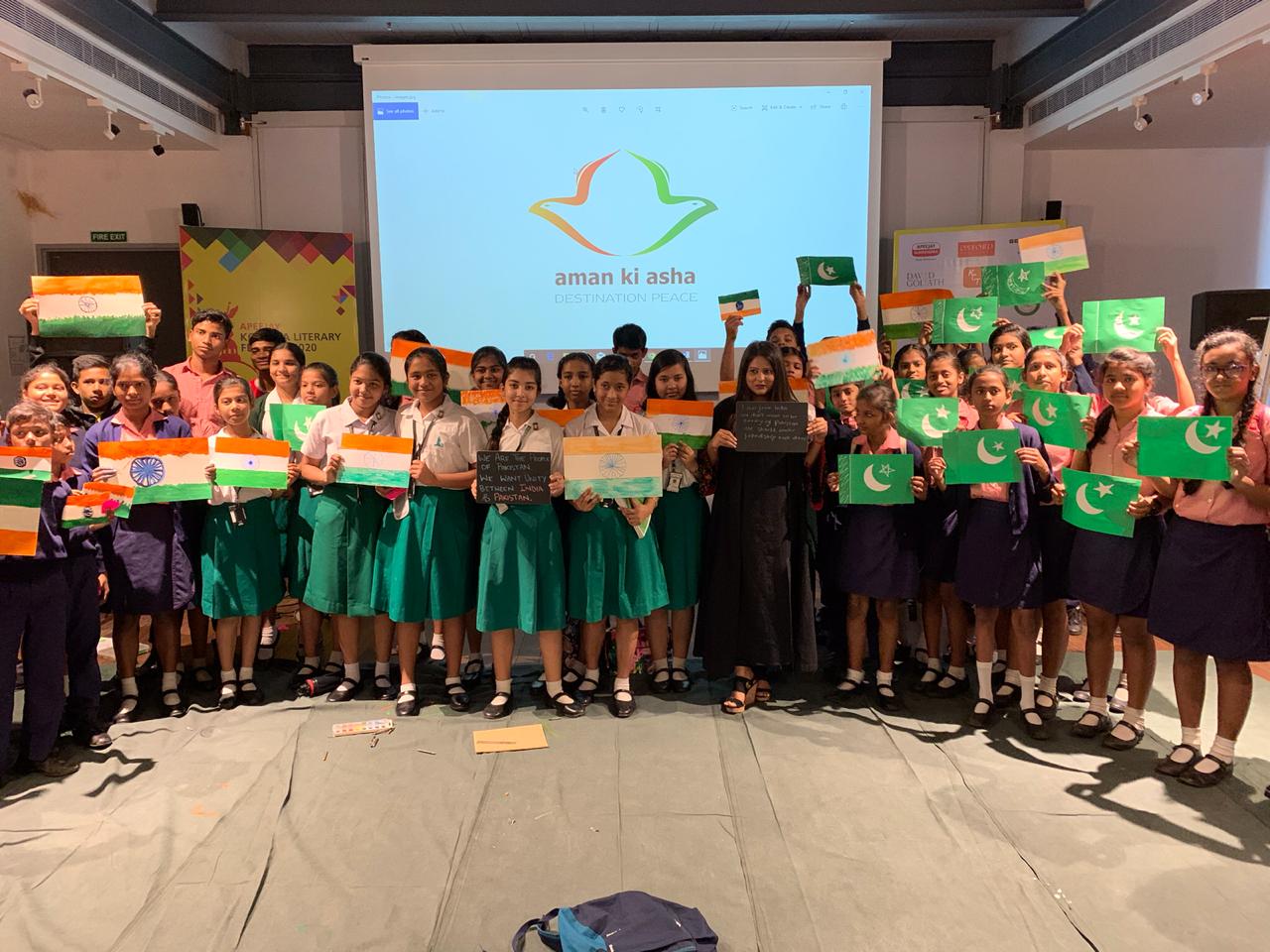 It might seem odd, even risky in the present tense atmosphere between India and Pakistan, that the Eleventh Apeejay Kolkata Literary Festival included a session on Aman Ki Asha (Hope for Peace) between the two countries, with dozens of children and adults enthusiastically joining in.

But then, as the prominent Indian leader Gokhale observed a hundred years ago, “What Bengal thinks today, India thinks tomorrow”. He has been proved correct many times since. In science, in literature, in activism, in terms of what constitutes “patriotism”, and in fact in every sphere of life, Bengal has always been a frontrunner.

Fifty-two children and their mentors as well as other interested audience members participated in the hour-long session on Aman Ki Asha that kicked off the last day of the three-day festival.

Apeejay Kolkata Literary Festival is India’s only literary festival curated by a bookstore. It is also the city’s first literary festival. Since inception in 2010, it has reflected the vibrancy of thought, engagement with the literary world at large and exploration of literature as part of its tangible and intangible heritage that characterises Kolkata.

Park Street is AKLF’s most inclusive and accessible location, housing many educational institutes of repute. Children from two such schools alongside their teachers joined the interactive AKA session, featuring power point presentations and videos, and arts and crafts activities like making flags, both Indian and Pakistani.

The session began with the stirring Aman Ki Asha anthem penned by the veteran poet Gulzar and sung by Pakistani music sensation Rahat Fateh Ali Khan with popular Indian singer Shankar Mahadevan. The poignant anthem seeks to build bridges between the people of the two nations with its soulful lyrics ‘Nazar Mein Rehte Ho, Jab Tum Nazar Nahi Aate’ (You stay in my sight when I don’t see you).

The anthem set the mood for the morning, with several participants young and old blinking back emotions. The facilitator, poet and activist Ruchhita Kazaria divided the auditorium into two sides, one representing Pakistan and the other India. Each team then chose a captain.

The teams viewed videos from different sources that highlight the importance of people-to-people interaction between both countries. There was the Coca Cola advert featuring its Small World Machines, two vending stations, one placed in India, and the other in Pakistan, that turned into communication portals. The idea was to let the citizens of both countries see and interact with each other, even complete shared tasks.

Another film, the three-and-a-half-minute Google ‘Reunion’ advert about friendship, childhood memories, separation and reconnecting to the past, features a story told through the Google search engine.

Two other short videos shown at the event are by Pakistani-Norwegian filmmaker Aman Sheikh from A Man Film. His first India-Pakistan themed film ‘Ek’ (One) discusses the commonalities between the nations, ranging from food to music to mangoes to culture to festivals to architecture to history.

“They treat you like royalty”, she told the children. “Upon learning that I am from India, they rolled out the red carpet, unwilling to charge me for their wares”.

Made emotional by her reminisces, she also took questions from the audience.

The session ended with children painting the Pakistani and Indian flags, while each team captain wrote messages of peace and love on chalk boards, echoing the movement ideology of Aman Ki Asha.

Kazaria plans to exhibit the flags this year at an exhibition titled ‘Peace Postcards’. One of the session’s highlights was the peace and love notes for Pakistan on pink heart-shaped post-it notes, that each participant sealed in ‘love jars’, to be included in the planned exhibition.

“AKLF has been a fantastic platform for getting to interact with innocent, fertile minds, especially given a powerful topic like peace”, she says. “Children are the future. The steps they take today will pave the path for tomorrow”.

Her motivation for conducting the session was to get participants to appreciate and realise that “they cannot be terming Pakistan as an ‘enemy’ nation and as adults, we must be consciously wired to help them drop the second-hand-baggage of the visceral hatred”.

“As even their parents didn’t witness the partition, why must then these children carry forth the legacy of mindless hatred! My family has no connections with Pakistan, but I have my closest friend there like Mohsin Hassan Akhtar, who I met online through Aman Ki Asha. There is not a day where I don’t talk to someone about Pakistan and I feel a part of me belongs there. Call it a spiritual, karmic connection!”

“This was a powerful session with so much imagery and fine storytelling”, said Shruti, a Hindi teacher. “I will consciously choose peace as a subject matter in future”.

“The reality is that we love each other. What we see in the news is only politics”, said another teacher, taking selfies with the children holding flags.

The children listened in rapt attention to information by Ruchhita Kazaria about the 1,500-year-old Panchmukhi Hanuman Mandir in Karachi and Goddess Kali inside the Kalka cave in Sindh. They flipped through the pages of the coffee table book being passed around, Historic Temples in Pakistan: A Call to Conscience, that explores some 40 Hindu religious sites in Pakistan.

Authored by the Karachi-based writer Reema Abbasi who also happens to be a former project manager of Aman Ki Asha in Pakistan, Historic Temples in Pakistan was in fact launched at the Seventh AKLF in January 2016 at the iconic Victoria Memorial, attended in person by the writer.

The AKA session at AKLF this year ended with children wanting to get themselves photographed with the Pakistan flags against the Aman Ki Asha logo.

“We believe that inculcating the value and virtue of peace in our children – at a young age – is vital to building their future in a better world of harmony, love and peace, especially in the prevailing climate of discord in our times. We wish such peace initiatives every success”.

Whether Gokhale’s observation proves correct this time also, only time will tell. What is certain is that the people of both countries only want to live in peace with each other.