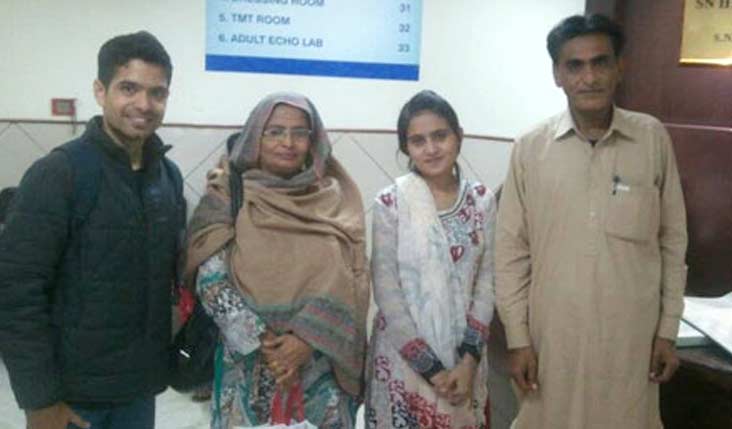 BANGALORE: “I want to study a lot and become a doctor,” says Kiran Soomro, 17. This teen from Karachi is in Bangalore to get her heart mended. And the first thing this Class V dropout wants to do on returning home is seek admission in a school.

It was six years ago when Kiran fell unconscious one day. Next thing she knew she was diagnosed with a hole in her heart. “She was a normal child and never complained of any problem,” says Sikander Ali Soomro, Kiran’s father, who followed it up with local doctors. They prescribed advanced treatment which wasn’t available locally, and asked Ali, a former Survey of Pakistan employee who now sells potato chips for a living, to take Kiran to India.

“Main bhi kisi patient ka elaaj karungi (even I will treat a patient),” says Kiran, as her eyes reflect her dreams of making it big someday. Kiran is in India under the Aman ki Asha initiative, a collaboration of The Times of India with The Jang Group of Pakistan. Her treatment and accommodation at Narayana Health in Bangalore is being sponsored by Rotary International under its Needy Heart Foundation.

A clearly nervous but optimistic Kiran is pinning her hopes on the fact that she can walk now, something that wasn’t possible even eight months ago. “I used to lie down all day and keep staring blankly at people doing things around me. I couldn’t even get up to fetch a glass of water,” says a misty-eyed Kiran.

Eldest of six children, Kiran hasn’t spoken to her younger siblings after reaching Bangalore on Monday midnight. Her mother, Shamshad Soomro, who is accompanying her daughter and husband on the trip, is worried for her children back home.

“My youngest daughter is seven but I have to be with Kiran now. It has been traumatic to see her bed-ridden all these years. We are hopeful she’ll be cured here,” says Shamshad.

While Mathematics is this teenager’s favourite subject, she also likes to dress up well, and hopes to join her friends in school soon.

Doctors to evaluate her

“We’ll do an echocardiogram and an angiogram and check if she is ready for operation. If not, we’ll put her on medication and follow up on her for the next five to 10 years. She might then require a heart and lung transplant,” says Dr Shetty.

Kiran was in Delhi last year where doctors said no to an operation because both her lungs were severely infected. She was put on medication for six months after which she returned to Karachi and started walking.

Just over a decade ago, two-and-a-half-year-old Noor Fatima came to Narayana Hrudayalaya from Lahore, Pakistan. Noor had multiple holes in her heart and a narrow pulmonary valve – a congenital heart disorder. On July 15, 2003, she underwent an open heart surgery, and returned to Pakistan on recovery. Dr Devi Shetty was little Noor’s surgeon.

In the midst of frosty ties between India and Pakistan, people-to-people initiatives like Aman ki Asha have shown that barriers break when hearts meet and people reach out. Kiran Soomro is a case in point. At a time when border conflicts, one-upmanship and blame games over terror cases rule the roost, the efforts to save a teen from Pakistan in India spell hope. With several people and organizations coming together to facilitate her medical treatment, this should be a lesson to governments that more such initiatives will minimise the mistrust and help normalize relations.

Nitu's mission: Save Kiran 'There is no love during India-Pakistan matches'