Pakistan, India and Aman ki Asha: The year that was, and looking ahead 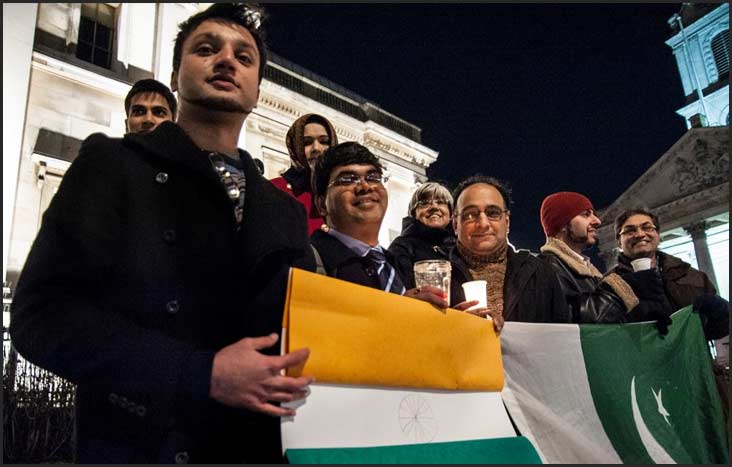 Something I wrote last week for The News year-end special supplement, published Jan 1, 2014. I later remembered many special moments I left out, like the Mumbai and Karachi Press Clubs exchanges, the border security guards allowing violators to return instead of throwing them in prison, the Indian heart patient allowed to disembark without a visa in Pakistan, to name some. There are many others…
By Beena Sarwar

For millions of Indians and Pakistanis, Aman ki Asha is just that – a shared ‘hope for peace’ between our two countries. Despite falsehoods circulated by detractors targeting this peace initiative in all kinds of underhand ways since its launch on January 1, 2010, it has stayed the course, and continued to urge both governments to do so. In the process, Aman ki Asha has provided a platform and a way forward for aspirations of peace between India and Pakistan.

The year 2013 started out with a powerful expression of these aspirations countering rising tensions due to firing and the loss of lives at the Line of Control in Kashmir. In the midst of the cacophony of allegations and counter-allegations arose voices of sanity, coming together for a global vigil for peace between India and Pakistan.

It was Samir Gupta, an IT professional in New Delhi, who initiated the global vigil idea. Aman ki Asha facebook group members discussed it and volunteered to organise vigils in different cities – Bradford, New Delhi, Boston, Los Angeles, Mumbai, Chandigarh, New York, Toronto, Karachi, Lahore, Islamabad, Shahdadkot, on Jan. 27, 2013. They brought candles and homemade placards as well as copies of a vigil statement to hand out to the public (online at the AKA website) .

Gupta attended the vigil in London, arriving at the venue straight from the airport. “Watching two Pakistanis make an Indian flag with so much love in freezing cold in Trafalgar Square – London, Priceless!!” he commented on the AKA facebook group.

The Global Vigil was just one example of ordinary Indians and Pakistanis coming together and making their voices heard against the juggernaut of the mainstream media, which disproportionately amplifies the voices of hatemongers.

The pattern typically has been that just as things between India and Pakistan are going well, something ‘happens’ to derail the process, and a cacophony of hatemongering begins on both sides, each feeding the other. This is something that people have caught on to, and predict with a certain amount of fatalism each time, responding with, ‘This was bound to happen’.

However, peace-mongers now have more tools at their disposal than ever before, thanks to the Internet and social media. It’s still not a level playing field because the hate-mongers of course also have these tools, besides the mainstream commercial media magnifying their views (sensationalism, which includes violence and hate, sells). But voices for peace at least now have a foothold in the public discourse.

India students_of_DAVAlso on the positive side, at least one clause of the suspended 2012 visa agreement has been implemented, allowing senior citizens over 65 years old to obtain visa-on-arrival at the Wagah/Attari border. Both governments granted visas to huge groups of pilgrims to pay homage at religious sites across the border, and also for Indian and Pakistani school children to participate in cross-border debates. At the collegiate level, Pakistan successfully supported India’s bid to host the Worlds Debating Championship coming up in Chennai that five teams from top Pakistani institutes are participating in.

The Pakistan women’s kabaddi team participated in an international tournament in India; and even in Kashmir, despite tensions at the LoC, both governments allowed contact in three vital areas to continue — the bus service across the two parts, trade, and interactions at the civil society level.

Prime Ministers Nawaz Sharif and Manmohan Singh finally met on the sidelines of the UN General Assembly in September. Nothing much was expected, but the fact that they were talking was good news in itself given the loud lobbies in both countries militating against such contact.

There was more room for optimism when PM Manmohan Singh on Dec 12 finally accepted Sharif’s invitation to visit Pakistan. He is known to be personally keen to visit Pakistan – and the village he was born in – but had refused all past invitations, making his acceptance conditional on the situation in terms of “terrorism” and the LoC.

The invite, delivered to Singh during his meeting with PM Sharif’s brother, Punjab Chief Minister Shahbaz Sharif, was reportedly accepted. Logistics and timing have yet to be worked out.

A Pakistani student with her host family in India

CM Shahbaz Sharif’s five-day visit to India was also historic because of the joint statement he signed with the Indian Punjab Chief Minister Prakash Singh Badal. They agreed on the need to promote the free movement of academicians, students and interns, reduce trade barriers, encouarge business and new trade routes and enable people from either side to visit religious places. They also agreed to cooperate on areas relevant to their largely agrarian constituencies. Given the clout of the two Punjabs in each country, this agreement could well prove to be a game-changer.

Aman ki Asha has played a significant role in creating a groundswell of support for such political cooperation, giving the political leadership the confidence to make such moves. Participants at AKA’s series of Economic Conferences in Delhi and Lahore, including the top political as well as business leadership of both countries, made clear their consensus on the need for cooperation on business issues, easing visas and allowing people to trade, travel and meet.

AKA strategic seminars have brought together policy makers, analysts and even the former heads of the secret service agencies RAW and ISI, who agreed that both countries need to cooperate and share information on issues like terrorism.

In the wake of such interactions India and Pakistan have made unprecedented agreements to allow each other’s banks to open branches across the border.

Laal in KolkataRetailers on both sides are doing good business. Indian movies are booming in Pakistan – back in business after some spoilsports tried to get them banned. In fact Dhoom 3 broke the record of first day collection in Pakistan.

Well-known Indian actor Naseeruddin Shah starred in the feature film ‘Zinda Bhaag’ produced by Pakistani journalist Mazhar Zaidi and co-directed by an Indian and Pakistani, Meenu Gaur and Farjad Nabi. Shah also performed in Pakistan at the invitation of the Faiz Foundation, set up to further the work of the poet Faiz Ahmed Faiz revered equally on both sides of the border.

Recently, Indian film idol Kareena Kapoor (whose family is from Peshawar, pre-partition) signed on as the brand ambassador for a new Pakistani mobile phone company.

On the other hand, Pakistani music is booming in India, with artistes like Rahat Fateh Ali and Abida Parveen revered across the border, and the passing of folk singer Reshma equally mourned by Indians fans.

Pakistani activist music band Laal has performed in several cities in India, and has been invited back for more performances soon. So has the Mekaal Hasan band. The Strings, participating in a South Asian bands festival in Delhi, was one of the three bands to be invited to perform at Rashtrapati Bhavan, the Indian President’s residence, along with Advaita from India and LRB from Bangladesh.

At the festival itself, the Strings created an unforgettable moment when they got the audience to sing along, with the crowd replacing the last word with ‘Pakistan’, in the line: “Mein Tera Tu Meri Jaane Saara Hindustan” (a repeat of their performance at an Aman ki Asha concert in Ahmedabad in Feb. 2011, with Indian Ocean).

“It was indeed heartening to see 5000+ Indian youth singing out ‘Saara Pakistan’ for Pakistan in unison,” commented Strings on the video clip posted on their facebook page.

The cricket hero Sachin Tendulkar’s retirement provided another unforgettable moment as Pakistanis joined the outpouring of tributes to him. One photo circulated online featured a Pakistani man in an Abu Dhabi stadium holding up a “Thank You Sachin” placard.

Google Reunion ad The buzz created by Indians and Pakistanis attempting to connect but able to do so only virtually appears to be behind the launch of memorable promotional material by corporate giants like Coca Cola and Google.

Coke ‘Small world machines’ installed in shopping malls in Lahore and New Delhi in May let people on either side see each other as they smiled, waved and traced hearts and peace signs on the screens. Their obvious delight this interaction – like a giant video chat without sound – was moving, despite the commercial objectives.

Google’s touching three-minute ad launched on the web took this yearning to another level. The film shows two childhood friends, now grandfathers across the divide, being reunited thanks to Google search. The aim of course is to promote Google – but like the Coke ad earlier, it rides on the huge, visible craving of Indians and Pakistanis to meet, prevented by the restrictive visa regime.

The Google ad echoed an article published in Aman ki Asha, when Rawalpindi-based writer Waseem Altaf sent a surprise birthday cake to retired banker Yash Pal Sethi across the border who had migrated from Rawalpindi after Partition. It also echoed a film by a young Pakistani, Taha Kirmani, about an old man connecting with his childhood friend across the border via Skype, after his son finds the information on the Internet.

The feelings are real and powerful and cannot be understated. The writer Gulzar, who visited his birthplace Dina for the first time since leaving it at age eight after Partition was so overcome by emotion that he was taken ill and returned to India without going to the Karachi Literature Festival, disappointing many fans there. His apology to the people of Pakistan later: ‘Mujh se naaraaz nahon’! Gulzar”.

Gulzar – Pakistan“All I wanted was a moment of solitude so I could sit and weep. But I could not get that. I just touched the salt from their hands, that was enough. That salt from my own nation. In my poems I always say, India is my country but Pakistan is my nation because that is where I was born,” he said later in an interview with Sehyr Mirza, published in Aman ki Asha.

Unprecedented initiatives this past year included the Pakistani truck Haider Ali being invited for a month to Kolkatta to decorate the Durga Puja pandal, and Pakistani journalist Kiran Nazish being invited to teach at O.P. Jindal University in India.

Sadly, Pakistan has reciprocated India’s restrictive Sponsorship Certificate requirement, and both countries continue to deny visas to genuine, peace-loving applicant. For example, India denied visas to Pakistanis invited to attend the Sufi Festival, while Pakistani denied permission to the Delhi University Students for Peace who had cycled from Kanyakumari in the southern-most tip of India to Wagah border, to cross over and cycle to Islamabad with their peace petition.

Here’s hoping that 2014 sees the two governments finally implement the long-awaited new visa regime they agreed upon in September, 2012. Let the people meet, trade and travel. Milne do.

4 thoughts on “Pakistan, India and Aman ki Asha: The year that was, and looking ahead”