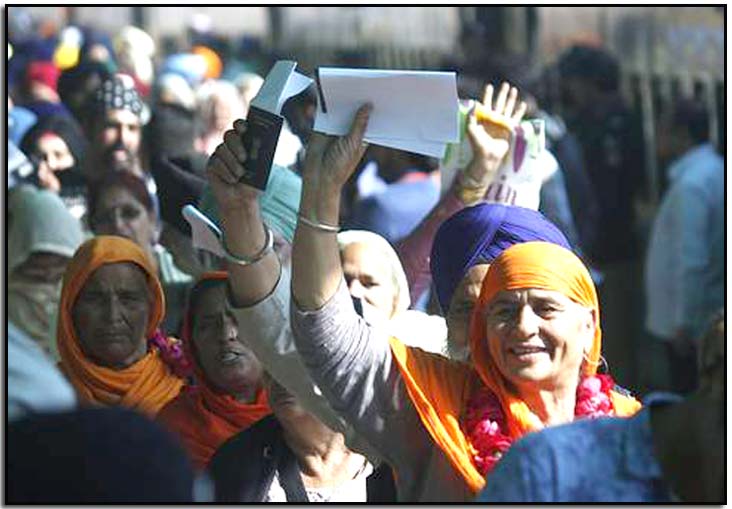 Sikh pilgrims from India arriving in Pakistan by a special train to participate in the birth anniversary celebrations of Baba Guru Nanak in Nankana Sahib near Lahore. Photo: Rana Sajid Hussain/Zuma Press

Hundreds of Sikh pilgrims have arrived in Pakistan on three special trains over the past few days to participate in the 547th birth anniversary celebrations of Baba Guru Nanak, the first of 10 Sikh Gurus. The Pakistan High Commission in India says it has issued 2,850 visas to Sikh pilgrims from India to attend the event, from Nov 20-29, 2015 in Pakistan.

Evacuee Trust Property Board (ETPB) Chairman Siddiqul Farooq welcomed the pilgrims at Wagah, saying he was happy to see a rise in their numbers. “It reflects their satisfaction with our arrangements,” he added, saying that Prime Minister Nawaz Sharif wants good relations with India.

Pakistani authorities arranged heavy security as well as food (langar) for the pilgrims as they crossed over from Wagah border and at the Lahore Railway station. The pilgrims went on to Hasan Abdal and then to Nankana Sahib, some 80 kilometers southwest of Lahore. That is where Baba Guru Nanak, the founder of the religion was born over 500 years ago.

The birth day of Guru Nanak, celebrated on Wednesday by Sikhs around the world, is known as “Guru Nayak Jayanti” (or “Gurpurab”), is considered one of the most sacred in Sikhism. Sikhs from countries other than India are also attending the celebrations in Pakistan.

The Indian yatrees also visited Farooqabad (Sacha Soda). They will stay in Lahore at the temple of Dera Nawab Sahib on Nov 26-27. On Nov 28, they will visit Darbar Sahib temple in Narowal, before returning to India on Nov 29, said an ETPB spokesman.