Pakistani-American physicians express solidarity with the people of India 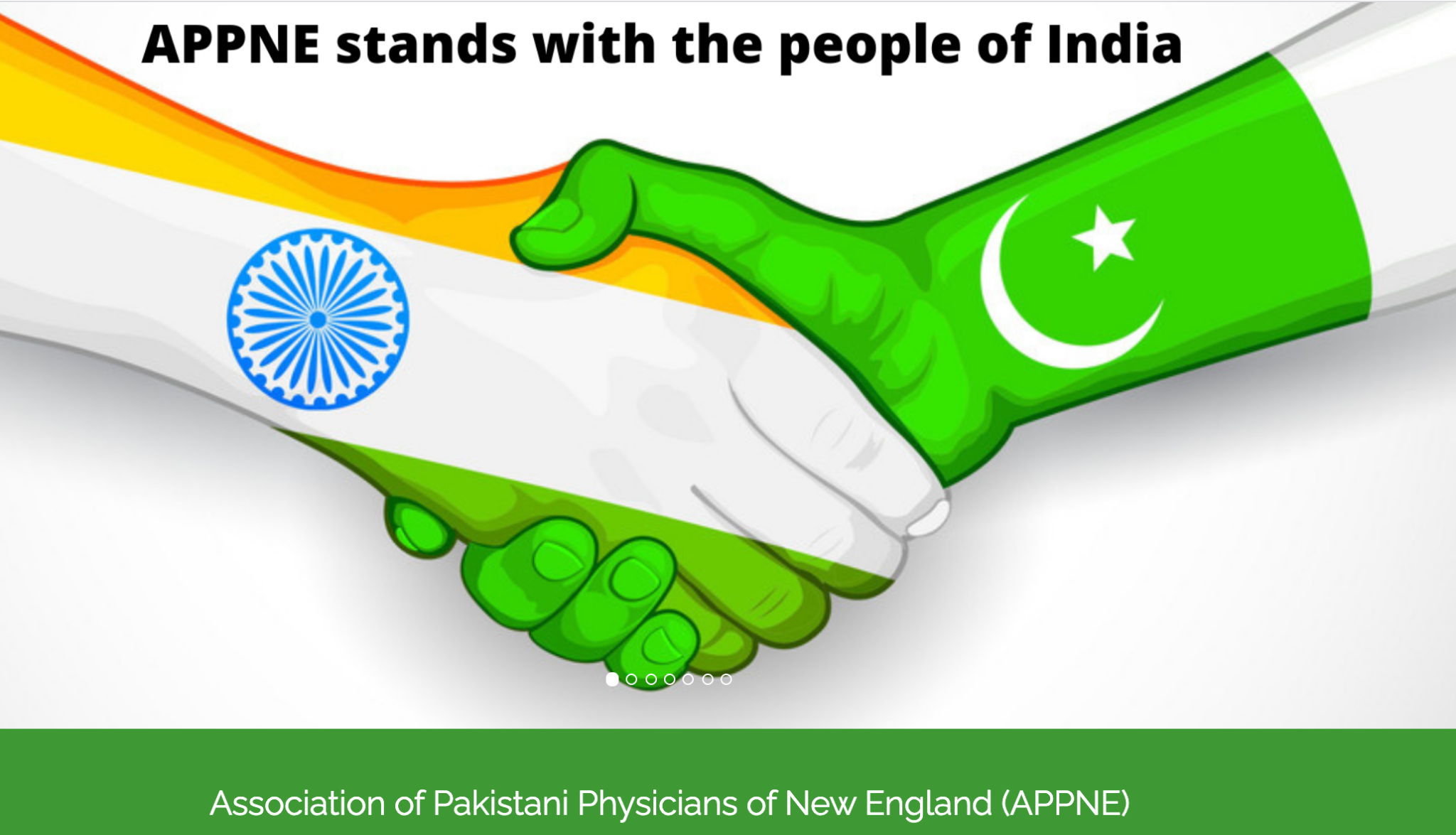 Pakistan-origin physicians based in the USA have expressed solidarity with colleagues and the people of India at this time of crisis catalysed by the coronavirus pandemic.

“We stand in solidarity with the people of India as they face the needless tragedies catalysed by the coronavirus pandemic,” says a statement online posted by the Association of Pakistani Physicians of New England (APPNE), which represents over 350 medical practitioners.

“Many of us are helping them (the people of India)  through various means, while physicians among us regularly extend pro bono telemedical help to colleagues and patients in India,” says the statement.

The initiative comes on the heels of numerous other heartwarming gestures by Pakistanis in solidarity with India. These range from the Pakistan government’s offer of help to social media trends of #StandWithIndia, to singer

Imran Hashmi’s ‘Hum Tere Saath Hain‘ (we are with you) song that has gone viral.

Since being posted online Saturday, it has been endorsed by over 130 physicians, healthcare workers, entrepreneurs, academics, businesspersons and others of Pakistani and SouthAsian origin, and allies and friends of SouthAsia. Endorsements have come from across

Pakistan and USA as well as several other countries including Bahrain, Canada, Germany, Greece, Finland and India.

The signatories extend their “deepest condolences to the families and friends of all those who have lost their lives to Covid-19 in India and stand with them in their hour of grief and pain.”

The statement also sounds a note of alarm about the potential crisis brewing in other South Asian nations.

“We fear that the crisis India is facing now has the potential to engulf other countries with similar healthcare systems. We must use the lessons learnt from the colossal tragedy in India to introspect and take urgent action now to prevent similar crises elsewhere,” says the statement.

The endorsers urge the government to increase healthcare funding on an urgent basis. “We observe the similarities between SouthAsian nations like Pakistan and India where the poor are left to fend for themselves, and even those with the means are stretched for resources when a calamity of such proportions overpowers already underfunded healthcare systems.” Arieb Azhar

“We urge all governments, particularly India and Pakistan, to use this time of crisis as an opportunity to urgently work on repairing and investing not only in their healthcare systems but also their relations with each other.”

The signatories note that, “It is beyond time particularly for nuclear-armed Pakistan and India heading into the 75th year of independence from colonial rule to work actively to decrease hostilities and spend more resources on health and education.

“This is imperative for the sake of our coming generations and the future of our planet.”

The statement is endorsed by APPNE President Yousaf Shaikh, MD, as well as APPNE past presidents Jamila Khalil and Salman Malik, along with the organisation’s active executive committee members and board members. Well known physician-activist Amna Buttar is also among the signatories.

The Association of Physicians of Pakistani descent of North America (APPNA) also has a good representation on the statement so far, with endorsements from past President Naheed Usmani, Rizwan C. Naeem, past President NY chapter, Lubna Naeem, former Secretary and Treasurer.

Dr Dhrumil Shah, President, Indian Medical Association of New England (IMANE) has also endorsed the statement of solidarity with his country of origin.

The Pakistan Association of Greater Boston (PAGB) is there with the endorsement of its elected President Siraj Khan and various members.

The online petition is open to the public at Change.org.

SAPAN declaration and endorsements at this link