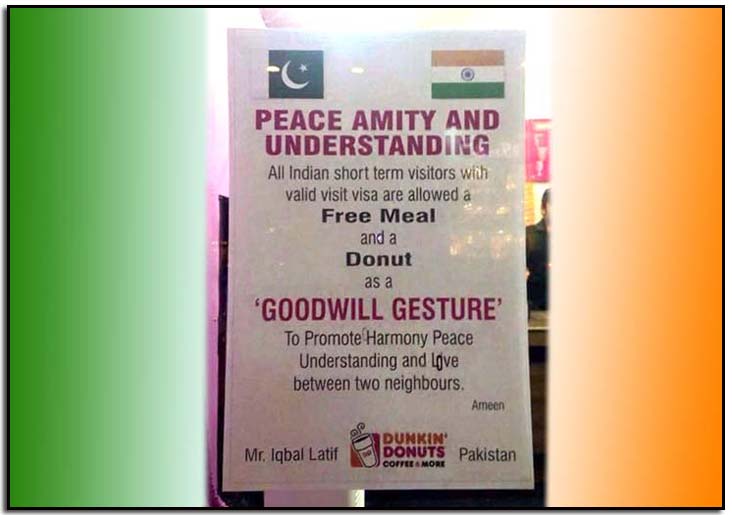 Dunkin' Donuts sign in Islamabad with the Pakistani and Indian flags: peace meal

The owner of an American fast food chain in Pakistan is offering free meals to any Indian visiting the country on a short-term visa, in a novel reaction to reports about a Pakistani family being refused accommodation by hotels in Mumbai.

Iqbal Latif, who runs 26 franchises of international food chain Dunkin’ Donuts in Islamabad, Lahore and Peshawar, took a leaf out of Mahatma Gandhi’s book to show how neighbours should be treated.

Talking to BBC Hindi radio, Latif said, “We should not become hostage at the hands of some people, we should take forward the the teachings of Gandhiji who preached love and coexistence all his life.”

Latif’s free-meal offer to Indians went into effect last week and the response has been overwhelmingly positive. He took the initiative after reading reports about hotel owners of Mumbai’s Bhendi Bazaar area having refused accommodation to a family of six people from Karachi last week, following which they had to spend the night on the streets.

The family was reportedly being refused accommodation as they did not possess the ‘Form C’ — which is to be submitted to a government department if people from outside the country come to the city on a visa and stay in their lodges and hotels, according to the Press Trust of India (PTI).

Latif said that he felt bad on hearing that a family had to spend part of the night on a footpath near a police station and another part at a pavement at the railway station.

“I want to show Indians that Pakistanis genuinely love and care for them,” he told BBC Hindi, mentioning a couple of other incidents since then.

These include the Shiv Sena blackening the face of Sudheendra Kulkarni, chairman of the Observer Research Foundation, for inviting former Pakistan foreign minister Khurshid Kasuri for the launch of his book, Neither a Hawk Nor a Dove: An Insider’s Account of Pakistan’s Foreign Relations.

The Indian media, he said, portrays Pakistan as being a country that hates Indians but the reality is very different.

“There is no hate for India here. We all love India. 1.4 billion people love each other. We are only marginalised by a few hate mongers on both sides. I propose such initiatives on the people-to-people level help make bridges,” said Latif, who terms himself as a “bridge-maker”.

Being kind is good for business. Since Latif took the initiative sales have gone up by 30 per cent, showing that people support the move.

On the first day, the Dunkin’ Donuts outlet in Islamabad’s Diplomatic Enclave served 17 meals to Indians. This morning two Indian men came in for coffee at one of the Lahore outlets, primarily to say thank you, Latif told BBC Hindi.

He said he was initially apprehensive about displaying Indian flags in Peshawar, but visitors waved in approval. “People have given high fives instead,” he said.

He said he has received no threat or angry response from anyone in Pakistan. There has been no interference by Pakistan’s intelligence agency, and Latif’s friends in the Pakistan army have called him to appreciate the gesture.

“Where is the hate and stone throwing of Shiv Sena? Only a degenerated mind does it. We need to tell (Sena) to grow up.

Love conquers all,” he said.