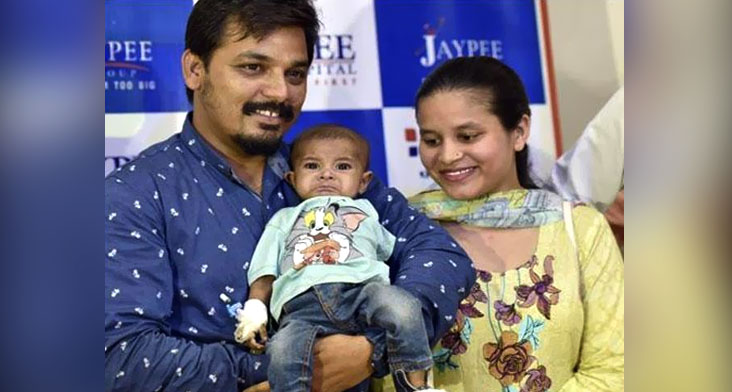 NEW DELHI: Pakistani infant, who had a hole in the heart and Indian External Affairs Minister Sushma Swaraj had intervened in the case and arranged medical visa for his parents, has returned to Pakistan after receiving treatment in the neighbouring country.

According to Indian media, four-month-old Rohaan received treatment at a private hospital in Noida where he made a full recovery before he with family left for Pakistan on Tuesday.

Rohaan along with parents arrived in Noida after they received visa on the intervention of India’s External Affairs Minister Sushma Swaraj following his father highlighted son’s health condition on the social media.

Rohaan has a hole in his heart and was referred to the multi-speciality hospital for treatment. However, in the backdrop of cross-border tension between India and Pakistan, his parents were unable to get medical visa for their child’s treatment in India.

However, they received visa after Swaraj intervened.

The child was brought to the hospital on June 12 and his surgery took place on June 14. In the five-hour-long surgery, the aorta and arteries were adjusted to their right places and an arterial switch with VSD closure method was applied.

After a month of observation, the child was discharged on Tuesday after which he left for Pakistan with his parents.

Rohaan’s father expressed his gratitude to the doctors and to Indian External Affairs Minister Sushma Swaraj.

Lahore-based parents of Rohaan — father Kanwal Siddiq and mother Anam Siddiq –said “Thank You India. Thank you for everything. The past one month has been a spiritual and emotional journey for us. There was a time when we feared losing our son.”