“Pakistani! This is Kolkatta, this is Bengal” 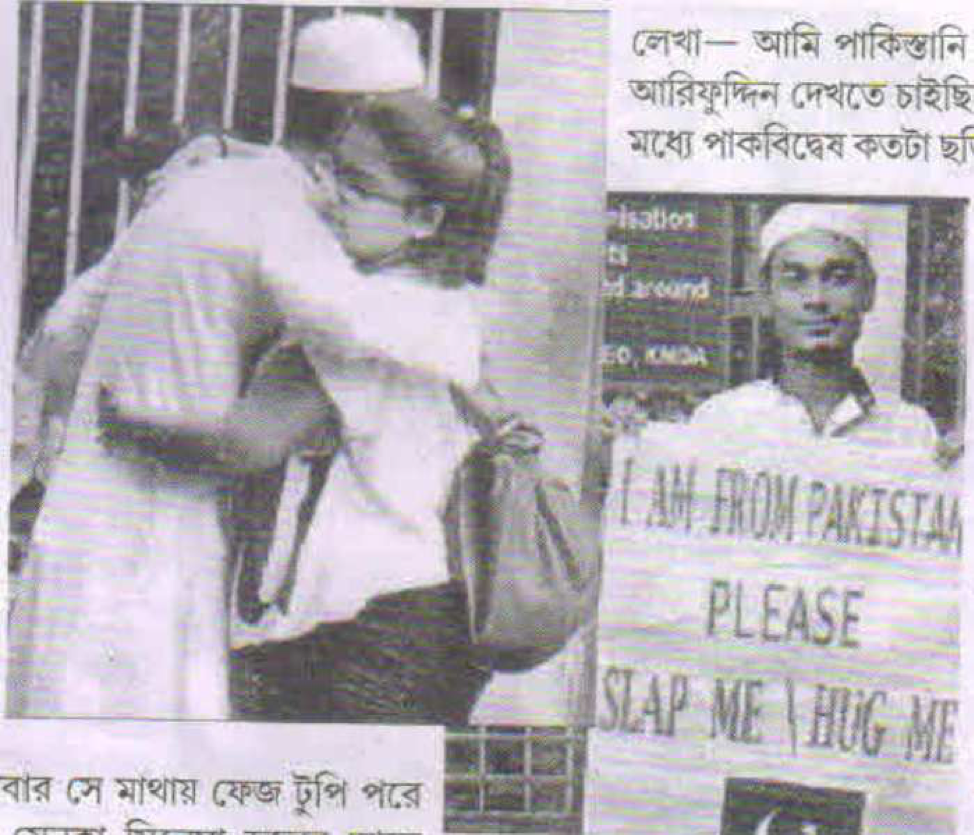 Scan from the Bengali weekly Janaswartha Barta, published 24 August 2019, showing Arifuddin with his placard and being hugged by a passerby.

The following report appeared in the Bengali weekly Janaswartha Barta (Pubic Interest Information) published 24 August 2019, with the headline “Pakistani! This is Kolkatta, this is Bengal”.

After abrogating Article 370 in Kashmir the Government of India, having promulgated an undeclared Emergency, is throwing any protesting face into prison. Even children are put in jail after arrest. An anti-Pakistan hysteria has been whipped across the country. It is at such a time that this young man undertook this exercise.

Arifuddin Molla is a BA First Year Student at Bhangar Mahavidyalaya in South 24 Parganas district of West Bengal. After the declaration of abrogation of Article 370 he stood at the entrance of Dhakuria Lake near Menaka Cinema in Kolkatta’s Southern Avenue. He had a placard in his hand wherein it was written, ‘I am a Pakistani. Either slap me or embrace me.’

Arifuddin wanted to see how much anti-Pakistan poison had been spread among the people of Kolkafta following the decision of the Centre. To clearly spell out, the objective was to comprehend the extent of change, iftny, brought about in the minds of the people of Kolkata with regard to Pakistan after the removal of Article 370 from the Indian Constitution.

Arifuddin stood there for eight hours. What a surprise! Not one person came forward in these eight hours to slap him on his face. Those who came up, men and women, they all embraced him. According to Arifuddin, initially most of the curious people were hesitant to come near him. “Then some came forward and embraced me. Some of them enquired: where are you from? I said: ‘From Lahore.’ Some asked more questions and wanted to sincerely help. Then when I told them that my home is in Kolkatta and this is my objective, they praised me.”