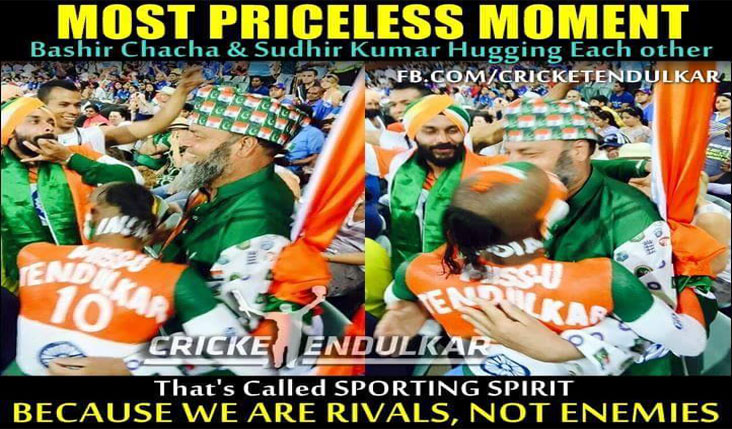 An Indian wonders who his enemy is across the border. Is it everything and everyone associated with Pakistan, security forces or something more subtle?
By Samir Gupta

It is twilight on a Wednesday evening and I hear loud chants coming from the public park opposite my house — “Bharat Mata ki Jai” (long live Mother India). It’s a group of teenagers from relatively poor families in a training session run by a nationalist group. The electoral win for a “Hindutva” government at the centre in India has made patriotism fashionable as India moves decidedly in a majoritarian direction. Slowly but surely, India is following in the footsteps of its western neighbour and estranged sibling, Pakistan.

The National pledge introduced in schools on 26 January 1965 was originally reserved for special occasions like Independence Day and Republic Day. I had even forgotten its text until I attended a school assembly recently and learnt that it is now recited every day there. The national pledge ends: “To my country and my people, I pledge my devotion. In their well-being and prosperity alone lies my happiness”. Stirring words indeed, but if you look closely, therein lie the seeds of competitive nationalism.

The media reinforce the nationalistic conditioning imparted by our schools, as media outlets sensationalise every incident related to Pakistan to sell their reports and grab the attention of the viewers and readers. When Lata Mangeshkar sings “Aye mere watan kay logon, jara aankh main bhar lo paanee, jo shaheed huway hain unkee jara yaad karo qurbanee. Jai Hind Kee Sena”, it arouses an emotional reaction that makes me want to stand up and fight the enemy.

But who is the enemy? Is it the nation of Pakistan? What/who is Pakistan anyway? The landmass demarcated by cartographers? The people who live there, or both? Surely the forests, the animals and the rivers can’t be my enemy. It is perhaps the people.

Which people though? Can’t be my friends who are so full of love for me. Must be the bloodthirsty loonies who roam the streets of Lahore, Islamabad, Karachi and Peshawar. The same people who are themselves being targeted by terrorists and criminals every day? Who welcomed Indians with so much love during the 2003 cricket match series? The Pakistan Army Chief, Gen Raheel Sharif and his predecessor, Gen Kayani are both talking about terrorist groups being the enemies of Pakistan.

One of my dear friends Fatima Harris is from India, married into a military family in Pakistan. She is an active member of the Aman ki Asha Facebook group, where I first came across her. She and her Pakistani family do not seem like my enemy.

The most interesting Pakistani friend I have is a Karachi based businessman called Tariq Jamil Khan, whom I ‘met’ via the Aman ki Asha Facebook group. A fiercely nationalistic Pakistani, he loses no opportunity to criticise India. His Facebook wall is full of provocative material that has some of my Indian friends seething with anger. Yet, over the last eighteen months, over Facebook posts, comments and chats and infrequent phone calls, we have the developed the most wonderful relationship you can have as a human being with someone you have never met.

Every time I interact with Tariq bhai, I feel an undefinable yet very strong connection with him that you can only have with a family member. The quintessential watanparast who is equally critical of Pakistan’s descent from its Jinnah-ite beginning, Tariq bhai is definitely not my enemy.

Maybe the common people are not the enemies. Perhaps it is the security agencies, the militia, the journalists, the talk show hosts and the products of the madrassas who are brainwashed into so-called ‘Jihad’. I am told that Pakistan is suffering badly from the disease of ultra-nationalism that India is catching fast on.

India’s national shame is the 1962 war with China that we lost badly by all accounts, imprinting China as the enemy in our minds while Pakistan still suffers from the 1971 nightmare. In an effort to protect itself from a similar national catastrophe, Pakistan has locked itself into a lonely corner

Aha! So it is ultra-nationalism that is the disease. Jingoism or ultra-nationalism is a self-perpetuating phenomenon that has people draw up walls of fear and hatred against those that the national narrative terms as our enemies. It is what gets fully grown men hyperventilating and frothing at the mouth with rage at the slightest provocation. It is what causes them to behead enemy soldiers, kill those across the border as revenge for the last cycle of violence, to viciously attack anyone who dares to stand up against unfair and inaccurate characterisations of those across the border.

It is what caused many in India to vilify the recent movie PK for showing an Indian woman falling for a Pakistani man. It is what causes many in Pakistan to lap up the poison spouted by television hosts like Amir Liaquat or Mubasher Luqman and many in India to so the same when leaders of Shiv Sena, VHP and Bajrang Dal spew poison in India. It is what causes raucous celebrations and despair when a cricket match between the two countries is won or lost. As someone said once, “India-Pakistan cricket is war without the military weapon”.

“Patriotism cannot be our final spiritual shelter; my refuge is humanity. I will not buy glass for the price of diamonds, and I will never allow patriotism to triumph over humanity as long as I live,” said Rabindranath Tagore, British India’s first Nobel prize winner.

As I turn to the Aman ki Asha Facebook group where I am a moderator, I realise the need to do what I can as an individual. I am strengthened by being part of a larger group of volunteers striving to tear down these walls of bigotry and counter the hatemongers on both sides. After all, we can only control our own actions, as the Bhagwat Gita famously teaches us.

The author is an IT professional and peace activist based in Ghaziabad, India. Email: [email protected]