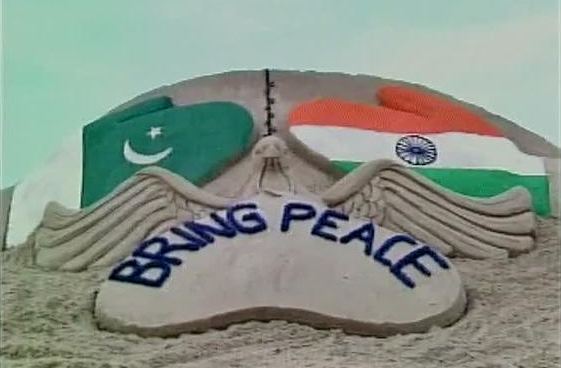 Sand artist Sudarsan Pattnaik's 2015 sculpture after the cancellation of the National Security Advisor talks between India and Pakistan. Who benefits from the ongoing tensions?

The Pakistan India Peoples’ Forum for Peace & Democracy (PIPFPD) has issued a statement about the escalating tensions between the two countries, urging them to exercise restraint. Text below.

Joint Statement by the National Committees PIPFPD of India and Pakistan

We, the members of Pakistan India Peoples’ Forum for Peace & Democracy (PIPFPD), from India and Pakistan, note with seriousness and strongly condemn the Indian air strikes and bombing in settled districts of Pakistan beyond the LoC. We demand both governments of Indian & Pakistan to show restraint and avoid any war like situation. We further demand immediate measures from both sides to de-escalate the situation and de-militarize borders by withdrawing troops to the peace time level.

PIPFPD, from India and Pakistan also unequivocally condemn the massacre of more than 45 CRPF personnel, at Pulwama, Jammu & Kashmir. We are also appalled at the large-scale killings of the police, army personnel, civilians and members of non-state armed groups, in diverse instances that followed Pulwama killings. We are shocked and pained at the number of human lives that is lost to guns, IEDs, missiles, bombs, pellet guns, stones, etc. in the Kashmir valley—especially in the increased instances over the last few years, since 2016.

Members of PIPFPD, from both countries, are deeply concerned about the situation arising because of the escalation of violence. Forum takes serious note of the high emotional outpouring and war mongering on both sides further giving rise to fundamentalists and extremists elements. It is perturbed about the increasing incidents of violence and vindictive action against Kashmiris in particular and Muslims in general by state and non-state actors in India. Ironically, despite a very delayed mention by the PM of India, senior members of the Indian government have not shown any meaningful or strong signs of restrain or resolve to discourage such violent elements and occurrences.

The Forum recognizes that failed policies of both India and Pakistan in addressing Kashmir issue is at the core of the problem. It has led to militarized means being prioritized over political dialogue and resolution. This has led to continuous loss of lives and has created war like situation in both civilians’ areas as well as border areas. A large number of lives have already been lost to this. PIPFPD believes in political resolution through dialogue and demands the governments of India and Pakistan to initiate meaningful dialogue involving Kashmiri leadership from both sides, addressing the issue bilaterally. The Forum believes that Kashmir is not a territorial dispute between two states. India and Pakistan must recognise Kashmiri people’s aspirations and must allow Kashmiri people belonging to all ethnic and religious communities and regions to participate in a dialogue to find an honorable and a dignified solution. Till that dialogue happens, a ceasefire based peace process must be initiated to prevent future loss of lives. For this, it is imperative that Kashmir on both sides shall be demilitarised, providing opportunity to Kashmiris from both sides of the border to meet freely and start their life free of fear and subjugation.

The Forum demands government of Pakistan to move beyond rhetoric of anti-extremism narrative to meaningful and substantive actions against all proscribed groups, terrorist organizations and their handlers. Ironically while those organizations have been taking responsibilities of such acts of terror, including Pulwama suicide attack, Pakistan government has shown no will to take necessary actions against those forces operating from its soil. The members of PIPFPD demand that all genuine concerns raised by government of India must be taken seriously and investigated at the highest levels. This is the time that both states must move beyond rhetoric and show clear and unfettered resolve against extremism be it the Islamic armed outfits or the Hindutva ones.

It in this backdrop and unfortunate reality that PIPFPD announces the postponement of 9th Joint Convention that was to be held from 15-17th March 2019 in Lahore, Pakistan. We believe holding of this convention is not possible in the current circumstances, where peace activists are threatened and space for people to people dialogue is highly squeezed. Members of PIPFPD are determined to hold the convention in coming months.

I. A. Rehman​​
Chairperson, PIPFPD Pakistan

Dear leaders, please come up with a solution beyond playing war-war India, Pakistan leadership on trial