Peace doves instead of falcon 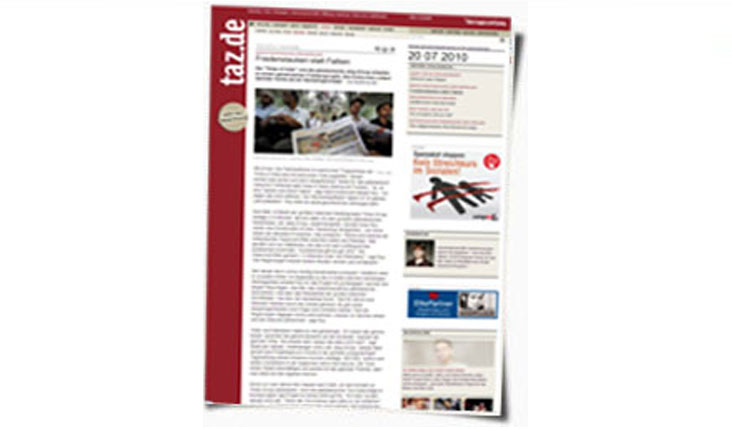 Taz.de – The Daily Newspaper of Germany – Frankfurt
The Times of India and Pakistan Jang Group are working on a joint peace project. The competition suspects behind nothing but a marketing concept. FLOWER OF GEORG

DELHI | taz The elevator doors in the marble staircase of the Times of India are sealed with printed film. To promote a green and an orange dove for the Pakistani-Iranian peace project Aman ki Asha (desire peace). “Yes, we are not pigeons and hawks,” says news chief Ranjan Roy. “We do not say this defensively. The elevator stickers we have posters all over the country.” Roy leads an extraordinary newspaper project.

His paper, owned by the largest Indian media group Times Group, circulation 4.5 million, has partnered with for the largest Pakistani media, the Jang Group. Just have Roy back to finish a special page with the pigeon logo – as always, next to the current production. The schlaucht. The theme this time is the draconian visa rules between India and Pakistan. You are granted visas only cities, and only after extensive police checks. Tourist visas do not exist. “The scourge visa requirements 1.3 billion Indians and Pakistanis,” says Roy. “Governments must finally be flexible and negotiate.”

Since January, he has produced for thirty special pages. Content, it is for each item. Unlike the usual Indian small-scale newspaper pages Roy works for the project with spacious layout and long features: sometimes on the Pakistani indienfreundliche auteur cinema, sometimes on the Pakistan Picture of the great Indian writer, now on the trade barriers. “Since 60 years, millions of families separated by the border. It does not even travel opportunities are also flights direct trade. Because the government do about it nothing that we have to soften the signs and discourses” says Roy.

“Indians and Pakistanis have so much in common. We eat the same food, speak the same language as the North Indians, making the same jokes. But most do not know everything,” said Salman Hassan, chief manager (CEO) of the Jang Group. Hassan can present a project site per week, the biggest urdusprachigen newspaper his group printed in (circulation: 800,000) also includes two pages a week in the British News International. Texts of both sides employ the respectively with the same issues, but it remains in its own authors .

Two years ago, Hassan went to Delhi to establish contact with the Times Group. But the Pakistani terrorist attacks in Mumbai, the project put on ice in the fall of 2008. 163 Indians were killed then. “Without the terrorism, everything would be so much easier,” says Roy. But the Times Group is also India’s nationalist television channel Times Now. There, every day of the terrorist state of Pakistan will be submitted and then send the hawks and the doves taunt.

Hassan also had to overcome resistance. He rattled off ministries, political parties and the military. He did not want to be “India friend” and bogeyman. “There were many reservations,” he says, over Kashmir, due to disputes over water from the Himalayas. As a “traitor” he was abused by some has been. But Hassan also discovered a new consensus of the Pakistani elites all know that without a better relationship with India is nothing more, especially in the economy. The less wondered Hassan, as in May the first major Indo-Pakistani Unternehmerkonferzenz in the newspaper project took place – a huge success. “The entrepreneurs access to the open policy. This has crackled right,” says Roy also.

The competition sees the project less idealistic. “The Times Group has perfect Marketing: You will send Humala TV news, making peace campaigns in the newspaper. This makes everyone in the customer,” says the head of the political editor of another major newspaper in Delhi, who wishes to remain anonymous. outside the media also encourages the criticism: “I sought help for a student exchange with Pakistan. But in the Times of India interested in only the marketing experts for the project,” says Shankar Musafir from the private school group Educom.

How long should run the peace project is still open. “Perhaps more year,” says Roy. Hassan wants to grow a longer breath, “We and grow. We are creating the greatest peace project of the global media industry.”

The more they talk, the less they'll bite Bordercrossing