“Peace-ing it together”: Across the Line – a book or a movement to heal? 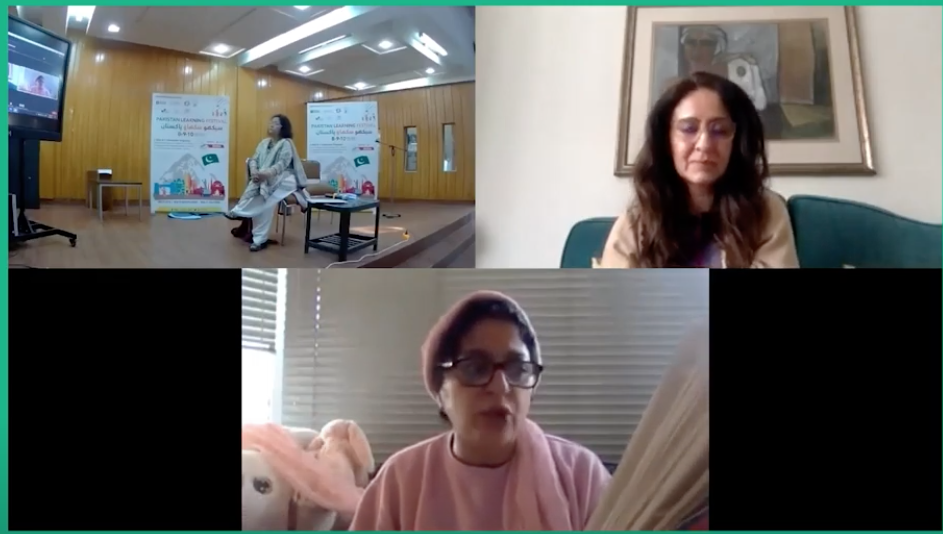 A recent book launch encapsulated all my passions as the founder of the Children’s Literature Festival, which aims to create spaces of learning, feeling and healing in Pakistan and beyond.

We want storytelling sessions to spark curiosity for relationships across species, heritage, environment. We want our events to seamlessly generate compassion and love of reading, bookmaking, theatre and music.

Nayanika Mahtani’s Across the Line (Penguin Random House, India) did all that and more, at its launch at the recently held three-day Pakistan Learning Festival, an initiative of the Children’s Literature Festival.

Our first virtual CLF was our 71st, a three-day event in August 2020. Its success gave us courage to keep going. In January 2021 as school reopening dates were announced, we designed our 72nd CLF as a hybrid one. It had to be multilingual, multicultural and multi-site simultaneously in three locations — two in Lahore and one in Karachi — over three days (Feb. 8-10) to accommodate multiple sessions with choices for all age groups.

Being hybrid would mean some students maintaining physical distancing in person and many more virtually. Across the Line seemed perfect to include at a book launch segment at the PLF with many genres of ‘learning’ as a centerpiece.

The “healing bridge” who put us in touch with the author was Chintan Girish Modi, our malang interlocutor in Mumbai. It has turned out to be a precious connection.

An investment banker turned author of children’s literature, Nayanika Mahtani is an author living in London but deeply rooted in Rawalpindi. Her novel Across the Line is a concurrent narrative across Rawalpindi, Delhi and London and three generations — children, parents and most poignantly the separated grandparents.

I also reached out to my amazing actor and activist niece Nadia Jamil, a CLF Goodwill Ambassador, to join me in conversation with Nayanika at the event.

“Planting literature in the lives of children is like planting trees”, says Nadia, currently healing from cancer in Cambridge, U.K. “It will give them the shade of a story, the oxygen of creativity, the fruit of knowledge, and the companionship of a friend”.

When the book reached me, I read it in one go, unable to put it down, weeping, laughing unashamedly in public and/or private spaces.

The story hinges around an art show in London. A painting of children playing pitthoo in a Rawalpindi courtyard provides clues to the elderly siblings about their seven-decades of separation. It also provides an opportunity for closure. In their grandchildren Inaya and Jai, Tarlok and Toshi find their own free-spirited childhoods backing their passions for becoming a cricketer and chef respectively despite disapproving parents.

The book launch over 60 minutes was extraordinary beyond all expectations. Like me, Nadia had read the book with tears and laughter. She brilliantly read out passages bringing the characters to life.

Nayanika’s presentation online at the event said it all. The book is about her childhood too, her brave grandparents’ generation, their languages, spaces and friends, then and now. It was a profoundly personal journey that had to be shared across all audiences without boundaries and across the line!

The session had a multiplier effect. Within days, Nadia and Nayanika had set up an Instagram account as well as a Facebook group called “Peace-ing it together”. They are planning to develop an audio book and planning for a tele-film.

Good deeds by the bhalay log of her Suri family continue.

In the 1850s, Nayanika’s ancestors had built a massive temple complex in Rawalpindi, Kalyan Das Temple, its hundred rooms providing hospitality to pilgrims enroute to Amarnath.

After her family left following the 1947 independence and partition of India, the Pakistan government established a secondary school for visually impaired children in part of this temple complex.

Nayanika’s open heartedness and love for the people of the area is evident in her response: She believes her late grandparents would approve of the good use their building is being put to – what could be better than housing the education of children.

Baela Raza Jamil is CEO of Idara-e-Taleem-o-Aagahi and founder of the Children’s and Teachers’ Literature Festivals in Pakistan. She has worked with provincial and federal governments as a technical advisor in education sector reforms.