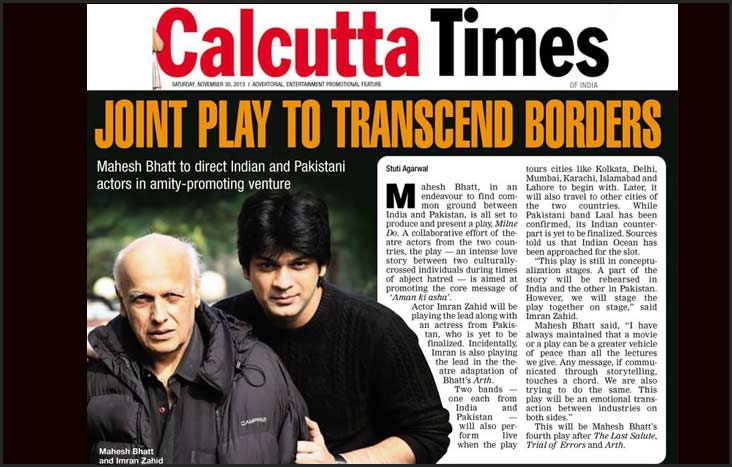 A behind-the-scenes look at what is driving a veteran film producer and peace activist’s fourth stage production, coming up

It was Google’s “Reunion” ad released on the web that pushed Delhi-based actor Imran Zahid to move on an idea that he has been thinking about for some time, creating waves in the media.

Last week Imran messaged me, asking for story ideas for a stage play “to promote Aman ki asha and the concept of ‘Milne do’ (let them meet) to be staged in various cities of India and Pakistan in association with Mahesh Bhatt Saab”.

The Reunion ad taps into a growing groundswell for peace between the people of India and Pakistan, but their desire to meet is stonewalled by the restrictive visa rules. Imran plans to incorporate these points into the stage play “in order to make it meaningful”.

I’ve never met Imran but we’ve been in touch since early 2011, when he was involved in our campaign to free the Pakistani prisoner Dr Khalil Chishty, falsely convicted of murder in India.

A protege of Mahesh Bhatt, Imran worked tirelessly behind the scenes, pushing contacts in the media to take up the story, contributing to public awareness about the case (Dr Chishty was acquitted in December 2102).

Having grown up in Bokaro, Jharkand (Bihar), where his parents still live, Imran began acting while studying at Delhi University. His initial training by Arvind Gaur, who runs the theatre group Asmita focusing on innovative, socially and politically relevant theatre, has stood him in good stead.

Zahid has received plaudits for his leading roles in Bhatt’s stage productions – The Last Salute, about the Iraqi who hurled a shoe at American President George W. Bush, and The Trial of Errors, exposing atrocities against religious minorities in India. Bhatt’s third play is one that Imran urged him to do – an adaptation of Bhatt’s 1982 Arth, to be staged in Feb-March 2014.

With Mahesh Bhatt involved, the proposed play ‘Milne Do’, a collaborative effort of actors from India and Pakistan, holds promise. Bhatt has the rare ability to incorporate socially relevant, controversial themes and issues without compromising on artistic excellence. (‘Milne Do’ was the title of my short 2006 documentary about Kashmiris separated across the divide. The Aman ki Asha campaign against visa restrictions between India and Pakistan is also called Milne Do.)

The play will feature live music from both countries. Imran spoke to the Pakistani band Laal, visiting India last week. They promptly agreed to be on board.

It’s an ambitious plan given the visa regime and ongoing tensions: to conduct rehearsals in India and Pakistan, and stage the play in Calcutta, Delhi, Mumbai, Karachi, Islamabad and Lahore, before taking it to other cities.

“For me, Aman ki Asha is not just a few pictures and articles in newspapers but respecting, communicating with each other the way we are,” says Imran Zahid. “I think that represents how educated we are, how liberal we are, how we want to work together and create peace and harmony.”