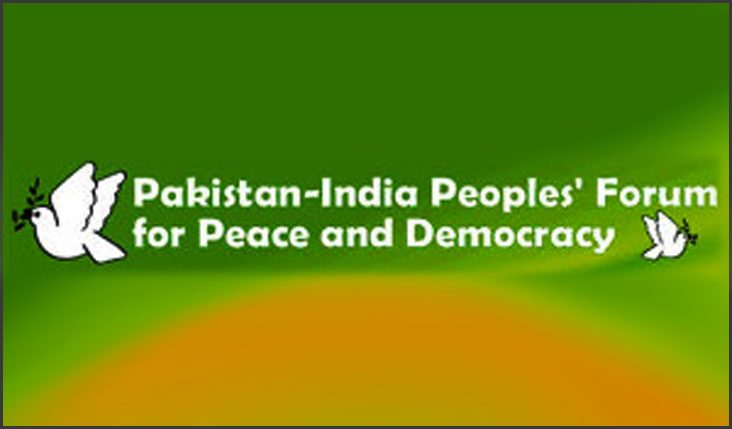 “In the backdrop of so many failed or aborted attempts to resume meaningful dialogue between the governments of Pakistan and India, the need for stepping up the initiatives at people-to-people level assumes greater importance,” say Asad Iqbal Butt, Convener, PIPFPD Sindh and B. M. Kutty, Secretary, PPC in a background note providing context to the event.

The common people of Pakistan and India ardently desire lasting peace and friendship between the two countries, say the organisers, recalling the millions of school children across of India who observed a minute’s silence, many with tears in their eyes, to express their sorrow over the massacre of their unfortunate counterparts in Pakistan’s city of Peshawar by religious terrorists.

The organisers point to “the dire need to harness all our energies and resources to fight problems of poverty and under-development” as well as “the combined menace of religious and ethnic intolerance, violence and terrorism, which is fast emerging as the most serious threat to all the values and institutions symbolizing modern civilization.”

This dialogue aims to produce concrete proposals to promote peace and interfaith harmony in the subcontinent, “including uninterrupted people-to-people interaction between our countries and a common strategy to fight against the forces of religious intolerance and violence, which are pre-requisites for the economic development of our countries and the progress and prosperity of our peoples.”

Dr. Syed Mazher Hussain has been involved in several people’s initiatives for the promotion of peace and friendship between India and Pakistan and interfaith harmony in India for over a quarter century. He is the Executive Director of Confederation of Voluntary Associations (COVA), a 20-year old national network of voluntary organizations working for communal harmony in India and peace in South Asia.

Engaged in grassroots initiatives as well as international policy interventions, COVA has trained 15,000 children, youth and women in the city of Hyderabad (India) for responsible citizenship and effective social activism, and collaborates with over 1000 organisations at the national level to promote communal harmony in India and secure governance from grassroots. COVA advocates with the state and national governments for pro-poor and sustainable policies, networks with organizations across South Asia to facilitate increased people to people contacts; and engages with multilateral bodies like the United Nations Organization, G20, OIC and others for structural transformations to make society more equitable, sustainable, just and peaceful.

Dr. Mazher Hussain has been actively associated with the Pakistan India People’s Forum for Peace and Democracy (PIPFPD) since its inception 21 years ago. He has visited Pakistan several times.

A senior journalist and activist with over 25 years of experience, based in Mumbai, Mr Desai is involved in multiple activities and remains in the forefront of advocating problems faced by common people. He has worked with newspapers like Gujarat Samachar, Janmabhoomi and Mid-Day and currently writes columns in various papers and periodicals on international affairs in general and India-Pakistan and other SAARC countries in particular.

As chairperson of Bombay Union of Journalists (BUJ) for four years, he has fought for freedom of expression and speech including the historic rally of journalists outside Sena Bhavan, Dadar and a dharna of top editors in Shivaji Park to protest against Shiv Sena’s attacks on the newspapers.

After Lok Sabha elections in 2009, he made a detailed presentation before the committee of Press Council of India on Paid News, due to which the credibility of media is at stake. He was appointed as a member of Maharashtra Media Certification & Monitoring Committee (MCMC) formed by Election Commission of India during Lok Sabha and State Assembly elections last year. The role of the MCMC was to identify Paid News and take appropriate action against the erring candidates. Mr Desai is also engaged in promoting friendly India-Pakistan relations and has long worked on getting detained Indian and Pakistani fishermen released from each other’s prisons.

Born in July 1937 at Warangal, Andhra Pradesh, Nanak Singh Nishter uses Nishter as his “takhallus” – pen name. He is fourth generation descendent of one of the 12 Risaldars of Sikh Contingent of 1200 personnel sent by Maharaja Ranjit Singh around 1830 as Peace Corps to help the Nizam of Hyderabad. His father Risaldar Gurdat Singh hereditarily continued the position until it was disbanded in 1951 after India’s annexation of Hyderabad.

He is a social scientist, public activist, interfaith promoter, poet, orator and writer on religious and social issues. He has presented papers at national and international seminars, in India and abroad, including universities of Bangladesh, U.K. and U.S.A. He has authored nine books and several pocket size booklets for free distribution and about 250 articles, in Urdu, Hindi, Punjabi and English, published by print and electronic media around the world. His works are translated in Gujrati, Telugu and Marathi. He is associated with several literary and social service groups holding key positions at local, national and international levels.

Mufti Saheb is a dynamic scholar, well-grounded speaker, prolific author and a strong advocate of interfaith dialogue. He graduated from the well-known Islamic seminary Darul Uloom Deoband, has done a specialization course on Islamic law and jurisprudence under the supervision of his father Maulana Khalid Saifullah Rahmani at Al Mahad ul Aali Al Islami. What sets him apart is his dynamic educational background, together with his achievements in Islamic Studies. He did his Masters from Osmania University and PG diploma in Mass Communication from Hyderabad Central University.

He has conducted almost half dozen international and national seminars in India and abroad.

He has been invited to many countries including Turkey, South Africa, Qatar, Saudi Arabia, and USA to speak at various conferences. He has successfully hosted and chaired many TV Programmes on Shariah and Islamic civilization. He is also a peace activist who established the Centre for Peace and True Message to promote communal harmony and interfaith dialogue in society, and serves as General Secretary of the Centre.

His books, published widely in India and Pakistan, are well received across the world. He is a scholar of Islamic law, in charge of Islamization of knowledge project at MS Research Unit, and editor of the scholarly journal Hadith. He is highly regarded among both the intellectuals and common people. His competency lies in dealing emerging issues from Islamic perspective in a pragmatic fashion and working with youngsters and inter-religious leaders.

Hailing from a notable family, he is a grandson of Qazi Mujahidul Islam Qasmi, former president of All India Muslim Personal Law Board and founder of Islamic Fiqh Academy (India).