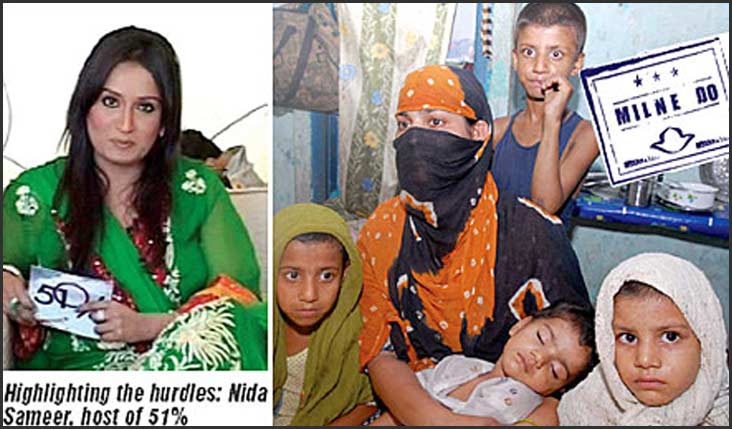 Tensions between Pakistan and India have led to tough security measures and visa restrictions. It’s not just those with relatives across the border, or tourists, students, professionals and journalists who are affected. Particularly hard hit are those who have married across the border.

Visa problems result in many people opting not to marry someone from across the border. Those who do, live in perpetual fear of relations nose-diving between the two countries. As a result, they opt to live together in a third country after marriage, either retaining their respective nationalities, or obtaining the nationality of the third country.

It is usually the woman who changes her nationality if she marries a foreigner and goes to live in his country. In the case of India and Pakistan, women have to apply for long term visas, or keep returning to their country to get a visa renewal. In many cases, particularly in poor or illiterate families, not knowing about the legalities and formalities involved can lead to the woman being deported, or threatened with being deported because her visa has expired, as in the recent case of Rehana Perveen from Pakistan, married to a man in UP, India.

After a decade of marriage, she was threatened with deportation – and leaving her Indian born children and husband behind – because she had never applied for a long-term visa (LTV), and her original visa and even her passport had expired.

“Her failure to apply for nationality was an oversight,” reported The Times of India. “After 1947, families split by the Partition maintained relations across borders. Both cross-border holidays and match-making were common. ‘We used to come here every year as children’ says Perveen. Saeed was her cousin and the residence in Kairana, a second home. The match was arranged, the Saeed family travelled to Pakistan in 1999 and the marriage was solemnised there. As far as the family was concerned, all ‘formalities’ as they call it, were over then. They didn’t bother with further paperwork; they simply didn’t know any better” (‘Waiting for a visa: Rehana Perveen’s dilemma’, by Shreya Roy Chowdhury, 28 May 2010).

The district authorities in Muzaffarnagar, UP, where she lived, initially ordered her to leave the country, but later, they made a plea to the government to allow her to stay on humanitarian grounds. Menwhile, her LTV finally arrived, and she was able to breathe a sigh of relief and get her children re-admitted in school.

This is not an isolated story. Rehana knows women who have had to wait 12 years for their LTVs. Some years ago, a nonagenarian woman, Gulab Fatima, found herself facing deportation after decades in India. She was finally allowed to stay on, on humanitarian grounds.

Recently, four cross-border couples participated in 51 Per Cent, a Geo TV show hosted by Nida Sameer. They talked about the hurdles they faced when they married people living across the border in India. Interestingly, three of the four couples got married in the UAE so that their families could attend the wedding – given the visa problems, those from across the border would not have been able to attend if the event was held in India or Pakistan. The fourth couple managed to get visas for the bride’s family in India to attend the wedding in Pakistan.

All of them spoke of the visas problems they faced. All longed for the India-Pakistan border to become softer to promote not only marriage but also trade and student exchange which they felt would help both countries.

They agreed that despite all the myths that people of both countries have regarding their neighbour, they have more in common than not: the two countries, their cultures and traditions and people are very similar, and at times it is difficult to tell the difference between them.

“Culture and religion are two different things,” said Haider from Lucknow, India, married to Amra from Pakistan. They live in the UAE.”

People belonging to the same culture have same traditions and are quite comfortable with each other whether they live in Pakistan or India. When I first started coming to Pakistan I often forgot where I was until I saw billboards in Urdu. Karachi is just like any other city in India. One of my friends, Sanjay used to visit Pakistan some 25 years ago, when the situation between the two countries was better, and he also felt quite at home in Karachi. He would always say that he couldn’t tell whether he was in Pakistani city or an Indian.”

“Until people travel to each other’s countries,” he said, “they will always harbour fears and doubts about the people on ‘the other side.”

He said his Amra was surprised when she first came to India to hear the bells chiming in temples, but she was even more surprised to hear the azaan in India. He continued, “Until more and more people from both countries don’t marry; pressure will not build on the visa-issuing authorities.”

He congratulated The Jang Group and Geo, and The Times of India for launching Aman ki Asha, calling it a “a good endeavour”. “There is no point in fighting,” he added. “Things should be resolved, with softer borders.”

Amra said that she loved her husband and in-laws but she also loved Pakistan. “I would not like to see a city attacked in India where my relatives live, but then if Pakistan was under attack I would be worried as well. It is true that I would feel more if Pakistan was under attack. But when you see a dead body you feel sympathy, you don’t ask which country that person belonged to, because you feel for humanity in general.” She said that she loved going to India, and never faced visa problems. “In fact, I am given more love and respect as a Pakistani when I am in India.”

Amal from Pakistan and her Indian husband Mudassir – both also living in the UAE — said they never felt alienated. “I never ever feel that I am married into an Indian family,” said Amal, whose in-laws speak beautiful flowing Urdu. Mudassir said that he always had more Pakistani friends than Indian, and that most people thought he was a Pakistani.

Mudassir said that Pakistanis and Indians living abroad are all termed as “desis”, there is “no differentiation and it is difficult for other people to tell us apart. Except for cricket matches, when we each take the side of our team, there is no telling us apart.”

Indian national Nadira married her Pakistani husband Ali in Hyderabad, Pakistan. They too live in UAE . They managed to get visas for her entire family to visit Pakistan for the wedding.

Pakistani Nadia married to Indian Faiz has a different story. Living in the UAE, she had applied for an Indian visa which did not even arrive six months later. She approached the Indian embassy and demanded an explanation. “I said, is this the way you treat Pakistanis”. She is still waiting for her visa to visit India.

All these couples agreed that borders cannot stop love and affection from flowing across, and said that if more people married across the border, it would help increase understanding between the two countries. They said that the media, governments as well as Bollywood can play an important role in changing the mindset of people.

Although Pakistan and India are two separate nations today with separate identities, they were carved out of the same whole. Despite all the differences that have evolved over the years, their people have a lot in common. Thousands have families across the border, and would find it difficult to severe their ties. Allowing people to people contact, an increase in trade and more joint ventures, and yes, more cross-border marriages would go a long way to creating a feeling of goodwill in this region. This could contribute to resolving the more serious issues like Kashmir.

Of course there is a need to improve security measures, but at the same time it is imperative that the hurdles in procuring visas be removed. This will facilitate both countries in many ways, especially in decreasing the tension in the region and removing misconceptions harboured on both sides of the border.