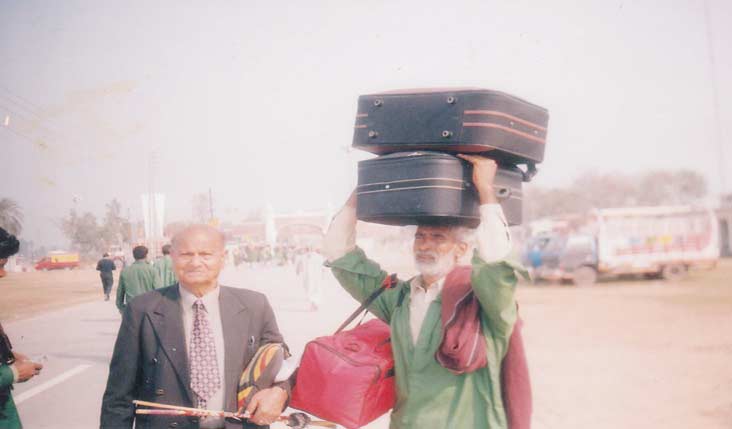 The writer in Rawalpindi

Some years ago, a cricket match between India and Pakistan provided me my first opportunity to visit my birthplace, Rawalpindi
By Yash Pal Sethi
Pakistan travels-1

Some years ago, a cricket match between India and Pakistan at Rawalpindi and Lahore provided me my first opportunity to visit Rawalpindi, my birthplace that I had left 59 years earlier. By then, my parents, grandparents and uncles had passed on, and I was the only male member in the family who had seen the upheavals of Partition. I had almost, but not quite, forgotten the place of my origin.

It was September 2006. My son Rakesh and I reached Wagah border early one morning. Checking on Indian side was stringent and lengthy. The rude and authoritative customs staff finally allowed us to cross the invisible border. The Pakistan checkpost staff was courteous and cooperative.

Our host, Bashir Ahmed, who had especially come from Rawalpindi, was anxiously waiting to welcome us. He drove us to a hotel to collect our tickets for the Lahore match before heading onto the highway towards Rawalpindi. It was dusk when we reached. After going to a hotel to collect tickets for the match the next day, we asked Ahmed to drop us to our hotel. He refused, insisting that we had to stay with him. He would not take no for an answer. His wife was eagerly waiting to welcome us in the hospitable Punjabi way.

A jovial, talkative lady, she was a retired Inspector of schools and treated us like close relatives. Her son and my daughter were immediate neighbours at Muscat and lived as one family. We discussed many things except religion and politics in a very close family atmosphere over a long-drawn out dinner.

The following morning after brunch our host dropped us to the cricket stadium. There was a great rush and no special entrance or sitting area for foreigners. Actually my mind revolts at the word ‘foreigner’ in this context. How can I be a foreigner to the place where I was born and spent my initial sixteen years maujj masti? Legally and technically I may belong to a ‘foreign’ country but my mind refuses to accept this. I did not need any interpreter to translate my language or my feelings to anyone I met in Pakistan, as they all belonged to the same culture to which I belong.

We found two seats amidst the enthusiastic crowd in the packed stadium. India won the toss and opted to field. Slogans like “Pakistan Zindabad”, “Hindustan Murdabad” began resounding in the stadium.

When Indian player Ifran Khan was in action we heard loud sarcastic remarks: “O nakli Pathan”. Amidst a “Hindustan Murdabad” slogan I smiled and casually mentioned to my neighbour that I am from Hindustan. He immediately reacted with: “Mafh karna janab, tussi tey sady mehman ho” (Forgive me, you are our guests), and got three bottles of Coca Cola, one for each of us.

Soon we noticed a change in the pattern of slogans in our section. We heard “Pakistan ki Jai, Pakistan Zindabad” but no more “Hindustan Murdabad”.

Our new friend was eager to get us something from each hawker who passed through. A bit disappointed to learn that we are vegetarian, he managed to find potato chips from somewhere. A florist by profession, he invited us to stay at his house and offered to pick up our luggage from our hotel. He only stopped insisting when we explained we were already staying with a friend. We never felt that we were in a “hostile” country.

At one point General Musharraf, then President of Pakistan, arrived at the stadium. This became known only due to the hectic movement of the police forces. By this time there were clear indications that Indian team would carry the day. We left 1.00 p.m to meet our host Ahmed who was waiting for us outside the stadium so we could fulfill our real mission – to see the place where I was born.

We went to Raja Bazaar, the biggest shopping centre of my time. On the way I refreshed my memory as we passed Rose Cinema, Subzi Mandi, Dana Mandi, Singh Sabh, Dingi Khui, and roads leading to Dehri Baba Sarab Dayal, Sardara da bagh and Quila. We parked and headed to Bazaar Sarafan, less than a mile away. As we walked, I told Ahmed the names of the roads we passed. The name of Bazaar Talwara, he told me, had been changed to Urdu Bazaar.

The bazaars were the same and so was the rush but the people were quite different. The bazaars and shops did not match my emotional frame. Rationally I knew that all those people had left when my-this land became non-India (Pakistan). By the time we reached my birthplace in Mohalla Shah Chan Chirag facing Bazaar Sarafan no inner urge was left.

The writer in Rawalpindi

Our house was bounded by three streets. The ground floor had been modified. A lane between the “Deodi” now linked it to the back street and four shops were constructed on either side under its roof.

When the resident-shopkeepers came to know that I was an original resident and that was my birthplace, they welcomed us warmly. They invited us into a shop, seated us comfortably, arranged refreshments and asked about our welfare.

They were happy to see us and excitedly told everyone who came by about us. They asked many questions about India’s political and economical conditions and told us about theirs, which they didn’t seem very happy with.

They took us to the back of our house from where new stairs led to the upper floors. The door of the stairs was locked. They anxiously offered to bring the keys to enable us to go up see the rooms on the upper floors where I was born. But by now, my emotions were numb and I had no urge to see anything.

This house had been good when I lived there with my father, mother, brothers and sisters. Now it was a lifeless structure of bricks and mud. We could see self-grown plants and trees inside and on the outer walls of many of the houses. I took a few photos. The back street looked deserted without my playmates. Even otherwise it seemed as if nobody lived there.

The writer is a retired banker born in Rawalpindi in 1931. He studied in Murree and Malakwal, and at DAV High School, Rawalpindi. He lives in Yamuna Nagar (Haryana), India. This account is adapted from his posts to the Aman ki Asha Facebook group.

A cross-border marriage, 25 years on Briefs