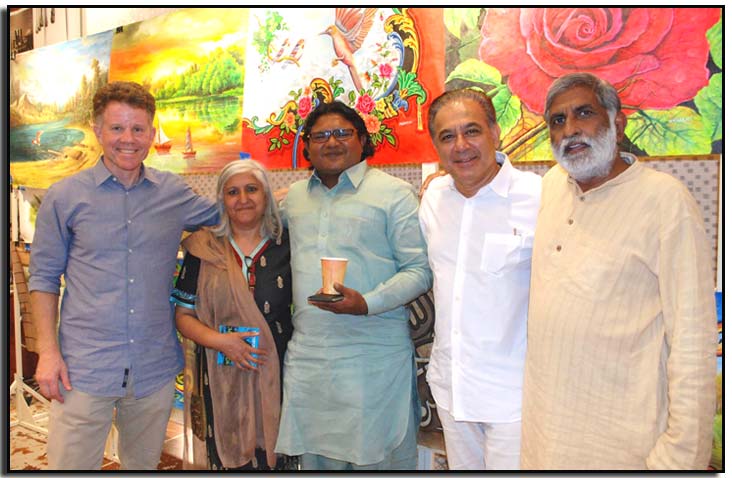 This year marks India’s 69th anniversary of independence from British rule. Pakistan celebrates the day on August 14, as it was on the night of August 14 that the Union Jack was taken down. For many years in our area, Boston, Indians and Pakistanis have gotten together to celebrate their Independence Day in an atmosphere of friendship and solidarity.

This August 14 we attended such a gathering organized by some friends. Haider Ali, a folk artist from Karachi, made a beautiful presentation about what is known as Truck Art now across the globe – called ‘phool patti’ locally. In Punjab and North West it is a custom to paint trucks and buses very elaborately. This custom seems to date back to Harappa and Indus Valley times. Some of the figurines and artifacts excavated from these sites show intricate decorations of carts and their wheels. Elaborate decorations on the camels and vehicles in trade caravans signaled their peaceful intent when going into hostile regions.

After the presentation and discussion, some young, talented musicians of Indian origin performed on sarangi, tabla, violin, dhol and oud. It was beautiful music and a beautiful ambience.

Haider Ali is a young and very passionate artist. He loves his art and has brought it to the different parts of the world. He has been to India several times as well and said that he felt home in India as well. His grandfather left India during partition from Jalandhar and moved to Karachi via Sahiwal.

The evening before the event, Haider Ali with some other friends dropped by our place. There were young musicians, a Punjabi poet from Lahore and a very promnent journalist from Karachi. We laughed so much together. Of course we talked about the absurdities of partition and Indo-Pakistan relations.

All evening we were laughing at these absurdities to overcome our pain of partition, which is deep and ever present. Haider Ali told us an anecdote. Once he was in Chandigarh, being driven in a car with UP plates that a friend in Delhi had arranged. The driver told him that if police stops us, please do not let them know that you are from Pakistan. Of course they were stopped, and the constable who stopped a car from UP was looking for an easy prey for some cash. Ignoring the nervous driver’s advice, Haider Ali greeted him in Punjabi and told that he had come across from Lahore. The constable very nicely said in Punjabi, you are our guest, please proceed on your way.

Another old friend joined us who was Haider Ali’s host. More laughter, more young musicians joined. We remembered a story that both Faiz Ahmed Faiz and Sardar Ali Jafari have related to us. Sardar Ali Jafari from India and Faiz Ahmad Faiz from Pakistan participated in an event in the erstwhile Soviet Union. It was right after the 1965 war between India and Pakistan. There was a lot of absurd propaganda on both sides.

At the event, the organisers felt there would be tension between the delegations of these two countries, so they seated the Indian delegation on one side of the hall, and the Pakistani delegation on the opposite side. As both delegations walked in and sat at their respective tables, there was pin drop silence. One could cut the tension with a knife.

Before anybody could say anything Faiz Sahib rose up and started walking towards the Indian side and Sardar Ali Jafari started walking to the other side. As they met in the middle and hugged each other warmly, the whole place broke out in applause.

I phoned a journalist friend in Punjab, India and asked him about reports of firing on the border. He replied that these firings are generally a cover for smugglers, drug and human traffickers to provide them protection. And as you also know both countries have a highly developed military industrial complex, so they keep tensions going. It is very lucrative business. The U.S. also does not want peaceful relations between the two countries, it has to sell weapons to both sides. So it suits all these players, neither peace nor war, keep up the tensions. War is the most lucrative industry as invasions of Libya, Afghanistan and Iraq have shown.

All people gathered for the India Pakistan joint Independence Day celebrations prayed for betterment and prosperity for people of both the countries and for travel restrictions to be lifted or eased. If that happens, maybe and just maybe friends and relatives in both countries can meet each other freely.

As the old saying goes, one lives in hope – aman ki asha.

Jaspal Singh is a Vedic and Punjab scholar and retired financial analyst based in Cambridge, MA. Email: [email protected]