Remember to make a wish at the bridge 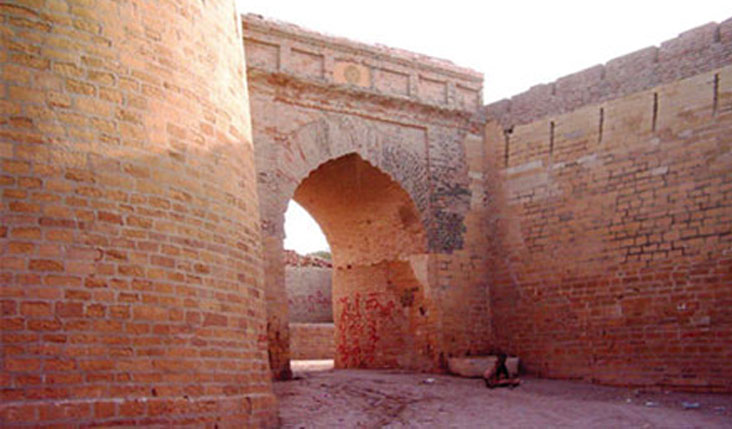 A daughter of Sindh living across the border shares memories of her childhood days in Jagir, Amarkot. This article is adapted from her personal note to friends after her recent visit
By Sarita Kumari Sodha

We stop at the centre of the bridge to throw a coin in the great Indus. This tradition is one that we carry from our childhood – my father would always stop and make us each throw a coin and wish, basically an age old custom asking the river for permission to cross. I always made a wish when crossing a bridge as my father said. I believed him… then and now….

Hyderabad is midway to Jagir (Amarkot) from Karachi, and it was with relief we would stop here for refreshments of sandwiches and soft drinks on our way to Jagir. On the way back to Karachi, there would be puri and alu ki sabji.

It used to take us eight or nine hours in the old days, but we never minded as at the end of the journey was Jagir… and Dada (grandmother) waiting for us with all kinds of goodies and two months of summer holidays stretching ahead of us. Despite the scorching heat and famous desert ‘lu’, the least of our concerns was turning brown as lobsters… Ahhh… childhood, its innocence and mercies….

We still head straight towards Dada’s room as we did all our lives, although Dada is no more… All of us still adhere to this habit…. As we do towards a small niche in a wall dedicated to my grandfather, Rana Arjun Singh. We never saw him, but his name and stories would pump red blood and fill our chests like breath of life.

A man of his word, at six feet four with almond eyes, he was known as the most handsome man in Sindh, observed Sir Pratap Singh, a regent of Jodhpur who visited Sindh in the 1930s. He died in his early thirties, in January 1947. His true desire was to contest the elections on the same soil where his ancestors had lived for a thousand years, from the Muslim League platform.

My grandmother Devi Kumari, of small build but of herculean stature, refused to leave the land of Sindh, where the Sodhas have been ruling in Amarkot since 1123 AD. Her brothers in Jaipur, where she was from, thought she and her three sons should migrate to India. None of them did. Instead she would ride a horse with a gun guarding this land of our forefathers.

Her influence has pervaded all of our lives. It’s her spirit that I invoke when life proves difficult. My elder uncle (late) Rana Chander Singh, a true son of the soil, earned a exemplary name for himself in the sub-continent, had a political career spanning half a century… A man of tremendous values and principals. I have come in contact with many men of outstanding intelligence and integrity and yet they fall short of his stature; none can hold a candle to his magnificent personality.

The famous Sindhi folk song ‘Mor thor tile rana’ was sung about my ancestor Rana Ratan who accepted the gallows in 1859, having opposed the British for the sake of his people. The ‘suli’ on which he was hanged is still there in Amarkot fort, as testimony to his heroic sacrifice.

Rana Jagir, with our rawla occupying half of the village, single storied, as is our Kul Devi, Deval Mata ji’s temple, is open to the sky… So many memories… I can talk about it all night, like the stories we heard in our childhood, sleeping under the canopy of stars, the night crisp as the cool breeze of the desert. During the day the temperature would rise like lava but the cool nights would make us forget the torturous heat of the day. It’s March now and the festival of Holi is over. When I close my eyes, I remember my father Thakur Balvir Singh, doing the dandhiya dance to the rhythm of the dhol at Holi. How magnificent he looked in the round Sodha ‘potheya’ (headgear) and the starched ‘tevta’… I remember him playing the ‘chang’, a small mouth organ played in the desert, which produced the sweetest music I have ever heard.

He passed away in 1991 at the age of 52. I am ever so thankful to him for bringing the magic in our lives and teaching us how to love and live. That is the legacy my brothers and I carry, a lesson well taught and well learned.

The green fields, the water canals, the rides on bullock carts with my village friends, the horse rides, the toys made from the river’s dark earth, dried and baked, the little doll weddings we would arrange, dolls made from chirmi, a red berry found in the desert. Life was so simple and beautiful… no electricity, no phones, no television. We would find our own entertainment. The elders too seemed dedicated to make us as unruly and wild as possible… nothing too much and nothing less…

I ate so much then, enough to last me a lifetime. I could eat three heavy meals and still be ready to have more… amazing. The purified fresh butter, literally bottles of milk – we didn’t know the concept of glasses -the fresh ‘khata’ (buttermilk). We could consume jugs. Youth and its blessings…

I miss all that now…and so much more, so much…

Old and young come to see ‘biaya’ an affectionate word derived from the Rajasthani word ‘baisa’ used for girls of noble birth… I am touched while being blessed with their simple way of touching my head with their loving hands roughened with age and sometimes harsh desert life… their innocent inquiries about my married life in India, their joys and sorrows… their gifts of paan, supari, oranges, and peppermint sweets… For me it’s like an ocean of emotion and feelings… My voice is often full and throat choked… My eyes brim up and tears fall unchecked… A tribute to the full life we were given without any thought and the material purposefulness that has invaded every sphere of life now.

As we drive back to Karachi on the Super Highway, on the last leg of our journey, I remember all this and my heart is overwhelmed with gratitude. I thank God for giving me the childhood I had, for my ancestors of this simple land of Sindh whose kindred spirit I carry within me, for my parents for being simple loving people who taught us what love and family means, for my three brothers who fill the vacuum my father left when he is no more… Their care and love still infuses the same spirit in me and fills my chest with breath of life….

I thank God for all this and much more. One can never disown the land of one’s birth. I have told my sons Shakti and Janmejay to scatter my ashes in the Indus and the dunes of Thar, as I would only be at peace if I return to Sindh. Maybe that sounds melodramatic but it’s the simple truth.

Sarita Kumari Sodha’s mother and brothers still live in Amarkot, the only Rajput state in Pakistan. Their ancestors gave refuge to the Mughal Emperor Humayun whose son Akbar was born there. Since her marriage in 1984, she has lived in Ghanerao and Jaipur, India, visiting Pakistan frequently. As a member of the South Asia Women’s Network (SWAN) and Vice President All India Rajput Women’s Association, she is looking forward to the Indo-Pak Business Meet in Lahore, May 7-8, 2012.