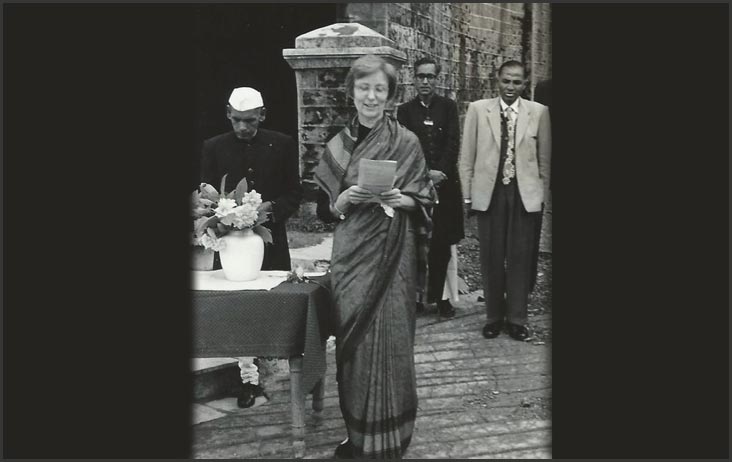 A ‘not really Indian’ remembers the extraordinary Barbara Alter, a true humanist who loved Urdu and lived most of her life in Mussoorie
By Siraj Khan

I turned back in surprise to see who had addressed me in Urdu and saw a frail white American lady on a wheel-chair in the corridor at the Wingate nursing home in Sudbury, Massachusetts (greater Boston area).

It was early August 2014. The American lady with her cropped white hair was clearly even older than my mother who was taking a stroll with the help of her walker, as I kept her company.

We all laughed. That was the start of my friendship with Barbara Alter, 93, who passed away just a few months later in November 2014.

In the time that I met and conversed with her, I learned that Barbara’s husband James (Jim) Alter was in fact born in Sialkot. Jim’s parents were American missionaries who had moved to the Punjab back in 1916 and decided to stay on in Pakistan after partition. They never considered moving to India, while the rest of the family did.

Barbara spoke with Ammi and me only in Urdu, which brought us even closer. She and Ammi often talked about the Partition and looked at it as not just a partition of a country, but a tragic partition of families. Ammi is 82, so 11 years younger. They stayed just a couple of rooms apart, in 121 and 124 respectively.

Barbara herself was born in Connecticut to the Reverend David Nelson and Marguerite Beach in 1921. She and her husband James Alter served the American Presbyterian Church as missionaries. They first landed in Karachi in October 1945, soon after travel opened after WW II. After 1948, she and Jim moved to Mussoorie, north India, and lived and worked there until his death in November 1983.

Meanwhile Jim’s parents continued to live and work in Pakistan, as they had since their move in 1916. Jim’s father died in Pakistan in 1952 of a heart attack. His mother lived on many years more and always maintained that overall, things were better in Pakistan than India.

Mussoorie is a hill station in northern Uttarakhand, 35 km from the state capital of Dehradun and 290 km north of New Delhi. It is famous for the Woodstock School, an international co-educational boarding school founded in the 1850s originally to provide Protestant education for girls. It still is among the best known international boarding schools of the region. James Alter was the Principal of Woodstock School, 1969 to 1983. It is a matter of pride for the Alters that three generations of their family have studied there.

Barbara focused on being of service to those around her, rather than proselytising or evangelising. Her understanding of herself was as a Christian who was firmly committed to social justice. She spoke to me often about the influences on her decisions to practice an ecumenical form of liberal Protestantism, from early childhood through retirement. She saw these influences coming from her family, Connecticut College and the New England Student Christian Movement. Her beliefs and faith were heavily influenced by Mahatma Gandhi, as well as the French Benedictine monk Abhishiktananda who moved to India in 1948, seeking a more radical form of spiritual life.

Barbara and many others of her generation who served as missionaries were interested in pacifism, ecumenism and cultural pluralism. Their influence reaches from their work in a variety of international settings to their own children and grandchildren, many of whom have chosen to continue working in the midst of poverty and injustice to enact positive social change. They want their stories heard at a time when they believe that fundamentalist evangelicals dominate the history of Christianity around the world.

It did not take me long to figure out that Barbara was a restless soul, whose can-do spirit was trapped in advancing age and deteriorating health issues.

Barbara had asked me to drop by to see her whenever I visited Ammi, even if it was only for a few minutes. Little did she realize how much I enjoyed taking the liberty of those informal visits to Room #124, whenever I possibly could. We almost always conversed in Urdu and she would often hold my hand when we spoke. We always parted with Khuda Hafez, the last two words Jim parted with, before closing his eyes forever.

Gordon College, Rawalpindi, November 2005: Barbara Alter (left), with Bob and Ellen Alter, in Pakistan for the first time in over 50 years visiting Barbara’s grandson Greg and his family who were living in Pakistan. Pictured at the Gordon College faculty bungalow where Jim Alter’s parents lived in 1947.

She specially took pride talking about her son Tom Alter, who has made a name for himself as an actor in Indian TV, theatre and cinema. I enjoyed making chai for her. She used to say, “Tumhari hath ki bani huwi chai mein shakar kum hoti hai aur piar ziada” (the tea you make has less sugar and more love). I told her about the Indian movie Cheeni Kum, which reflects on the small joys of life one can find, provided one can find the balance between that dash of sweetness with the right amount of salt.

I was overseas on a consulting assignment for most of November. When I went to see Ammi on Thanksgiving Day, November 27, 2014, the day after my return, I found her reading the Quran. Once done, the first thing she told me was that our friend was no more and that she now felt as if she too was sitting in a transit lounge.

I recall what was to be my last encounter with Barbara on October 31, 2014. Her son John and his wife Beth who live in Virginia were over, moving Barbara to a hospice not far from Wingate. As I walked with them to the stretcher ambulance, I realized that the end wasn’t too far away. Barbara left for her heavenly abode peacefully on November 9, 2014.

Barbara’s daughter Martha Chen, a professor at Harvard, will carry her ashes to India where they will be interred on May 2nd next to her husband in Mussoorie, the place she loved and lived half her life in. Members of the large Alter clan plan to gather for the solemn occasion, to remember and celebrate Barbara Alter. Truly, a lady of substance.

Siraj Khan is a Boston-based world citizen, a connoisseur of film music who is passionate about bridge building through art and culture.
Email: [email protected] | www.opnayyar.org