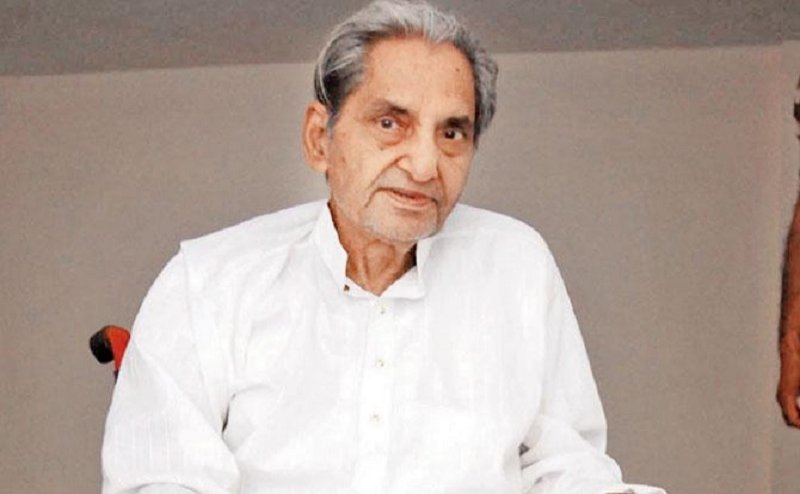 With the death of Gopal Das Neeraj in July 2018, Hindi and Urdu have lost a poet who could write with equal felicity in both languages.

Let’s take a look at this couplet: Ab to mazhab koi esa bhi chalaya jaye/ jis mein insaan ko insaan banaya jaye. This is loosely translated as: now we need to introduce a new religion which can transform the people around us into good human beings.

This one couplet testifies that Neeraj was a humanist to the core, and no religious or sectarian sentiment could blur his mind. At the time of his death, he was 93 years old and, according to his family and friends, he had been actively reading and writing till the age of 90. His memory was reportedly exceptional as he used to recite his 50 to 60-year-old poems ad libitum. In his advanced age, he preferred to write and recite dohas as opposed to long ghazals.

Gopal Das Saxena was born in 1925 in Etawah, a district in UP, India. From an early age, he could compose good poetry and started using Neeraj as his nom de plume through which he was known in the literary and film circles of the Subcontinent. Recognising his literary stature, the Indian government bestowed upon him two highest civilian awards – Padma Shri in 1991 and Padma Bhushan in 2007. Neeraj spent a substantial part of his life in Aligarh as a professor of Hindi literature at Dharma Samaj College.

Some say that if you can’t become a poet by the age of 40, you can perhaps never become a poet. But this apparently doesn’t apply to film poetry, as Neeraj started writing film songs in his 40s and still accomplished a great deal. At the time of Partition, Neeraj was 22 years old and could observe from close quarters the aftermath of the riots and mass killings. Like Faiz, Manto, Krishan and Bedi – who documented the horrors of Partition – Neeraj also used his pen to vent his sentiments.

During Partition,Neeraj wrote poetry to depict that tragedy of enormous proportions and, at the same time, not let his desire for peace die. Before turning to film poetry in the 1960s, Neeraj had already established himself as a renowned and respected poet of both Hindi and Urdu. The story of his entry into the film world is as interesting as that of Shailendra – another famous film songwriter.

First, let’s discuss Shailendra’s story. Shankardas Shailendra came to Bombay from Rawalpindi and got involved in progressive politics of that time by joining the Indian People’s Theatre Association (IPTA). He also worked at the Matunga Railway Workshop. In a mushaira (poetry session) he recited his famous poem ‘Jalta hey Punjab’ (Punjab burns). Raj Kapoor noticed him and wanted to use this poem in his movie ‘Aag’.

Shailendra initially refused, but when he was faced with acute financial problems, he went to Raj Kapoor and offered his services. This was in 1949, when Raj was directing his film ‘Barsaat’. Shailendra, in return for just rupees 500 – so the story goes – wrote songs such as ‘Patli kamar hey, tirchhi nazar hey’ and ‘Barsaat mein hum sey miley tum’. These songs became so popular that they opened new avenues for him in songwriting.

Neeraj and Shailendra are connected in the sense that when Shailendra died at the age of just 43 due to excessive drinking, a void was created in the Bombay film industry. This vacuum was filled by Neeraj to such an extent that he received various awards for songwriting for three consecutive years (1970-72). It is interesting to note that a poet who was orphaned at the age of six, and had to discontinue his education after school, worked so hard to establish his name in the film industry; though he remained associated with it for just five years.

The story of Neeraj’s entry into films went something like this: In 1966, as Shailendra had already died, Dev Anand was looking for a good songwriter for his upcoming film ‘Prem Pujari’. Dev Anand had heard and appreciated Neeraj’s ‘karwaan guzar gaya, ghubaar dekhtey rahey’, written in 1950 but used in the film ‘Nai umar ki nai fasl’ in 1965.

Dev Anand invited Neeraj to come to Bombay and introduced him to S D Burman. In those years, the music used to be composed first after which the poets used to fit in the lines of their poetry to match the sequence and tunes. To judge Neeraj’s capacity as a songwriter, Burman gave him a composition and asked him to write a song that must begin with the words Rangeela Re. The very next day Neeraj had come with the song that became immensely popular: Rangeela re, tere mann mein yun ranga hey mera mann.

Raj Kapoor, who until then was a fan of Shailendra, was also impressed by Neeraj and asked him to write songs for his film ‘Mera Naam Joker’. A song that was filmed in a circus became very popular: ‘Aye bhai zara dekh ke chalo’.

In a way, this song described the philosophy of life for Neeraj. With the story, dialogues and screenplay written by Khwaja Ahmad Abbas, this film was a gem that flopped at the box office. The music for this film was composed by Shankar Jaikishan, and that’s how in addition to S D Burman, Neeraj also came to enjoy the professional companionship of both.

Shankar and Jaikishan were two friends who used to compose music together and always used their names jointly. Shankar was from Hyderabad Deccan and Jaikishan was Gujarati. They both met in Bombay and composed marvellous tunes. Just like Shailendra, Jaikishan also sadly died at the age of 42 in 1971.

In 1971, another Dev Anand film, Gambler, hit the screens. This film also had songs by Neeraj, such as ‘Mera mann tera piyasa’, sung by Rafi and ‘Dil aaj shaer hey’, sung by Kishore. Finally, in 1971, another film, ‘Sharmeeli’, topped the list with perhaps Neeraj’s best song: ‘Khilte hein gul yehan khil ke bhikharney ko’, starring Shashi Kapoor and Rakhi. This song still mesmerises listeners. At a time when Majrooh, Kaifi and Sahir were the three kings of film poetry, Neeraj came like a flash and left like a bolt.

According to Neeraj, the reason for his leaving the film industry was the early demise of his friends – Jaikishan in 1971 and S D Burman in 1975. He then never felt comfortable with any other composer and resumed his teaching career. And what a career he had, reaching the position of vice-chancellor of the Mangalayatan University in Aligarh.

The writer holds a PhD from the University of Birmingham, UK and works in Islamabad. Email: [email protected]. This article was originally published in The News on Sunday, Pakistan, 11 August 2018.

New music video: Two nations, two anthems and one dream South Asians in Canada turn out for Afridi and a good cause