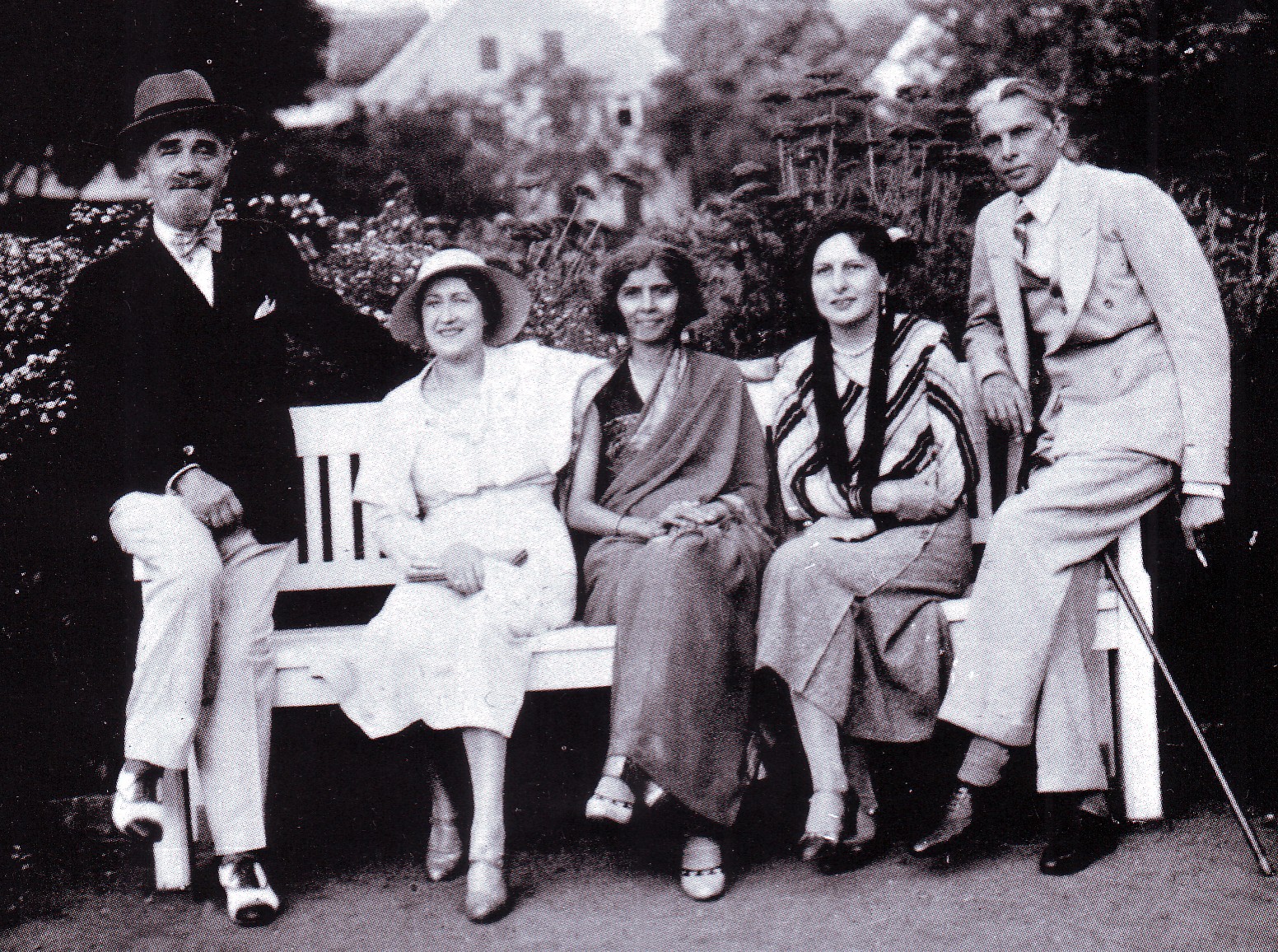 Fatima Jinnah and M.A. Jinnah with friends in Bombay

Commemorating the Quaid on his birthday, an Indian origin scholar expresses his support to those working for Jinnah’s Pakistan… with a reminder that it is also in India’s interests for Pakistan to progress along those lines

This December 25, as we commemorate the 140th birth anniversary of Quaid-e-Azam Muhammad Ali Jinnah (December 25, 1876 – September 11, 1948), let us reflect on this great leader’s vision and legacy. Let us ask ourselves retrospective questions about the journey our subcontinent has taken over the last century. Why was Pakistan created and what is its meaning? Is Pakistan meant to be antagonistic to India? Is contemporary Pakistan, Jinnah’s Pakistan? We must deeply consider these crucial matters if we desire peace between India and Pakistan.

A good point to start the search for Pakistan’s raison d’être would be the “two nation theory”, which laid the basis for Pakistan’s genesis. In a radio broadcast in December 1946, Mr Jinnah said, “Hindu India and Muslim India must be separated, because the two nations are entirely distinct and different and in some matters, antagonistic to each other. Let me tell you some of the differences. We differ in our history, culture, language, architecture, music, laws, jurisprudence, calendar and our entire social fabric and code of life.”

Many Pakistanis and Indians find themselves in an existential crisis when they see no difference between themselves and their brethren of the other religion across the border and indeed in their home countries. Attempting to address this critical issue, I notice two extremes emerging among people faced with this quandary. Some reject the two nation theory, seeing it as damage that cannot be undone. Others strive to uphold artificial antagonisms and emphasise differences to keep this theory alive.

Those unable to resolve their cognitive dissonance, believing that Mr Jinnah advanced the two nation theory, would do well to look back towards 1937. It was in that year, during the 19th session of the Akhil Bharatiya Hindu Mahasabha, held in Ahmadabad, that Veer Savarkar, President of the right wing ultra Hindu nationalist organisation, articulated the idea of Hindus and Muslims as separate nations. There are, he said, “two antagonistic nations living side by side in India”.

Jinnah with his daughter Dina in the 1930s

He went on to say that “several infantile politicians commit the serious mistake in supposing that India is already welded into a harmonious nation, or that it could be welded thus…India cannot be assumed today to be a Unitarian and homogeneous nation, but on the contrary there are two nations in the main; the Hindus and the Muslims, in India.”

This is the first explicit mention of the two nation theory, which clearly originated from the minds of the Hindu extremists. The Hindu Mahasabha had since the 1920s been antagonising non-Hindus through their “Shuddhi” (purification or conversion) and “Sangathan” (Hindu brotherhood) movements.

The notion of two separate nations in independent India, heralding the rule of one “nation” over another, further alienated Indian Muslims. It was this that led Mr Jinnah to assert that Muslim India and Hindu India must be separated and pushed his All India Muslim League into seeking autonomy in the Muslim-majority provinces.

This why Quaid-e-Azam said, “One India is an impossible realisation, it will inevitably mean that the Muslims will be transferred from the domination of the British to caste Hindu rule; a position Muslims will never accept.” This is what led him to create Pakistan as a separate homeland for the Muslims of British India. He wanted to safeguard their interests, apprehending Hindu hegemony in a united India that would have a strong centre under the one man, one vote system.

As historian Ayesha Jalal observes, “Jinnah never wanted a separate Muslim state; he was only using the threat of independence as a political bargaining chip to strengthen the voice of the Muslim minority in the soon-to-be sovereign India.”

The “architect of Hindu-Muslim unity”, a man who never actually considered Hindus and Muslims as separate nations, in fact used the view of the Hindu extremists to justify the creation of Pakistan. This is borne out by his demand for an undivided Punjab and Bengal.

Before the Radcliffe commission was appointed, Mr Jinnah told Lord Mountbatten, “A man is a Punjabi or a Bengali first before he is a Hindu or a Muslim. If you give us those provinces you must, under no condition, partition them. You will destroy their viability and cause endless bloodshed and trouble.” (Reicher, Stephen, and Nick Hopkins. Self and Nation: Categorization, Contestation, and Mobilization, London: Thousand Oaks CA, 2001, pg. 22)

The Quaid-e-Azam believed in Hindu-Muslim harmony, and ethnic rather than religious identities as a basis for nationhood. Even as late as the summer of 1946, he was prepared to discard the 1940 Lahore Resolution for Independent Muslim States in favour of the Cabinet Mission Plan that foresaw an independent, united India with a loose federation of provinces, clustered into three groups. Group A would comprise Hindu majority provinces — Madras, Bombay, United Provinces, Central Provinces and Orissa. The other two groups, with Muslim majorities, would be Group B, Punjab, North-West Frontier Province and Sindh, and Group C, Bengal and Assam (Ishtiaq Ahmed. “Pakistan the Garrison State: Origins, Evolution, Consequences, 1947-2011. Karachi: Oxford University Press, 2013, pp. 33-34).

Nehru and Jinnah before the break

The Cabinet Mission Plan also proposed a Delhi-based federal government that would deal with foreign affairs, defence, communications and raising finances for government activity. Quaid-e-Azam convinced the Muslim league that this was a better deal than the “moth-eaten Pakistan” – divided Punjab and Bengal — since the Group B and Group C provinces would incorporate the “ideology of Pakistan” and mean getting undivided Punjab and Bengal. Moreover, the Muslim League would also be able to represent the Muslims forming the minority in group A.

The Muslim League on 6 June, 1946 passed a resolution accepting the Cabinet Mission Plan. However, the Indian National Congress was for a strong centre and against this grouping of provinces. Mahatma Gandhi termed it “a solution worse than partition itself.”

It was thus Mr Jinnah who wanted a united, secular India with adequate safeguards in place to protect Muslims from a “Hindu Raj”.

In his Presidential address on 24 April 1943 to the All India Muslim League in Delhi, Mr Jinnah said, “I think you will bear me out that when we passed the Lahore resolution we had not used the word ‘Pakistan’. Who gave us this word? Pakistan is a word which is really foisted upon us and fathered on us by some section of the Hindu press… the word Pakistan has come to mean Lahore resolution.” (Cilano, Cara. National Identities in Pakistan: the 1971 War in Contemporary Pakistani Fiction. London: Routledge, 2011, p. 102).

Quaid-e-Azam M. A. Jinnah wanted a secular Pakistan that ensured minority rights. He said unequivocally that, “Pakistan is not going to be a theocratic State to be ruled by priests with a divine mission. We have many non-Muslims — Hindus, Christians, and Parsis — but they are all Pakistanis. They will enjoy the same rights and privileges as any other citizens and will play their rightful part in the affairs of Pakistan.” (Jalal, Ayesha. The struggle for Pakistan: a Muslim Homeland and Global Politics. Cambridge, MA: The Belknap Press of Harvard University Press, 2014. pg 54).

So, while he wanted the virtues of Islam to be enshrined in the Pakistan State Mr Jinnah would have never approved of an Islamist sharia mullah rule in his Pakistan. In his famous speech to the Constituent Assembly of Pakistan in Karachi on 11August, 1947, the Quaid-e-Azam stated, “…you are free to go to your mosques or to any other place of worship in this State of Pakistan. You may belong to any religion or caste or creed. That has nothing to do with the business of the State.” This shows that he envisioned a Pakistan that treats its citizens as equals regardless of their religious beliefs.

It is also worth remembering Quaid-e-Azam’s vision of relations between India and Pakistan. In the same radio broadcast of December 1946 that he spoke about the two nation theory, he expressed his confidence that India and Pakistan would “settle down as friends and neighbours like Canada and United States and other sovereign states, both in North and South America.” He never saw India and Pakistan as bloodthirsty arch rivals.

Sadly, the Pakistan of today is not the Pakistan he envisioned. The ruling Pakistan Muslim League-(Nawaz) manifesto admits as much when it says, “It is our (Pakistan) failure to build a democratic, progressive, tolerant Islamic state, as envisioned by Allama Iqbal and the Quaid-e-Azam”.

This reality is a result of geo-politics and Pakistan’s turbulent history and experiments with different forms of governance. While it is noteworthy that Pakistan is now making steady progress, it still has a long way to go before becoming Jinnah’s Pakistan.

Fatima Jinnah and M. A. Jinnah at breakfast

The Preamble of the Pakistan’s constitution says “We the people of Pakistan… Faithful to the declaration made by the Founder of Pakistan, Quaid-e-Azam Muhammad Ali Jinnah, that Pakistan would be a democratic State based on Islamic principles of social justice”. This binds the establishment of Pakistan to be loyal to the vision of the Baba-e-Quam (Father of the Nation). Pakistan’s main political parties, including Pakistan Muslim League-(Nawaz), Pakistan People’s Party and Pakistan Tehreek-e-Insaf, have all committed themselves to building the Pakistan that Quaid-e-Azam had in mind when founding this great nation.

I offer my best wishes and support to all those aspiring for Jinnah’s Pakistan. It is worth reminding ourselves that it is also in India’s interests that Pakistan progresses along those lines. India should support Pakistan in its efforts to be a democratic and prosperous state. Indians need to usher in new thinking when dealing with Pakistan if they desire regional cooperation in South Asia.

India must sit down with Pakistan discuss contentious bilateral issues. It should not fool itself that there is no Kashmir dispute. Without acknowledging the problem there can be no solution. If India shows itself to be willing to work with Pakistan, a non-security seeking Pakistan could emerge that is not antagonistic to India.

On this day, as we remember Pakistan’s great founder Quaid-e-Azam Muhammad Ali Jinnah, we should affirm that there is no need for Pakistan to even think of merging with India. What we need are cordial bilateral relations, free trade, removal of non-tariff barriers and visa restrictions as well as more people-to-people contact. This will increase goodwill between both countries and reduce war-mongering.

I extend full support to those working to build Quaid-e-Azam’s Pakistan. I hope that other Indians will join me in this.

(Dwell into your mind and search for the buried secrets of life,
If you can’t be mine don’t be, but at least become your own).

Anish Mishra is an independent researcher based in Singapore. Currently an undergraduate at the Singapore Institute of Management, is a former research intern at the Institute of South Asian Studies, National University of Singapore. The views and opinions expressed in this article are personal. Email: [email protected]

Kicking off the new year with a cycle rally for peace Pakistan’s move to release over 400 Indian fishermen,  a welcome goodwill gesture

One thought on “Remembering Quaid-e-Azam Muhammad Ali Jinnah, Pakistan and India should move towards peace”