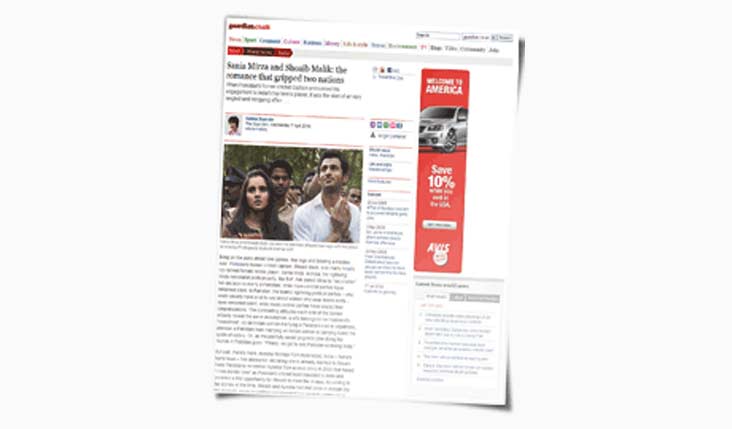 Guardian
When Pakistan’s former cricket captain announced his engagement to India’s top tennis player, it was the start of an very tangled and intriguing affair…

Bring on the puns about love games, fine legs and bowling a maiden over. Pakistan’s former cricket captain, Shoaib Malik, is to marry India’s top-ranked female tennis player, Sania Mirza. In India, the rightwing Hindu nationalist political party, the BJP, has asked Mirza to “reconsider” her decision to marry a Pakistani, while more centrist parties have remained silent. In Pakistan, the Islamic rightwing political parties – who would usually have a lot to say about women who wear tennis skirts – have remained silent, while more centrist parties have voiced their congratulations. The contrasting attitudes each side of the border actually reveal the same assumption: a wife belongs to her husband’s “household”, so an Indian woman marrying a Pakistani man is unpatriotic, whereas a Pakistani man marrying an Indian woman is carrying home the spoils of victory. Or, as the painfully sexist/ jingoistic joke doing the rounds in Pakistan goes: “Finally, we get to see Pakistan screwing India.”

But wait, there’s more. Ayesha Siddiqui from Hyderabad, India – Sania’s home town – has appeared, declaring she is already married to Shoaib. Many Pakistanis remember Ayesha from a news story

in 2005 that hailed “cross-border love” as Pakistan’s cricket team travelled to India and provided a first opportunity for Shoaib to meet the in-laws. According to the stories at the time, Shoaib and Ayesha had met once in Jeddah (by her account, which he neither corroborated nor denied), continued a romance via the internet and were married over the phone in 2002. As stories went it was a compelling one – love across the border but within the same religion (ie confronting prejudice without breaking taboo) and a pleasing mix of modernity and tradition (internet romances both break and maintain the strictures of arranged marriages by allowing couples to communicate while still maintaining a modest physical separation).

Three years later, Ayesha’s father declared that the marriage was over, but Shoaib was refusing to grant Ayesha a divorce. Shoaib insisted that though there was an internet romance, the marriage never took place. Now he says that yes, she pressurised him into taking part in a nikah – marriage ceremony – over the phone, but the chief qazi (sharia judge) of Hyderabad says a phone nikah isn’t valid in Islamic law and in any case, Shoaib says, the nikah is doubly invalid because he was deceived about who he was marrying.

“But did you go to a hotel room with her?” an Indian journalist asked at the recent Sania-Shoaib press conference, voicing the question on everyone’s mind. Shoaib looked pained. “First, tell me, who is Ayesha, and who is Maha? Tell her to come in front of me so I can be clear on this.” This is the crux of the issue. Shoaib says he believed the woman he had agreed to marry, and whose photographs he had seen, was called Ayesha. But he later found out the woman in the photographs and the woman who he had been speaking to (and agreed to marry) were two entirely different women. He is refusing to release the photographs because the woman in them, he has discovered, is already married and he doesn’t want to drag her into the scandal.

The “other woman” – who he agreed to marry – turned out to be someone called Maha. In a further twist, he says he had met Maha but believed she was an older relative of his fiancee Ayesha. Intriguingly, in 2005, prior to the Pakistan cricket team’s arrival in India, the BBC named Shoaib’s betrothed as “Ayesha (AKA Maha Siddiqui)”.

This tiny detail is of little relevance to Shoaib’s supporters, who point to photographs of Ayesha as proof that he clearly didn’t know who he was marrying. “How could a hot young cricketer choose to marry someone who looks like that?” they ask. (In Pakistan, as all around the world, deception about personality traits are to be expected in courtship, but deception about physiognomy is entirely unacceptable.)

Meanwhile, Pakistan waits to greet Sania with open arms, and well-chosen wedding gifts. Pakistan’s federal minister for population welfare has vowed to give the couple a “family planning kit”. Pakistani comedian Sami Shah remarked, “She is going to give them a condom as a wedding present. I guess they can cross that off their wedding registry. Now, who’s getting the blender?”