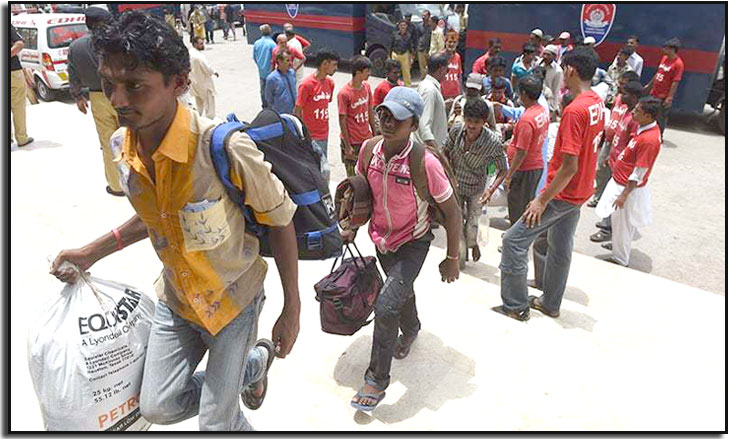 There is a universality about human nature that crosses all borders. Right here in South Asia, we rejoice about the numerous commonalities between India and Pakistan despite political tensions. We stress that we share the same food, clothes, languages, culture and even entertainment but what we choose to ignore is the pain that affects cross-border prisoners and their families.

This is highlighted by a recent feature movie based on the case of the Indian prisoner Sarabjit Singh, held in Pakistan for over 20 years, convicted of being involved in a series of bomb attacks in Faisalabad and Lahore. The movie emotionally depicts the story of an ordinary farmer in India who strays into Pakistan where he is captured on suspicon of espionage, and his sister’s struggle to defend him and bring back home. Tragically, a fellow-prisoner attacks him shortly before he is to be released, and he dies six days later.

Sarabjit, however, may not have been an ordinary farmer — a senior official of India’s Research and Analysis Wing (RAW) has admitted that he was a spy, caught while returning to India. “Some of the operations executed by the RAW during the period were totally mindless. Spies like Sarabjit and their family have paid a huge cost for it.”

Even so, Sarabjit Singh had more than served out Pakistan’s life imprisonment term, 14 years. Even if he really was what he was convicted of, his term ended long before he was killed.

Tragically, a similar attack on the day of Sarabjit’s funeral against a Pakistani prisoner in India, Sanaullah, apparently in retaliation for Sarabjit’s death, proved fatal. Sanaullah succumbed to multiple organ failure after suffering severe head injuries inflicted by prison inmates.

In another case, Waheed Noor, 38, allegedly entered India by crossing the border from Azad Kashmir’s Rawalakot area. Indian forces apphrehended him for violating border laws and he was imprisoned on charges of being a militant. Waheed had filed a petition in an Indian court and was exonerated twice, according to his brother Zahid Noor. Yet India held him for two years even after he completed his jail term and he died in a mysterious blast in a police van in 2015. Zahid alleged that Indian security agencies tortured him to death in prison in Srinagar.

Besides from army personnel and alleged spies, innocent fishermen also fall prey to this lunatic suspicion between the two nations which turns an innocent mistake into an excruciating, prolonged experience for them and their families. According to reports from both nations, these prisoners are not only kept away from their families but are even tormented, mutilated and harassed. They are starved for days and kept in uninhabitable conditions. Both countries have laws according to which individuals cannot be imprisoned without proper trial; sadly, our systems force our own citizens to face such horrors without giving them an opportunity to prove their innocence or undergo due process. When cross-border prisoners face such situations, their hardships increase immeasurably, with not even the relief provided by family visits and provisions.

To make things worse, these husbands, fathers, and brothers are often the sole earning members of their family who suffer immensely because of their loved one’s incarceration.

According to data collected by the cross-border youth group Aaghaz-e-Dosti regarding the details of Indo-Pak prisoners, in 2014 there were around 232 Indian fishermen in Pakistani prisons. They included eight prisoners who had completed their sentence but continued to be lodged in jail pending verification of their nationality. Another 49 Indian civilians imprisoned in Pakistan included 17 who had completed their sentence, some as far back as 2006 or 2007, but continued to be held pending verification of their nationality.

According to 2014 data, there were over 250 Pakistani prisoners in Indian jails of which 48 prisoners had completed their sentences but had not been freed. Another 27 were waiting for confirmation of their nationality.

I urge readers to share the data compiled by Aaghaz-e-Dost. This will firstly help families on both the sides of the border to get access to reports of their missing relatives, and secondly, pressurise both governments to hasten the procedure to release and repatriate these humans.

The India-Pakistan Joint Judicial Committee on Prisoners established in 2008 consisting of retired judges has been a ray of hope. The committee worked hard to seek early repatriation of prisoners who had completed their sentences in the other country’s jail and also ensure that they are treated humanely. It met every six months and visited prisoners in both countries.

For prisoners lodged in jails in the neighbouring country, meeting judges from the higher judiciary meant a lot. It gave them hope that they would one day return home. They brought to the notice of the committee members the hardships they faced in these prisons. This intervention helped the prisoners receive better medical treatment. It also allowed family members to find them through the committee members. Both governments applauded the role played by the committee.

Unfortunately, the committee hasn’t met since 2014 and has been non-functional from then. There is an immediate need to revive this committee.

Currently, more than 250 prisoners from India and Pakistan languish in each other’s prisons, many of them for years. As proof of our government’s sanity, we have even, on the pretext of national security threats, started to capture pigeons and monkeys cross the border without permission.

As rational human beings we need to realize that war means different things to different people. Most wars are driven by political motives for which civilians suffer. It is our duty to put an end to this lunatic behaviour towards innocent people.

A couple of dialogues from the movie Sarabjit, for all its flaws, are worth repeating:

“Kyun har Hindustani dushman, aur har Pakistani aatankwadi hai?” (Why is every Indian an enemy and every Pakistani a terrorist).

We need to look beyond the picture shown to us by politicians and politics- and ratings-driven media, and consider every life as equal regardless of religion, nationality, race or sex. There are no winners in a war. It is the people who suffer, be it in terms of life or property.

If we truly want to win, not against each other but with each other, we need to start by returning cross-border prisoners to their homes, especially once they have completed their terms. So ask yourself, do we need more Sarabjit-like tragedies or “Sab ki Jeet” (a victory for all)?

Devang Shah is a student of International Affairs with a keen interest in Conflict Resolution in South Asia. He is the founder of Aman Ki Asha Council, Nagpur Model United Nations.