Silver linings: Cooperation in a time of disaster 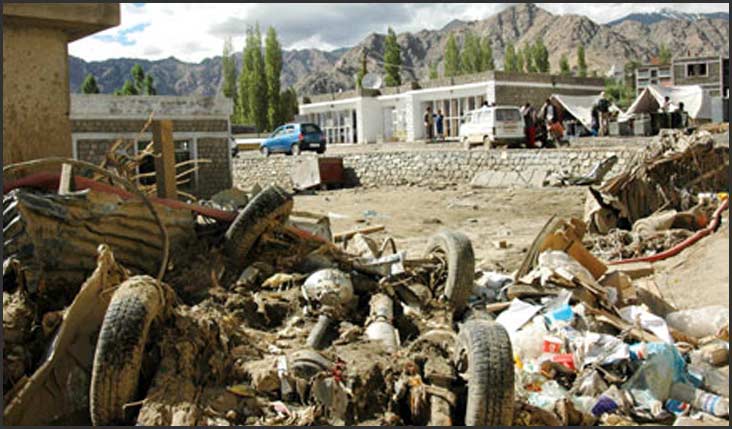 Muslim and Buddhist organisations in Leh work together to spearhead relief efforts, while the Pakistan army cooperates with India to find bodies washed across the border
By Zubair A. Dar in Leh

Ten days after Leh town and adjoining villages of Ladakh district in Indian administered Kashmir were devastated by flashfloods caused by a cloudburst, rescuers are still finding bodies as they dig through slush and debris in the destroyed houses. With 200 persons still missing, the Indian Army sent an SOS message to its Pakistani counterpart to help locate any bodies that might have been washed down into Pakistan.

As the Indian army helped to rescue stranded persons and treat the injured at their hospital, local Buddhist and Muslim organisations came together in Leh to lead the relief and rescue operations.

Relief workers find themselves fighting a battle against time to rehabilitate the 800 affected families before the onset of winter. The task is made tougher by the devastation to roads and other infrastructure like hospitals that have been filled with slush by the torrents that ran through the affected areas like rivers of mud.

Responding to the Indian Army’s request for help in looking for bodies that may have been washed downstream, the Pakistani army is maintaining a vigil and has initiated a search. In fact, Pakistan army officers have already handed one body over to their Indian counterparts.

“Pakistani army has handed over a decomposed body whose identification is going on. Most likely it is an army man,” says Lt Col J. S. Brar, the Indian Army’s spokesperson in Jammu and Kashmir. “The body was handed over at Post 43 at Kargil”.

Cooperation at the time of natural disasters between the two armies is a normal procedure, says Brar. “If a natural calamity happens, a request is sent to the other side for help. The other side always helps. Both of us are professional armies.”

During the earthquake in 2005 that affected both parts of Jammu and Kashmir, the two armies also cooperated in relief and rescue operations.

So far, officials say, 185 bodies from Leh have been recovered – the dead include 13 Nepali workers and five Western tourists. Around 500 people have been injured in the floods that brought down huge amounts of slush from the mountain slopes and deposited it across a part of the town and 16 outlying villages.

The injured are being treated at the Leh army hospital – that escaped without any damage – while an army helicopter service has been rescuing foreign tourists from various trekking routes where they were trapped because of the roads breakdown.

Search for the missing, including 30 Indian army troopers, continues. The process is made difficult by uncertain weather and low air pressure above 11,500 feet. So far, the Indian army has rescued 200 foreign tourists from different locations across Leh district in their choppers.

As portions of roads at many places were washed away by flashfloods or blocked by mud- and landslides, local people and foreign tourists are driving relief and rescue operations, volunteering with local Buddhist and Muslim organisations. Only a few international humanitarian organisations – Save the Children and Medicine Sans Frontiers – have reached Leh to help with relief efforts.

“We have acute problems of labour and equipment,” says Nazir Ahmad Khan, President of the Anjuman Moin-Ul-Islam. “The labourers, that come from places like Bihar, are running away. We have little labour available locally. Restoration before winter is very difficult.”

Observers fear that not all the affected families may be able to move back to their homes before winter, as many houses and gardens are yet to be cleared of the slush.

Khan says that the Muslim and Buddhist organisations have set up relief centres across Leh. “We take donations from locals as well as foreigners. Our boys, along with tourists who volunteer collect clothes, ration and money for distribution among affected families. We also have a survey Group that assesses where relief is needed.”

Adds P. T. Kunzang of the Ladakh Buddhist Association, “This is a tragedy that we have to face together. We have taken up the task of relief and rehabilitation and we hope to complete this task together.”

The writer is a Srinagar-based journalist. [email protected]