Sport: All the world’s a stage 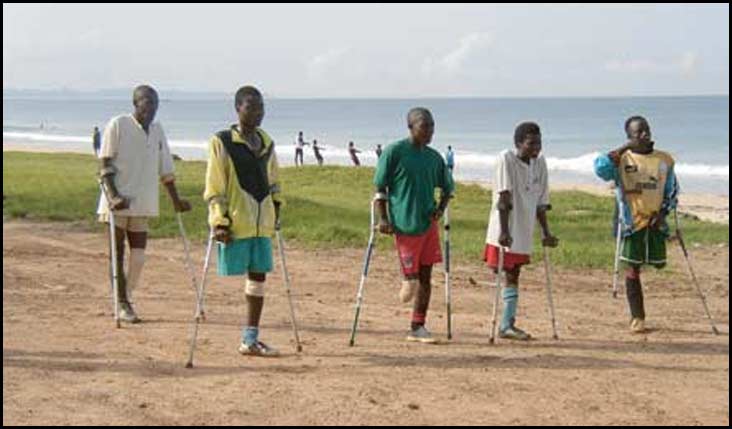 Sierra Leone: Youth play soccer on crutches, a sight that signals the end of a nightmare. Photo: Ken Shulman

In its purest form, sport is a contest where two parties compete within well-defined boundaries and rules. The swiftest over-100 metres. The most points over 60 minutes. Out on leg before wicket. These parameters create a sense of fairness, a transient but real meritocracy where tenacity and teamwork are rewarded, and sloth and guile are punished.

Of course sport rarely exists in this purest form. Today professional sport is soiled with money, media, and scandal. An angry alliance of social misfits, radical activists, and millionaires in private boxes has transformed our stadiums into vulgar reality shows. Regimes across the globe exploit sport to further their policies or conceal their injustice. Even youth sport has been sullied, with steroids and hormones handed out to teenagers, and coaches falsifying birth certificates to sneak over-age players onto their teams.

Still, sport continues to exert a visceral and a critical appeal—an irresistible wave of puppy love that makes it one of the most effective means of expression in our lexicon. We can be educated, urbane, and erudite, but in our Faustian reverie we would trade it all for a chance to soar just once like Michael Jordan. Great Britain used cricket to seduce the peoples it colonised; cricket’s overwhelming popularity in former British colonies is proof of its allure. Cuba’s Olympic prowess wins fans across the globe, and offers a rare moment of pride and respite for islanders struggling to survive in a hamstrung economy and a moribund regime.

Victory on the field is even foisted as proof of moral integrity. After the United States ice hockey team stunned the powerful Soviet side at the 1980 Lake Placid Winter Games, one U.S. commentator observed that “this just shows that our way of life is right.”

For some nations, particularly emerging ones, sport is a valuable rite of passage—a capability statement for up-and-comers ready to stake their claims at the grownups’ table. South Africa’s 2010 FIFA World Cup, China’s 2008 summer Olympic games, and Qatar’s recent successful bid for the 2022 FIFA World Cup are all enterprises designed to showcase building capacity, organisational wizardry, and hospitality to an audience of billions. You’ve seen us on TV, the smiling faces, the speeding trains, the gleaming cities. Now come visit. Come invest.

But it’s not all bravado and bank accounts. Sport is remarkably effective as a tool for youth and development. With its low bar to entry and broad appeal, it cuts across confines of class, religion, ethnicity, and, except where proscribed by society and gender, sport can help keep young people in school and out of trouble. Properly taught, it can impart lessons of commitment, dedication, and teamwork. Sport programmes in conflict areas are even more vital. A good coach or programme can steer youngsters away from a host of ills like drugs, gangs, early pregnancy, and child soldiering. Even where women’s rights are well established, sport proves invaluable to young girls searching to build confidence, identity, and social ties in a changing and fluid world. For spectators, sport is rich distraction, but even richer as metaphor and morality play. After disaster, or in the midst of prolonged doldrums, it can serve as a symbol of rebirth and recovery; there is a sense that the world is right so long as the boys are playing ball.

In 1986, Mexico showed its resilience by organizing a successful FIFA World Cup months after a devastating earthquake. Traumatized citizens of Sierra Leone find comfort (albeit sadly) watching youth who lost limbs in the horrific civil war play soccer on crutches. “The sight of the most visible victims of this conflict once again playing soccer on a beach lets us know that the nightmare is over,” one local journalist told me in 2005. On September 21, 2001, just ten days after the attacks on the World Trade Centerf, New York mayor Rudy Giuliani sanctioned the city’s return to life when he showed up (with television cameras rolling) at a New York Mets baseball game at Shea Stadium.

It is perhaps too easy and reassuring to cast games as meritorious micro-stages, noble tribunals where every David can seek justice against Goliath. In the early 1900s a Dalit named Palwankar Baloo helped tear down caste barriers when he bowled for Bombay’s Hindu cricket team — not without protest from some of its Brahmins. The deft left-handed spinner from the leather-working Chamar caste went on to represent India several times in international competition, and even served as Vice Captain. Jackie Robinson’s 1947 debut with the Brooklyn Dodgers—as the first African American to play in major league baseball—was probably the most significant gesture in the United States’ civil rights saga. In Sydney, Australia, a few months after Soviet troops invaded Hungary in 1956, the Hungarian water polo team brutalized the Soviets – the amount of blood in the pool led to the match being stopped. Boxer Muhammad Ali’s refusal to be inducted into the U.S. Army during the Vietnam War emboldened a generation of Americans to oppose—and ultimately end—that conflict.

Few sporting events are as politically and socially charged as cricket between India and Pakistan. The two nuclear nations have warred in Kashmir and East Pakistan/Bangladesh, and have lived an uneasy peace for much of their existence. They share common languages, cuisine, cultures, history, and of course a deep love of cricket. On the pitch, India and Pakistan have faced off scores of times. Some matches have been thrilling. Others have been dull—pantomimes performed by two sides fearful of returning home as losers. Crowds in Chennai and Lahore have applauded visiting teams on their victory laps. Thugs in Delhi and Karachi have torn up the pitch and set fire to grandstands. It seems now, however, that that players and fans are seizing this moment on the world’s widest stage to show that sport can be both fiery and fair, that sporting and even national passions can flame white hot, so long as those passions remain on the playing field.

The writer, a Boston-based journalist, wrote this for Aman ki Asha before heading to India for the India-Pakistan cricket series that he is covering for The Smithsonian Magazine, and NPR’s ‘Only A Game’