Stringd, Euphoria to perform together for peace 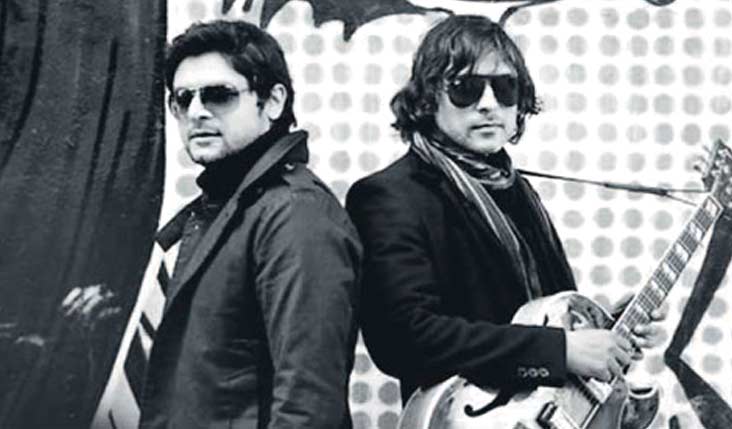 Pakistani band Strings broke into the Indian music scene with their track, Duur. After years of popularity here ‘ think Dhaani, Koi Aane Wala Hai ‘ they’re now participating in the Aman Ki Asha initiative to bring the two countries more paas. The band, comprising Bilal and Faisal, will be performing with Indian band Euphoria on January 20 in Kolkata, in a concert for Aman Ki Asha.

Faisal says that he firmly believes that peaceful relations between the two countries can be bolstered only through an exchange of ideas and culture. “Things are changing now. The generation that saw the Partition has grown old. The young generation is too far removed from that event to think of differences. We want peace, prosperity and friendship. We want to be neighbours, be able to enjoy each other’s presence. We’re a very mature generation,” he says, adding, “Cultural exchange is very important. It is necessary that we encourage student-exchange and encourage people to become friends with people of the other nation.” When people-to-people ties are there already, what role does he think politicians should be playing in this effort to being the two nations closer together? “The politicians have a very sensitive job to carry out. They are trying to find answers. It would help if popular support is with them, so that they can extend the hand of friendship towards the other country without worrying about their vote bank getting eroded!” says Faisal.

But when it comes to cultural exchange, that probably refers in a large part to music it is Pakistani bands and singers who are most popular with Indian audiences, and not artistes from other fields. “Well, that is right. Music is one industry that is stable in Pakistan. That is why it can be exported.”

“Sadly for Pakistan, we do not have a film industry that is making good movies. So, we are completely dependent upon Bollywood for cinema. So, in a way, it is a one-sided exchange,” Faisal replies.

What are his views on the perspective that some Indian artistes have articulated, which says that Pakistani musicians shouldn’t be allowed to play in India? “Ye shayad koi ek-aadh hi case hoga. As far as we are concerned, we feel blessed that all the great musicians of India have respected us and made it easy for us to play here. Music is not a product, that the presence of one will negate the value of the other. Music has no boundaries. It is needed all the time. Don’t we allow western music in our countries? And don’t we allow those musicians to come and perform here? Then why make such distinctions for a particular nation?” he asks with feeling.

That’s exactly what Aman Ki Asha seeks to achieve ‘no boundaries’ between the two people. “It is a great initiative. People from both the countries have wanted peace for the longest time. The Times Of India and the Jang group being the two biggest media houses in the two respective countries, it is an achievement indeed for them to have provided a platform like this!” says Faisal, talking about the initiative.

Strings, after Aman Ki Asha, will be concentrating on composing music for a couple of Bollywood movies. “However, it will be premature to talk about the projects,” says Faisal. If music be the food of harmony, Dr Palash Sen prescribes a healthy diet full of it. Talking to DT ahead of the Aman Ki Asha concert, in which his band Euphoria is performing with Pakistani band Strings in Kolkata, he hums one of their songs. “Aman ki asha, prem ki bhasha, seekho na seekho. Yeh sunehra khwab kal ka, dekho na dekho”, he sings softly, and says, “I hope our song makes a difference, and builds faith and trust among people. We need to spread the language of love, of hope, of peace in everyone’s heart.” Palash is passionate about Indo- Pak peace. “The common man has no issues with the Pakistanis. After all, why would we?” he says.

“Our pehnawa is the same; our khanapeena is the same. Several years have passed after the Partition, and they could not alter our common culture,and they never will. We will have to make the effort for a movement that takes us to aman. I believe that as more and more people attend these concerts, all those who are busy plotting and planning disturbances between the two countries will have nothing to do.” He says that people on both sides have had too much of the prevailing disharmony. “This harmony that we are looking forward to isn’t an effort by just a few people. Our intelligentsia, celebs, sportspersons, youth all of us have to come together and say, ‘Listen’ just stop it. Bahut ho gaya.’ It is my dream to remove the Indo-Pak border from people’s hearts, forever.”

And he has not a shred of doubt that it will happen. “Of course, the greatest revolutions in the world have taken place with effort. I really believe it can be done together.” He recounts his experience of performing across the border. “There’s a whole world of affection there waiting for us,” he says, “We performed in Karachi two years ago, and the amount of love Pakistanis have for India is just unbelievable. You cannot even imagine the love and support we received, when we performed in Pakistan. It was so touching.” He elaborates, “When we performed with Strings, we had such an amazing time. We guys partied like there was no tomorrow. Ten years ago, we even played for the UN General Assembly in New York, which was in 2001, after the 9/11 attacks. We have always been talking about peace and harmony in our concerts. Artistes have been doing their bit for 10 years, now it is the rest of the people who have to do theirs, and I believe that they really can make a difference.” The enduring appeal of Pakistani musicians, he says, has been great, and adds that it is because we provide them a platform.

“Yes, of course, they have an amazing fan following here. This is also because India has provided such a platform. Imagine, if there were no platform, we would have been deprived of such talent. Also, if a platform like Aman Ki Asha were not been there, the message of peace could not be spread,” says Palash. If the two peoples are not hostile, then, what role are the politicians playing ‘ and role should they be playing? “Unfortunately, in our country, the politicians take the decision for the average man, which does not help. What we need is a more independent, liberal and intelligent system. The average man has been fooled. In fact, the entire nation has been fooled. The suspicion that resides in our hearts is because of that. Toh yeh jo shak hai logon ke mann mein, usey mita dete hain.” He hopes that “our kids do not grow up in a hostile atmosphere.” His strong belief in the youth keeps his hopes high. “If something can be done to bring harmony, it can be done by the youth. I believe that, and I hope we can achieve it. We are in no way hostile, and neither are the Pakistanis. So if both the sides are not hostile, we only need to make the effort. Let there be a touch of humanity, and let us see differences melting away.”