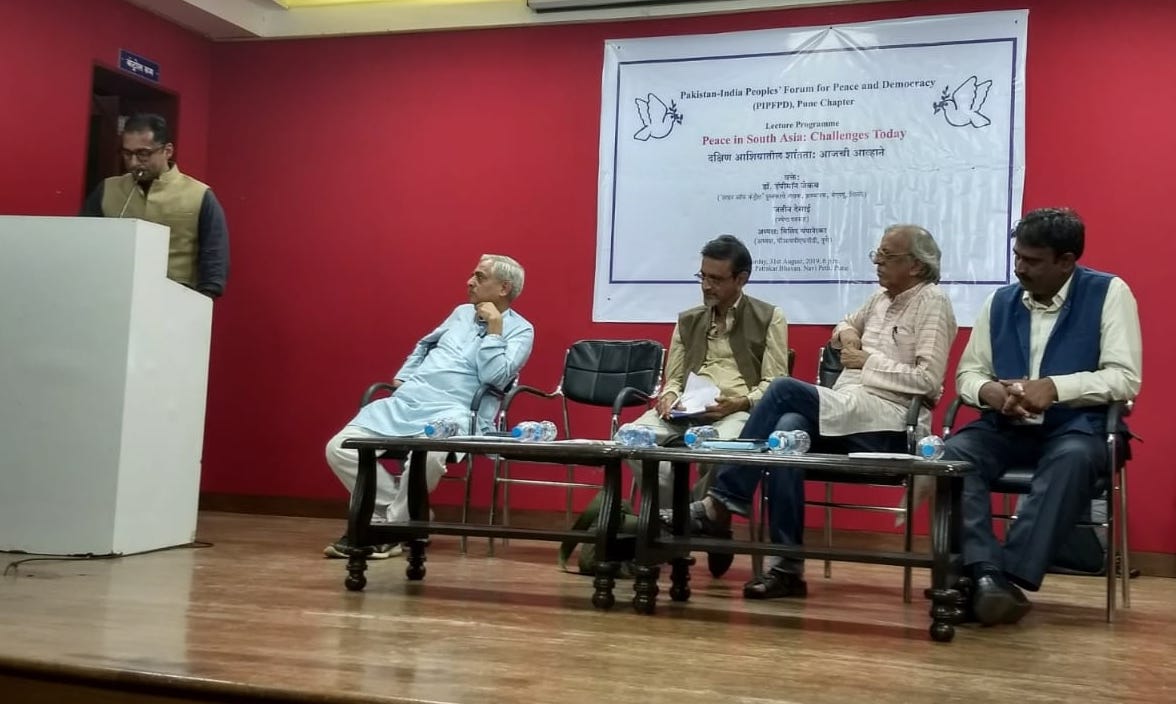 The oldest and largest India-Pakistan people-to-people organisation held a seminar in Pune titled ‘Peace in South Asia: Challenges Today’ where participants also paid tribute to the late Pakistani Malayali activist B.M. Kutty. They are planning another event to honour him next week in Mumbai.

Organized by the Pune Chapter of the Pakistan India Peoples’ Forum for Peace and Democracy (PIPFPD) Saturday, 31 August 2019 at Pune, the Peace in South Asia seminar was addressed by eminent academics, journalists and activists who expressed their concerns about the situation in Kashmir and the undemocratic moves made without taking Kashmiri people into confidence. They also feared that the National Registration of Citizenship (NRC) that India is pushing may further disturb peace in the region.

PIPFPD is also organising the upcoming event in Mumbai event to honour Biyyathil Mohyuddin Kutty, popularly known as B. M. Kutty, the peace activist and trade unionist who originally hailed from Kerala and dedicated his life for the peace in the region.

“Kutty Saab inspired many Indians including journalists to see things objectively. He was a frequent visitor to Mumbai,” comments Jatin Desai, a journalist and longtime member of the PIPFPD who knew Kutty closely and had traveled with him across Maharashtra by train.

“He never confined himself to Delhi and Mumbai. He addressed meetings in places like Jalgaon, Amravati, Pune, Nagpur etc. His down-to-earth approach made him quite popular in India. He was a Pakistani. His thinking and approach will continue to influence people both in India and Pakistan”.

Speaking at the Pune event, Dr. Happymon Jacob, associate professor at JNU, Delhi, and author of the acclaimed book ‘Line of Control’, described himself as “a nationalist who believes in unity, but one who respects diversity”. The difference between Unity and Uniformity he said, is that the latter, imposed without regard to linguistic or community practices, will lead to conflicts and disturb peace.

He feared the outbreak of violence in Kashmir, the government’s claims of normalcy notwithstanding. There is also the possibility of “undesirable nuclear competition” if Pakistan and China draw adverse inferences from India’s posturing.

Dr Jacob outlined the overall scenario in the context of the USA wanting to withdraw troups from Afghanistan, for which it needs the Taliban and Pakistan’s cooperation. He drew attention to Russia’s statement following the recent G7 meet which refers to the UNSC resolution (along with the bi-lateral Shimla Agreement) and also discussed India’s historical role in maintaining peace in South Asia.

An aggressive policy from India now can change political equations in the region, which might not be in India’s favour.

Speaking at the seminar, Jatin Desai urged governments to restore peace in the region by reviving SAARC activity with positive intent. “India and Pakistan must take positive steps in that direction”.

PIPFPD National Executive Committee member Milind Champanerkar looked back at that post-Cold War years following the Soviet Union’s 1989 withdrawal of forces from Afghanistan. “The politics of non-state actors and terrorist groups like Taliban became rampant with the help of US, which wanted to have control in the region.” Three decades later, US troops withdrawal from Afghanistan may again cause instability in the region”.

Full house at the PIPFPD peace seminar in Pune

“Today it requires courage of conviction to call spade a spade”, he added, particularly given level of discourse on the electronic media. Additionally, “even the senior ministers in both countries (India and Pakistan) are indulging in jingoistic rhetoric”.

B.M. Kutty’s autobiography ‘Sixty Years in Self-Exile: No Regrets’, published in 2011, has already been translated to Marathi, published by Sanjay Nahar’s Chinar Publications.

“In fact, we were waiting for him to come to India and release the Malayali translation of his autobiography in Kerala”, said Jatin Desai.

He and other peace activists in India plan to go ahead with the Malayali version of Kutty’s autobiography, which they say is needed now more than ever.

"Pakistani! This is Kolkatta, this is Bengal" Voluntary organisations in India plan to dedicate annual programme to Pakistani activist