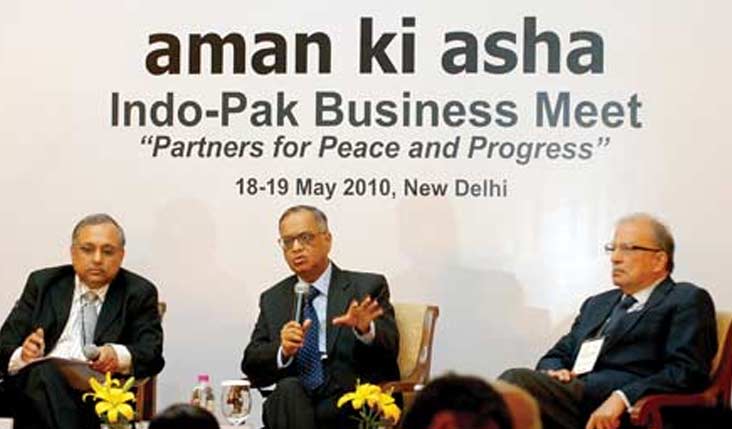 AKA is credited as being the most powerful and likely to succeed movement of peace between India and Pakistan. This is not only because it is led by the largest media groups of the two countries, but also because it has taken on board – and therefore enjoys the support of – all major stake holders: the government, all mainstream political parties, the military, the civil society, the youth, etc.

AKA attempts to push the peace process through a three pronged strategy: facilitates a fair and equitable resolution of all disputes through dialogue, strongly advocates economic collaboration as the single most powerful driver of the peace process and has increased cultural exchanges through greater people-to-people contacts.

The AKA campaign is seen as a game changer not only because it has captured the imagination of the people of the two countries by giving a voice to their opinion, but also because of its many practical achievements. For example, it has brought the business communities of Pakistan and India closer, by holding two of the biggest ever economic conferences attended by top government functionaries , business icons and senior leaders of political parties; these conferences articulated the benefits of economic collaboration and mapped the strategy and direction for taking it forward. Furthermore, AKA has also conducted independent, identical surveys in both India and Pakistan which showed the overwhelming desire of the people of both the countries for resolution of disputes and normalisation of relations.

Moreover, AKA has tackled the difficult and contentious issues in a transparent and effective manner as well. For instance, it openly and rigorously has been discussing the Pakistani, Indian and global view on the water, Siachen, Sir Creek and Kashmir disputes. Additionally, it has facilitated greater understanding of the complex issues as well as a better appreciation of each other’s point of view between the governments and peoples of India and Pakistan. And this is amply demonstrated out by the results of the surveys.