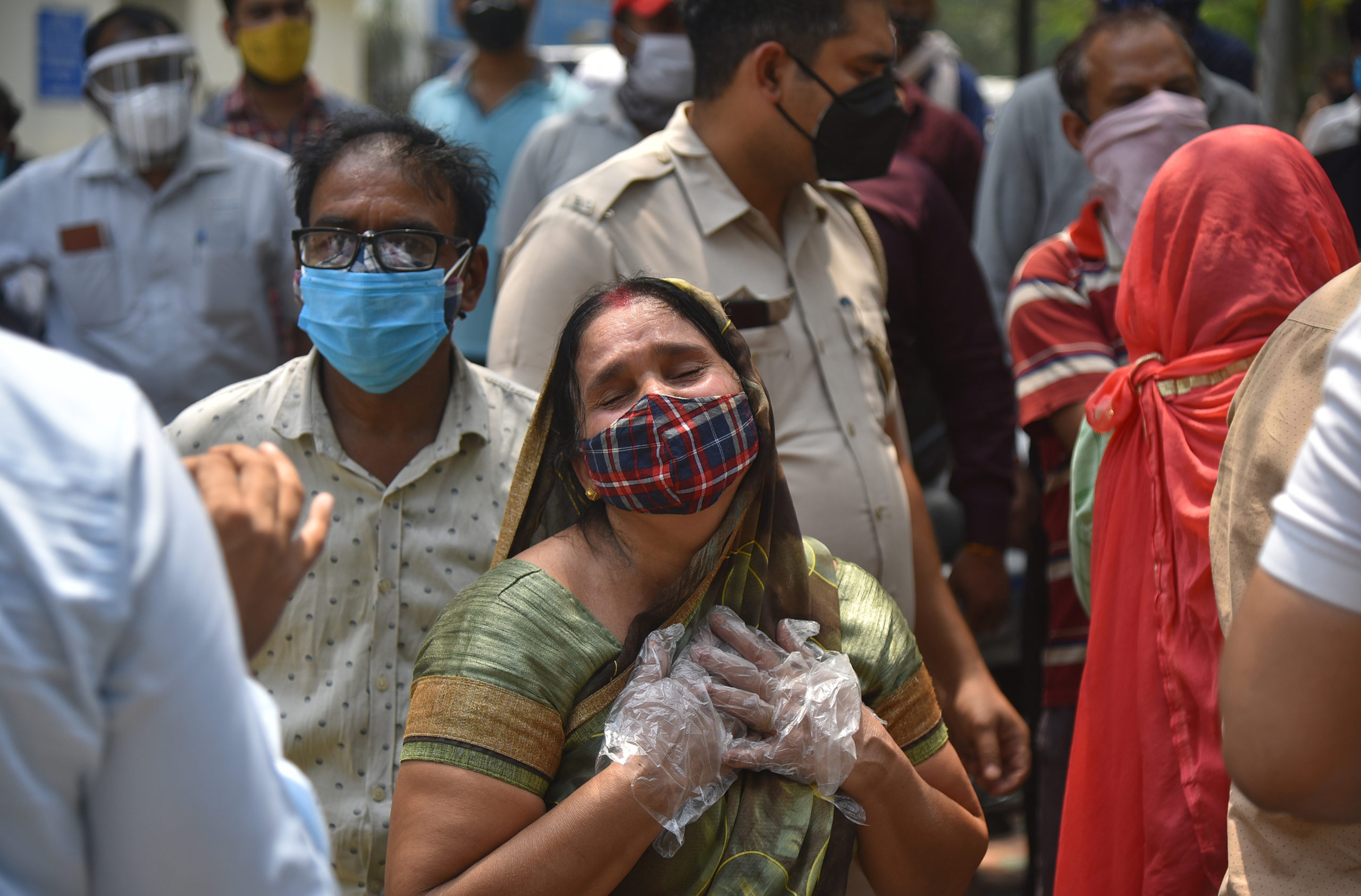 Family members outside a mortuary in New Delhi. Photo: EPA

“The mother and I have survived another day, without incident. Let’s see what tomorrow brings. Stay safe everyone,” tweeted Aman Malik, an Indian journalist.

Over 200,000 human beings have died in India of Covid-19 related causes since the pandemic flared up in the recent wave, a devastating reminder of how the situation can become dire so fast.

My Twitter timeline is shattered with tweets from my Indian Twitter buddies living a holocaust. Images of body bags with desperate pleas to crowdsource for an out-of-stock medicine, an ICU bed or oxygen for a loved one. A constant outpouring of pain and loss. But to quote King Lear, “This is not the worst as long as you can say, this is the worst.”

India, population 1.3 billion, reportedly marks one COVID-19 death every 5 minutes. To make sense of the pandemic, I reached out to Aman Malik, who has since 2006 covered the Indian economy in general to infrastructure and energy sectors in particular, contributing to CNBC-TV18, Business Today, Mint, International Business Times, Hindustan Times and VCCircle. He is a graduate of St. Stephen’s College, Delhi, where he majored in physics.

Excerpts of our written exchange below, slightly edited for brevity and clarity:

AZ: Does India’s inability to provide healthcare to its citizens show its dichotomy as a state that endeavours to become a regional hegemon?

AM: I vehemently disagree with you both as an objective journalist and as a nationalist Indian citizen, when you call India a regional hegemon. A hegemon is a power that asserts itself unduly in three main aspects – territory, economy and culture. India does none of that. True, India is the biggest military power in South Asia and also the largest economy. It is also true that India has serious territorial disputes with Pakistan and China and has gone to wars with these countries. But neither the size of its economy and military nor the fact that it has legitimate disputes, makes India a hegemon.

Also, will the coronavirus crisis really change India’s position relative to other countries in the region? Not really. As big a tragedy as it is, the country will recover over time. Also, just as an aside, just to be clear – India didn’t start any of the wars, it got dragged into them.

AZ: What would you say about extensive lockdown when the pandemic hit India last year?

AM: Last year’s lockdown was necessary, since no one knew anything about the new virus. It helped keep cases down although it wreaked havoc on the Indian economy. But no country can perpetually remain in a state of lockdown. The government should have used it to augment medical facilities and other logistical issues, so that when the country did open up, it would not be lacking in medical facilities, medicines, oxygen and whatever else was needed, to the extent possible. That did not happen, and the country has paid a price for it.

Also, both the central and state governments dropped the ball when it came to ensuring the adherence to strict Covid protocols. That is where India lost the plot. In India, the common people too are not disciplined, unlike say in Taiwan, Japan, Korea or China. So the blame rests with both the central and state governments but also with the people who were lax about following covid norms.

AZ: Anecdotally, over four dozen tweets were removed for allegedly criticising the Indian government’s Covid policies. What would you say about this censorship?

AM: Censorship is almost always a bad idea anywhere in the world. Yet almost all countries including the US, European countries and other democracies censor information. India is no exception.

AZ: What are the key things that needs to be addressed right now?

AM: The biggest concern right now is to halt the spread of the virus in India, and to save lives. So more hospital beds, oxygen, medicines, medical equipment and medical staff are the most required things. Then comes vaccinations. If India wants to successfully mitigate the impact of an impending third wave, it needs to vaccinate tens of millions of people, very quickly. The fact is, while India is the world’s largest vaccine producer and has an enviable record when it comes to carrying out vaccination programmes, this time the country’s administration has faltered. So, that needs to be set right, as soon as possible.

AZ: The people of Pakistan have expressed solidarity with their Indian brethren. Edhi Foundation and the government offered support at state level. So far New Delhi has remained mute on any reply. Don’t you think we should rise above political differences and diplomatic disagreements in this time of global crisis?

AM: The kind gesture of solidarity by the people of Pakistan and the offer of support by the Edhi Foundation were appreciated here in India. But as far as diplomacy goes, it may be tough for the government of India to accept aid from Pakistan. This is an issue on both sides. Just months back, when Pakistan was running short on medicines, they shot down the idea of importing medicines from India. Pakistan is still short on medicines and the Imran Khan government has still not allowed import of medicines. This is how diplomacy works – on a reciprocal basis.

I am sure if Pakistan allows imports, India will be happy to allow help to flow in, although that help would be meagre and basically a token, given the scale at which India needs oxygen and other resources right now. In the last two weeks, domestic capacities have also been ramped up on a war footing, and the country is in a better situation than it was by the end of April at least as far as oxygen and medicines go.

Having said all this, there is another issue. Pakistan’s own medical infrastructure is broken, which is why thousands of Pakistanis come to India for medical treatment. So, before it offers help to other countries like India, Pakistan should improve its own medical capacities, especially given that Covid infections are again on the rise there.

AZ: Several nations, including the United States, have pledged to ship vital medical and vaccination supplies to India. Does this olive branch make even a dent?

AM: Aid from the US, countries in Europe, Israel, Australia and several others has started coming in, and is beginning to flow where it is needed. There are bottlenecks in India’s own system, but those are also being addressed, although it could be done quicker. So, yes, help from richer nations, that have the ware withal in terms of the right medical and transport equipment and medicines, is making a significant difference.

The writer is The Pakistan Daily’s correspondent in Karachi who sent this piece for Aman Ki Asha. He tweets at @AbdullahhZahid. Email: [email protected].