The importance of trade with India 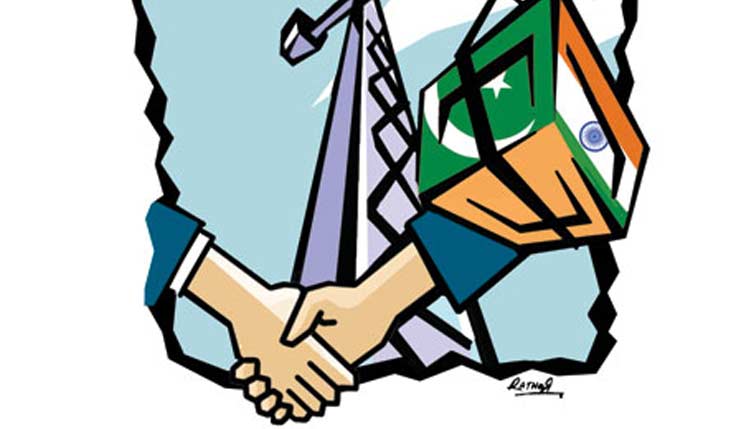 Not many Pakistanis know this, but India is one of Pakistan’s most important trading partners. It has been so for many years now, despite wars, terrorist attacks like Mumbai 2008, Kargil, and a host of other diplomatic and military misadventures.

The US continues to be the destination for approximately 18 to 20 percent of Pakistan’s total exports. Saudi Arabia, Kuwait and the UAE are Pakistan’s main source of crude oil – where oil accounts for around 20 percent of total imports. Besides this, the UAE also used to act as a conduit for third-country – mainly Indian – imports in the 1990s when direct trade between India and Pakistan was restricted. Malaysia also continues to be high on the import list, mainly for edible oil. The Middle East is Pakistan’s most important trading region because of oil imports, remittances and also since it’s the destination for some of Pakistan’s exports. China, which has emerged as the largest source for non-oil imports for Pakistan, is followed by Singapore. In terms of exports, after the US, it is Afghanistan, which is Pakistan’s second biggest export market, followed by the UAE, China and then the UK.

While the trends in exports and imports mentioned above do not seem particularly striking, what is striking is that India is today Pakistan’s eleventh largest trading partner. In terms of imports to Pakistan, India is Pakistan’s seventh largest source for imports. This figure is even more interesting since, of the largest exporters to Pakistan, three are oil-exporting countries (Saudi Arabia, UAE and Kuwait) and Malaysia, which exports mainly palm oil to Pakistan. Despite hostilities, wars and diplomatic breakdowns, the difficulties with visas and restricted communication between the two countries, Pakistan imported (based only on official figures, one must emphasise, which are perhaps 60 percent of actual volume) more from India than it did in from France, Canada, Switzerland, the Netherlands, Turkey, Iran or even Thailand. Pakistan imports from India about the same value as it does from Japan. Prior to the 2008 Mumbai attacks, India was Pakistan’s fourth largest source for non-oil imports – an amazing state given the political relations between the two countries.

In the last two decades, Pakistan has had a trade surplus with India in only one of these twenty years, importing far more than it exports. However, while many analysts point towards this imbalance of trade between India and Pakistan, the same imbalance exists with other trading partners as well. While Singapore might be Pakistan’s second most important source of imports, Pakistan exports less to Singapore than it does to India. Similarly, Pakistan exports more to India than Malaysia and Kuwait combined. Clearly, the India-Pakistan trade imbalance has been on account of structural weaknesses in Pakistan’s exporting capabilities and the absence of exportable commodities rather than anything else.

Most of Pakistan’s exports to India have been in the ‘food and related’ category, rather than in raw materials, manufactured goods or intermediate products. India’s exports to Pakistan (i.e. Pakistan’s imports) have been distributed over the categories ‘agricultural and allied products’, manufactured goods and chemical and chemical-related products. Both Pakistan and India’s imports have been heavily influenced by a single commodity, usually food items, although Pakistan is increasingly importing chemicals and tyre-related products.

Even under the existing curtailed and restrictive trading conditions, it is clear that India plays an important role in Pakistan’s trade regime. However, if trade between both countries were to be ‘normalised’ and barriers and restrictions done away with, India and Pakistan might begin to enjoy the same trade terms as China and India do, which benefit both countries. The benefits of opening up trade with India will have a favourable impact on Pakistani consumers (more choice and lower prices), manufacturers (access to cheaper raw materials and inputs) and even government, since there will be more income from trade and sales taxes, especially once illegal trade is routed through legal channels. Although some specific industries in Pakistan will have to deal with increased competition and will suffer, there is little doubt that there will be considerable net gain on account of opening up trade between India and Pakistan.

One other area which will benefit is employment, especially in the Punjab and Khyber Pakhtunkhwa belt. Once trade opens up, it will bring in greater employment opportunities in the retail, services and even manufacturing sectors. Over a longer time horizon, if trade is really normalised and investment also increases on account of increased trade, second-round impacts will also result in a multiplier effect on the economy. There seem to be very few, if any, arguments not to open up trade with India. Some specific industries will require some protection in the transition period but they will need to adapt to the idea of opening up trade and will need to diversify and modernise.

While these simple effects of trade will have consumer-enhancing and revenue-enhancing effects, the political economy nature of improved trade will also be positive. If more employment opportunities emerge, if India’s consumer goods find a large market in Pakistan and Pakistani goods in India, the benefits and gains from trade will outweigh the benefits of hostilities between the two countries. With Army Inc such a dominant figure in Pakistan’s economy, it too should look at increased trade as a means to making greater profits.

Trade might even lead to exchanges and alliances which today seem improbable. India and China have been adversaries for decades and are still involved in numerous border claims and disputes. However, China is today India’s largest trading partner and has moved from almost zero trade a decade ago to $65 billion today. India and China continue to sabre rattle yet trade actively. Most importantly, since 2007, India and China, despite numerous differences, have held three joint military exercises. Can we look forward to some between India and Pakistan over the next few years?

The writer is a political economist.