The need for an alternative India-Pakistan discourse 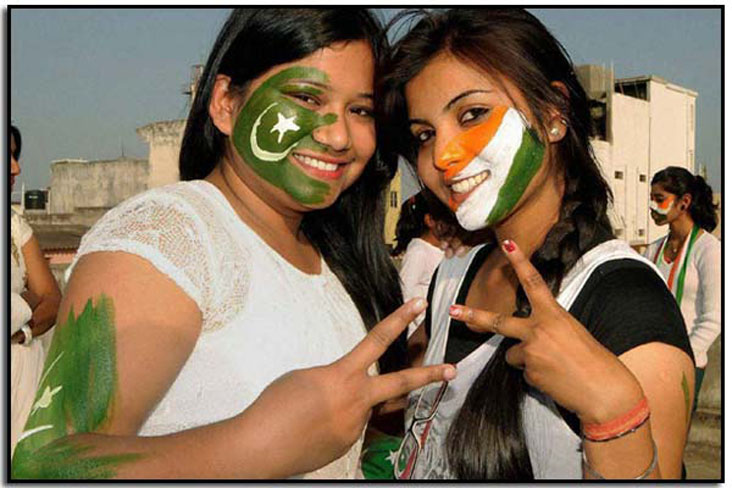 We must carry a resolve in our hearts. Those who seek to divide and break us will never rest – and neither should we

India and Pakistan, more than two separate countries with their ups and downs, share a long-standing animosity. Even as the world becomes more connected and civil rights progress in leaps and bounds, we see our hostilities as something akin to a birthright. We parade and wear this animosity like a badge of honour, fuelled by an unending conflict over land.

Beyond that, the fight is a battle for prestige, untenably linked with our national pride. We have made it a salient aspect of what makes us Indian or Pakistani, turning it into a glue that unites our citizens to divert from the differences within.

I reject the notion that I have inherited hate from my forefathers. I reject the premise that barbed wire and angry soldiers make up the giant wall dividing us. However, I do not reject the existence of the demons within our hearts – the fear, doubt and blind faith they incite, and the ease with which they have guided us for decades.

The language of our discourse, our news media, popular culture, politics and diplomacy is rooted in this animosity. There is no grand conspiracy for the status quo, or cloak and dagger mission to prop up this confrontationist attitude. What there is, is a strange comfort, a habit reared over the years, that we have used to forge the very chains of our hate.

It is easy to brand another country as the ‘other’, a ‘threat’, a race with a ‘savage’ way of life, when the dominant narrative reinforces these stereotypes, when we refuse to really see those who live on the other side of a man-made line, or to understand their pain, fear, hopes and dreams.

I know through experience that when we meet on neutral ground in a foreign land, we end up staring at a mirror – the same language, customs, hopes and aspirations.

When I attended college in Britain, my best friends were from Pakistan. We studied together, ate the same food, loved the same songs, films and sports and understood each other at a level not possible with students from other nationalities. The friendship developed through a natural process, and we even discussed India-Pakistan relations with fervour and gusto, having long and loud discussions.

However, that discourse itself reflected the very root of our animosity – our fear and our pride. Most of us have a latent drive to defend the image of our nations. We fear being seen as weak, malevolent or unjust. In each other’s company, discussing the issues of our nations, we tend to try and prove our own side “better”.

When we talk about corruption, poverty, social evils, the state of minority groups, the discourse spirals down to ‘its worse on the other side’, where we seem afraid to share the extent of the problems in our societies. We are divided over what caused the wars between our two nations, even the outcome of all military campaigns. Our pride becomes our biggest foe. We refrain from exposing those monsters, poisonous sentiments and medieval mindsets that feed on our insecurities and re-enforce the walls that divide us.

Why do we still struggle with this ‘hate hangover’ that prevents us from discussing our problems with honesty? Why can’t Indians and Pakistanis agree that terrorism is a scourge on both sides of the border? Why do we refrain from joining hands to condemn those who cause death and destruction in our lands?

Why can’t we admit that corruption, poverty, economic stagnation and communal disharmony are hindering progress on both sides? Why does our discourse lack the basic understanding that no religion can insulate itself from the evils that run rampant in society?

This language must change. We need to embrace the wisdom not only to recognise the fear and doubt in our hearts but also garner the resolve to face it. We must find an alternative India-Pakistan narrative to challenge the status quo discourse for legitimacy.

The current India-Pakistan discourse is reminiscent of a bar brawl – one that could lead to war. It does not reflect an enlightened polity. And it is magnified by the hawks of the fourth estate who are interested not in specific issues and socio-political contexts, but simply in upholding an aggressive stance. When those who are supposed to be our watchdogs promote such a discourse with relish, they do a huge disservice to society.

The India-Pakistan discourse needs to transcend the current avatar of a reality TV show. There needs to be a serious discussion between those who believe that war, aggression, intimidation and hate have done nothing to improve people’s lives.

We need to be honest when discussing the social and economic problems, dogma and apathy that plague both our countries. This admission of the malaise within both our societies is essential to raise awareness about the fact that our worlds and the evils within are not that different from each other. We face the same monsters at our doors and in ourselves.

The news media and civil society of both nations must draw out the liberals and the intellectuals from either side, thinkers with the courage to discuss the state of affairs with honesty and conviction. There is a long list of such people, especially the youth and we must give them the prime platforms. News media organisations and civil society need the resolve to unleash narratives to counter the loud, pervasive discourse of loathing, fear and doubt.

A serious, comprehensive and non-adversarial India-Pakistan narrative can have a significant effect on mindsets and deny legitimacy to those who police India-Pakistan ties, trying to derail cultural and sports ties which still hold us together. Resolve can go a long way to understand the value of prosperity, fulfilment and service to humanity when we tread the road to peace.

Many may call me a fool for holding on to my optimism, as our soldiers continue to die at the line of control and civilians face the blind fury of terrorism. But as a student of history, I have seen that peace and love has always persevered and overcome the trials and tribulations posed by the darkness of humanity.

Examples include the United States and South Africa have overcome decades of unrest and violence to sideline a mindset that treated Blacks as ‘inhuman’. After decades of struggle, same-sex couples have achieved civil rights in multiple nations where they were once seen as ‘abnormal’.

What these cases have in common is that a group of people realised the resolve to challenge a dominant yet ‘medieval’ narrative and persevered for the sake of something better. As a society, India and Pakistan do not have many differences. Our animosity is perpetuated by a lack of understanding, a tunnel vision that clouds our judgement. If more people within the news media resolve to unleash a non-adversarial and constructive narrative, it will have a huge impact.

It may not happen in my lifetime, but I have no doubt that Indians and Pakistanis are destined to live together as friends in an environment of peace and harmony. There will always be those who try and stop us using the pretext of religion and politics. Along the way, lives will be lost, and we will be scarred with hatred and disappointment.

Nonetheless, I am confident that peace will prevail. We may limp and even drag ourselves to this destiny, but our humanity will eventually overcome. We must carry a resolve in our hearts. Those who seek to divide and break us will never rest – and neither should we.