The novelist who changed generations 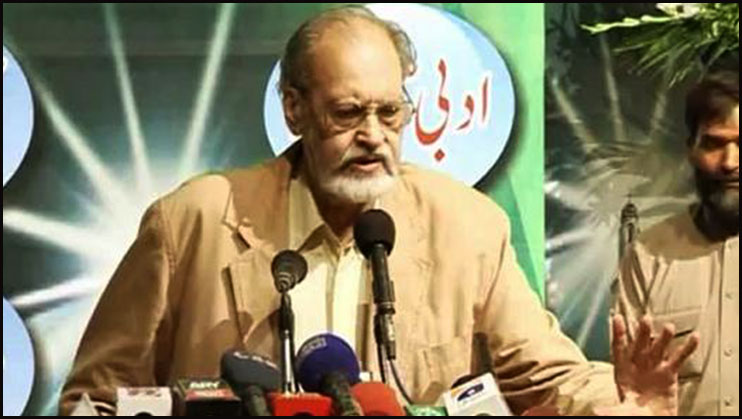 The myriad colors of Abdullah Hussein’s life included his liberal views and simplicity, traits by which he inspired many. Growing up, I didn’t know Urdu nor did I know of this legendary Urdu writer. It was as a young adult, when I started learning Urdu – a language I feel passionately about – that I first came across this great man and his writings.

One of his first and most acclaimed literary works is Udaas Naslein. My Urdu teacher, who introduced the novel to me, held that it was the greatest Urdu novel, after Deputy Ahmed Nazir’s Mirat ul Uroos.

My attachment to Abdullah Hussein is through his novel Udaas Naslein and his love for Urdu. Recalling some past moments he once said that his father compelled him to learn English and warned him of the consequences if he didn’t do so. “My father said I would have to sell tea wearing the oily and sugar smelling long knickers along the railway stations if I didn’t make it up with English.” It was the same Abdullah Hussein who authored “Émigré Journeys” which further was made into a British feature film ‘Brothers in Trouble’.

A substantial author with such a sizeable audience may involuntarily elevate his personal lifestyle to reflect his growing prestige and fan club. Not Abdullah Hussein. His tall, lanky figure refused to follow stereotypes. He was known to show up in casual pyjamas and comfortably draped long shirts.

To my mind, being humble and down to earth are the true attributes of an author who writes with ‘meaning’. The very souls of such beings are steeped with that ‘meaning’. They are there not merely to publicly showcase their compliance to their writings, but to be true to their inner selves and acknowledge their contributions to the people. That was Abdullah Hussein. Who would have imagined that a ‘run-of-the-mill’ guy with a quotidian routine of a chemist in a cement factory would start writing a ‘typical’ love story as a yearning to his monotonicity that would eventually turn into a novel which would shape generations.

For me, Abdullah Hussein is a man of substance, true to his principles and a human absolutely clear on his outspoken thoughts. For all the admirers and followers of Abdullah Hussein, the ‘Roshanpur’ he choreographed in Udaas Naslein has been a part of everyday life, the characters wandering in the novel are common individuals like us. This novel envisages the impact of the freedom fight, the atrocities and torture which subconsciously affected people to the extent that they produced a series of depressed and traumatised generations in post-independence era. The nostalgia and the dewiness of his writings will never fall dry from our hearts.

Though Abdullah Hussein is not amidst us now, those who love his writings will still find him within ourselves, dwelling on and playing roles of the characters he painted in his novels and stories. Though the background has changed, time has driven long way, but Abdullah Hussein will continue to inspire generations, and change generations.

Below is the epitaph for Abdullah Hussein’s grave which he chose himself, lines from Allama Iqbal’s famous ‘Shikwa’.
آئے عشاق ، گئے وعدہء فردا لے کر
اب انھيں ڈھونڈ چراغ رخ زيبا لے ک
“There came passionate lovers; and with future promise they turned away Now go searching for them in the light of your radiant face”

Mayur Indi is a businessman, writer and English-Marathi-Urdu-Hindi translator based in Solapur, Maharashtra, India. Email: [email protected], Twitter @indimayur.
Note: Some references for Abdullah Hussain’s life are drawn from an article by Muhammad Hanif, BBC Urdu, and from Abdullah Hussain’s exclusive interview to Irfan Javed, The Friday Times.

One thought on “The novelist who changed generations”