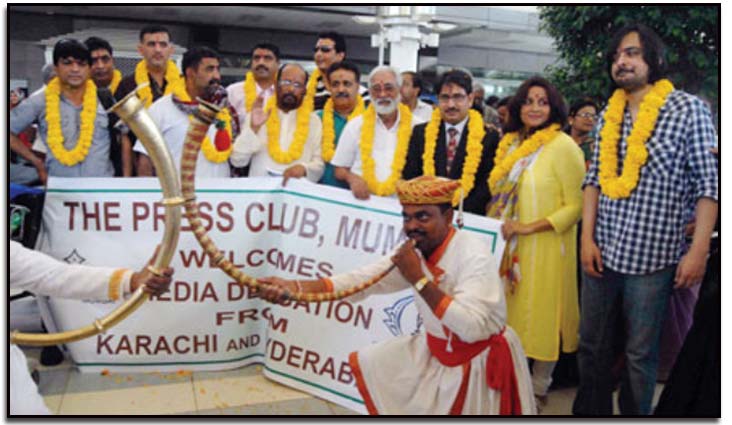 A 14 member delegation of Karachi Press Club arrived on Monday in Mumbai to a warm traditional welcome at the Sahar International Airport. Photo courtesy Jatin Desai

Indian and Pakistani journalists at a media conclave in Mumbai on Tuesday called on the media to create an ambience to improve relations between the two neighbours. The Press Club of Mumbai is celebrating Karachi Week on the occasion of the visit of journalists from the Karachi and Hyderabad (Sindh) Press Clubs. The Mumbai and Karachi Press Clubs have established sisterly relationships.

The Pakistan delegation’s visit to Mumbai and Pune from May 21-27, 2012 reciprocates the visit of journalists from the Press Club of Mumbai’s to Karachi and Hyderabad in November last year. The 14-member strong delegation includes representatives of various newspaper and television channels including Dawn, Jang, ARY TV and Geo TV, most of whom are visiting India for the first time.

The Pakistani visitors were received at Mumbai’s Sahar Chatrapati Shivaji International Airport on Monday by a large number of journalists and cameramen. They received a warm welcome with musicians blowing tutaris and aarti by ladies in traditional sarees. On Tuesday morning, The Press Club of Mumbai hosted a reception and a conclave on “The Role of Media in Promoting Peace in the Subcontinent”.

Speakers from the Pakistan delegation, Karamat Ali, peace historian and trade union activist, and President of the Karachi Press Club Tahir Hasan Khan, Special Correspondent of The News International made a plea for journalists on both sides to avoid using the language of hatred. They also called for visa liberalisation between the two countries.

Journalists covering cricket matches between the two countries always describe them as traditional rivals, said Karamat Ali. “Even in Pakistan, the Urdu media refers to them as ‘Azli Dushman’ – eternal rivals – as if we have been enemies right from the creation of the world.” He urged India and Pakistan to allow “visa on arrival” as Nepal and Sri Lanka do. Easing the movement of people between the two countries will go a long way in establishing regional peace. Journalists are not the part of the armies of both nations, pointed out Tahir Hasan Khan. “We are the people and we report to the people. We the media persons should report on people-related developments and contribute to maintaining peace and harmony between our nations,” he said.

Gurbir Singh, President of the Press Club, Mumbai, likened the barriers between India and Pakistan to the great “Berlin Wall” that “has to be demolished”.

The Press Club Mumbai has initiated the exchange of media visits because the media has a major role to play in improving the relations between the neighbouring nations, he said. He hoped this movement will gain momentum in future with “visits from other Press Clubs to various Pakistan cities and vice versa.”

Journalist and peace activist Jatin Desai urged the governments of India and Pakistan to increase the number of journalists they allow to report from each other’s countries – at present both allow only two each which “obviously limits the scope of reporting by media.”

B N Kumar, Executive Director of Concept PR, suggested setting up an “Information Exchange” on the websites of Mumbai and Karachi Press Clubs and make a beginning in the process of sharing information and news between media persons. It’s time for media organizations from India and Pakistan to take the initiative and make use of information technology, without waiting for the governments to allow such reporting.

During their visit, the Pakistani journalists will have interactions with leaders of various political parties, industry leaders, journalists, social activists and common people. They are also scheduled to visit the Chief Minister of Maharashtra Prithviraj Chavan, and Home Minister R. R. Patil, as well as the Bombay Stock Exchange and some newspaper and television channels offices.