The real cost of conflict in South Asia 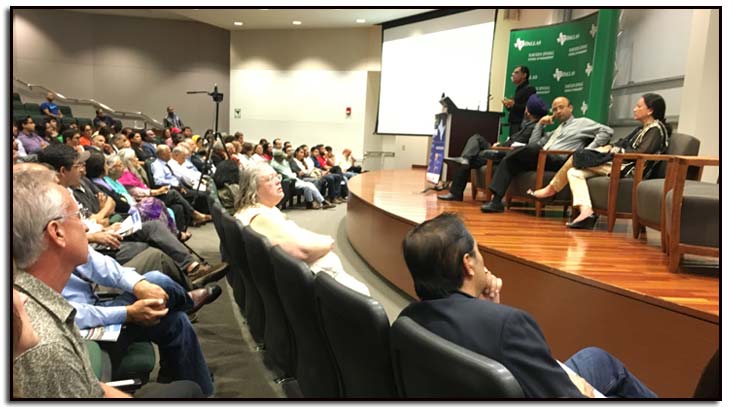 Born in the Rawalpindi area in 1943, Suresh Bakshi was about four years old when his family left their ancestral home after Partition in 1947. But he still remembers and has strong feelings for the place where he was born.

These feelings created a powerful conflict when, as an Indian Army soldier, he fought in the 1965 war against Pakistan.

Last Saturday, talking on the phone to a young man he had never met, Bakshi painfully revealed how difficult it was for him to order artillery fire toward his birthplace.

“Hearing the emotion in his voice, I found it hard to hold back my own tears,” Dr Pritpal Singh, 40, told the audience during his talk at a symposium on “Pakistan, India and Kashmir Peace Talks: Why war is not an option”.

Held at the University of Texas, Dallas on Oct 10, 2015, the event was organised by #ProjectPakistan, an initiative to further dialogue. #ProjectPakistan is a platform (not an NGO) for dialogue and philanthropy started by Karachi-born physician Dr Mona Kazim Shah who hosts a radio talk show in the Dallas area.

Some 150 academics, expats, activists and students packed the auditorium, far beyond the 80 or so the volunteers, many of them students, had expected. Unusually for a desi event, the symposium started — with musicologist Amie Maciszewski’s a haunting sitar recital — and ended on time.

See a timeline of live tweets from the event here.

Bakshi, who retired from the Indian Army as a major and now lives in Texas, was in the audience, among the handful of those present who were born in pre-partition India. Dr Singh, a physician and peace activist, acknowledged them as he began his talk, asking them to stand up and be recognised.

“The real cost of conflict in South Asia,” he said, “is the emotional trauma people carry with them still, to this day. It’s not just the money or the land, but the human cost of conflict, something that is difficult to capture.”

Those born before 1947, Dr Singh pointed out, had suffered through the pain of Partition, of having to leave their homeland. He urged audience members to seek them out and hear their stories.

He contacted Major Bakshi through a mutual friend, also a former Indian Army officer, whom he had invited to the symposium. The friend, a retired colonel was unable to attend the event at the last minute but referred Dr Singh to Suresh Bakshi. Dr Singh called Maj. Bakshi literally two hours before the event.

When they spoke on the phone, Maj. Bakshi initially said he would not be able to make it to the event. “Maybe next time,” he offered.

However, he called back a few minutes later. His wife had convinced him to go. She knew the conflict he had been through. It was something he needed to do, she said.

I was privileged to be part of the panel with Dr Singh and others, including journalists Amitabh Pal of The Progressive and Raza Rumi of The Friday Times, as well as Dr Nyla Khan, a professor of Kashmiri origin teaching at Oklahoma University.

Among the pre-1947 born audience members whom Dr Singh invited to stand and be recognised was my mother, born in Pratapgarh, India. She moved to Pakistan when she was 15 years old and still feels emotional when she hears the Indian national anthem.

Does her love for India mean she loves Pakistan less, or that she is not patriotic? We don’t think so. We know how much she has put into Pakistan, how she goes out of her way to project Pakistan in a positive light and trains and mentors Pakistanis who will bring a good name to the country.

The title of the symposium included the contentious K-word that tends to send some people into a tizzy. At the official level, neither India nor Pakistan want to recognise Kashmir as a separate entity. India insists that Kashmir is its ‘atoot ang’ (integral body part), while Pakistan terms Kashmir as its ‘sheh rugg’ (jugular vein). As Raza Rumi pointed out in his talk, it really can’t be both.

So what is it? I personally like the formulation articulated at the first convention of the largest people-to-people organisation between India and Pakistan, the Pakistan India People’s Forum for Peace and Democracy (PIPFPD), in 1994: Kashmir should not be treated as a territorial issue between India and Pakistan, but as a matter of the lives and aspirations of the Kashmiri people, who must be involved in any dialogue about their future.

The on-going shelling and firing across the disputed Kashmir border is a blatant violation of the 2003 ceasefire. Each side says the other started it. Each only acknowledges its own suffering. The fact is that soldiers and civilians – human beings — are dying and injured on both sides.

Besides the human cost of conflict that Dr Pritpal Singh emphasized in his talk, there is the financial cost, and the fact that over 1.2 billion people – one-fifth of the world’s population – are held being hostage under a nuclear shadow.

The point is not who started it, or who escalated tensions. Let’s acknowledge that both sides have been engaged in undermining each other’s sovereignty and politics. The media have contributed to this by feeding stereotypes and misperceptions. The ‘othering’ takes a dangerous turn every time hostilities flare up. It is easier to go to war when you see the other side as somehow less human.

But the rise of the Internet and social media has helped break barriers like never before. Despite the trolls and hate-mongers out there furthering their agenda with alacrity, more and more people are questioning out-dated narratives that cast ‘the other’ as ‘enemy’.

It is beyond time that the governments followed the people to peace.

3 thoughts on “The real cost of conflict in South Asia”