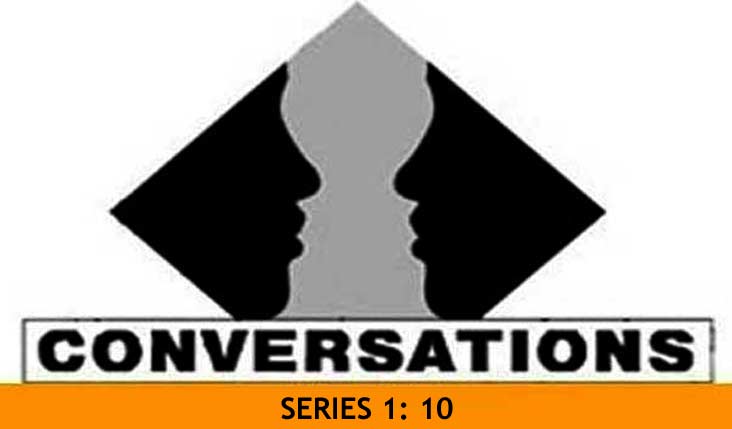 I am heartened too by our PMs meeting in Thimphu. But let me say that I also have hope from such events as your Aman ki Asha seminar, where there’s discussion between folks from both sides who have less political pressures on them than ministers.

Still, while I don’t mean to second-guess what happened at the seminar, I wonder about the urge to build a “consensus” in discussions like these. Is that always necessary or useful, what do you think? I wonder if we end up watering down our own emotions and concerns in the search for consensus, and thus leave them essentially un-addressed. If that’s at all true, it’s not a good prescription for peace.

So what do you think about building trust?

In this exchange so far, we’ve touched on terrorism, water, Kashmir, perceptions, condescension, nationalism, the hold of fundamentalism and more: all themes that devil our relationship. None of it in great detail, but that’s fine. This has been in the nature of laying cards on the table, explaining the serious concerns that won’t just go away. Having done that to the degree we have, I’d like to suggest that we think about what it takes to build trust.

Because the more I think about it, the prime obstacle to peace between our countries (or any mutually hostile countries) has got to be the profound absence of trust between us. In India, there are people who will mistrust anything a Pakistani says, and I mean anything. There must be similar people in Pakistan, unable to listen to an Indian with less than a jaundiced ear. How do we overcome that? And if we cannot, what is the hope for peace?

And so, given the news that dominates everything else this week, at least in India, I’m wondering if there’s an opportunity to do something that might just be a building block for trust.

I refer to the judgment and sentence of Kasab. Who could have expected anything less than a death sentence handed out to him, given that his slaughter was played out on TV screens all around the world? Yet who believes that he is anything more than a pawn? Who believes that executing him will put a stop to terrorism, especially given that he came to my city fully expecting to die like his colleagues all did?

Therefore: what if he stayed alive and was used in a joint India-Pakistan effort to identify and take action against the powerful instigators of terrorism who put him on that boat? Surely that’s a goal enough people in both countries want.

If this ever happens, it would be the real measure of justice to Kasab’s victims. But more than that, if it happens, it would require the justice machinery in both countries to be open with each other, share information, things like that. Things that will lead, almost by definition, to trust. And if this is done properly, that feeling of trust will inevitably spread to the rest of us.

What do you think? Does this make sense?

Towards the end of Stieg Larsson’s “The Girl with the Dragon Tattoo”, one character says to another: “Friendship is built on two things. Respect and trust. Both elements have to be there. And it has to be mutual. You can have respect for someone, but if you don’t have trust, the friendship will crumble.”

I’ve been brooding about those lines most of this week.

How do we build trust? Those involved in trust-building exercises and peace negotiation experts would say that the first step is to acknowledge the feelings of the other party. But there’s as step that is a pre-requisite to that: letting people meet.

One of the things that has prevented trust-building between our two countries is that we have created a virtual Berlin Wall between us that prevents regular contact. It is just too darn difficult for people to visit each other. There’s no tourist visa between us. People are given visas for specific cities for limited times, for specific purposes. They have to produce all kinds of documents for this purpose. Once the visa is granted, they must report to the police on arrival and departure and enter and exit from the same point.

When the governments at some soft moment gave visas to hundreds of Indians and Pakistanis to attend cricket matches in each other’s countries, people went home with a whole new way of looking at the other country. They made personal contacts and began moving towards trust. That’s why one of the Aman ki Asha campaigns being launched focuses on this issue.

Yes, trying to forge a consensus does dilute a joint statement. But the Common Destiny statement (on the Aman ki Asha website – www.amankiasha.com) is a pretty good document. It doesn’t go into specifics but agrees on broad principles. That’s also a starting point towards trust building.

Thanks for your thoughtful comments on Kasab’s hanging. I agree that his execution will not stop terrorism; he’s a pawn in a larger game. The trail of obvious clues that the Mumbai attackers left suggest that those responsible wanted Pakistan to be linked with the attacks, triggering hostilities between our countries. Consider the timing: it happened just four days after President Zardari declared that India is not Pakistan’s enemy and that Pakistan would follow a no first-use nuclear weapons policy.

Many Indians feel there’s no point talking to the Pakistan government, given the strength of the ‘establishment’ here. I understand the scepticism and cynicism but feel that some of it stems from the sense of superiority we discussed before: “We’re a world power, let Pakistan rot.”

This thinking lumps all Pakistanis with the section that supports these jihadis — like a section of Indians support the saffron brigade, ‘Indian Taliban’. Yes, there are significant differences: Pakistan’s geo-strategic location contributed to the historic trajectory of the ‘Islamic warriors’ trained and funded under a military dictatorship, aided by America and Saudi Arabia. Yesterday’s Mujahideen, feted by the White House, are today’s Taliban.

The fallout has taken the biggest toll on us in Pakistan. We must change this trajectory and tackle the issue for our sake, not because others say so. I believe we’re trying to do that in the face of violent opposition from the jehadi elements and their protectors.

That makes it all the more crucial for Pakistan and India to continue trying to resolve all issues through dialogue. Not just through the governments (riddled with various problems, including some mentioned above), but also by normalising relations, allowing people to meet.

Bottom line: a strong, democratic Pakistan that has good relations with all its neighbours is what will defeat the jehadi forces.

Thanks for being there