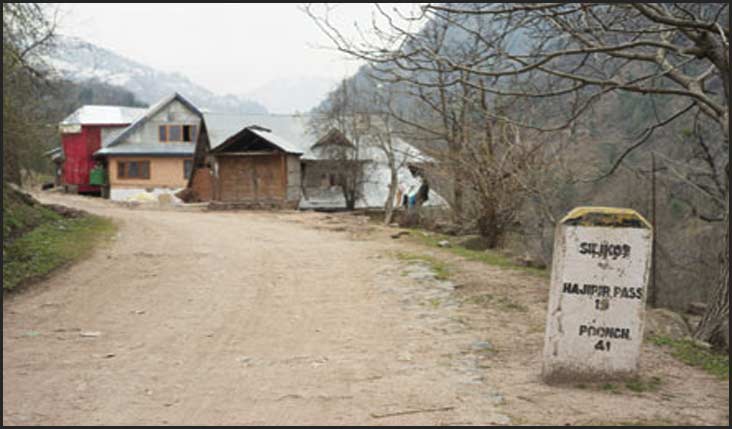 A filmmaker shares stories of people whose lives are split apart, sixty-seven years on, by continued political earthquakes

A few years ago, I set out to make a film in an attempt to understand the history and legacy of the 1947 Partition, particularly as it related to the Northwestern side of the Indian Subcontinent. There was global focus on this geographical area in the fallout of the 9/11 attack in the United States; its direct geographical relationship to the continued contest-ground of Kashmir; and the lingering (and perhaps deepening) divide between India and Pakistan, which has been partly responsible for the instability of the entire region.

The resulting film, The Sky Below, is structurally a kind of travelogue and portrait of a place. Content-wise, it is a complex work of art that investigates history and humanity. I met many, many people and heard many, many stories over thousands of kilometers of travel. Some stories were memories; some stories were rationales; and some stories were never spoken, but nonetheless found other ways to be expressed. The political earthquake of 1947 had split a people apart in ways they did not expect.

In these last few years, curiosity about Partition has caught the imagination of many who recognise that time is running out to capture first-hand accounts of 1947. Yet, some argue that today’s young generation was born much after Partition occurred and it’s not relevant to them, so why is it even a topic of discussion?

Since I made The Sky Below, the India-Pakistan (and Kashmir) relationship never seems to be very far from my conversation and circumstances. Last year, I was invited for the first-ever Lahore Literary Festival to be on a panel about Nation, Nationalism, and Identity. This past April, I was in Amritsar helping to work on a political campaign. Both locations featured prominently in the film, and I was thrilled to return to these historically connected cities.

One location I visited in 2006 and then in 2014 is Pul Kanjari, a village which is historically important to both Lahore and Amritsar. It is set deep into the farmlands, far off the main Atari road; yet, for all its serenity and seclusion, it is barely a kilometer from the international boundary. There is an Indian Border Security Force (BSF) encampment right next to the beautifully maintained 19th century-era heritage site.

In 2006, I remember standing in front of the ten-foot high fence next to Pul Kanjari and looking out towards the Pakistani Punjab. The dust kept rising and falling in the wake of a passing tractor or from farm activity in the fields. The BSF guards on duty at the border were napping under their watchtower because of the heat. Most symbolically ho ever was the sound of the azan floating effortlessly towards India from Pakistan like an invisible reality.

In 2014, I visited the Line of Control (LoC) area in Uri, on the Indian side Kashmir and other areas nearby which tourists don’t normally go to because they seem to be drawn to the trifecta of Sonamarg, Gulmarg, and Aru Valley. When I visited the usual tourist places in 2006, it seemed to me that the refrain was quite clearly about Kashmiri Independence. This time, eight years later, the refrain was quite clearly about a Pakistani Kashmir. Interestingly, the many people I heard who aligned with Pakistan had never visited Pakistan. It was like a house they could see but could not enter. There was a strong call for Modi to become Prime Minister because it would further justify their anger towards ‘Hindustan’. Well, Modi is in place now. What will this ‘justified’ anger bring forth?

I met a schoolteacher, who, unlike most others, had actually visited Pakistan. He came back a changed man. Pakistan is visible to the naked eye from his home in Uri. It is not a far off distant land that features only on nightly news. He could walk there in ten minutes if there weren’t thousands of guns pointing down the road. It is quite literally the next hill in an unbroken, meandering landscape. Like most others in this district along the LoC region, he had wanted Kashmir to be with Pakistan. He wanted to enter this house that he could see so well. But since visiting Pakistan, he no longer harbours the same desires. What changed him, I wondered.

What this one man’s story signifies is that direct, first-hand experience is the key to fostering a sense of History, a sense of Identity, and a sense of understanding. Track Two activists on both sides of the Indo-Pak border have been demonstrating this for decades. It is the lack of direct experience in which fractured identities continue to create fractured histories.

Another gentleman I met in Uri is battling to regain ancestral property because the tangled wires of the LoC happened to come down all around his home. He had to flee without a second thought and without compensation, not unlike some who fled their ancestral homes during Partition. We managed to have tea on his property by way of the Indian security forces’ hospitality.

What a strange experience to sit with such formality in a circle of men, one of whom was living out the nightmare of being so close to his home but not able to go to its door; another man who was by default in a position of power to now hold the keys to the door because it was a basecamp; and yet another young man who was eagerly engaging in light-hearted conversation with an Indian soldier, but kept eyeing the very visible Pakistani army posts with awe. We sipped our sweet hot tea while chickens and dogs roamed freely, quite oblivious to the political tremors below the surface.

These are but two stories of people whose lives are split apart by these continued political earthquakes, sixty-seven years on. Sixty-seven years is a lifetime for some. Constantly watching out for the next earthquake throughout one’s lifetime is no way to live.

Born in Patiala, Sarah Singh spends her time primarily between New York and South Asia. After her critically acclaimed film on Pakistan and India “The Sky Below”, she is working on “A Million Rivers” a feature film set in India and Pakistan starring Om Puri and Lillete Dubey.
Website: www.sarahsingh.com