To Delhi with love 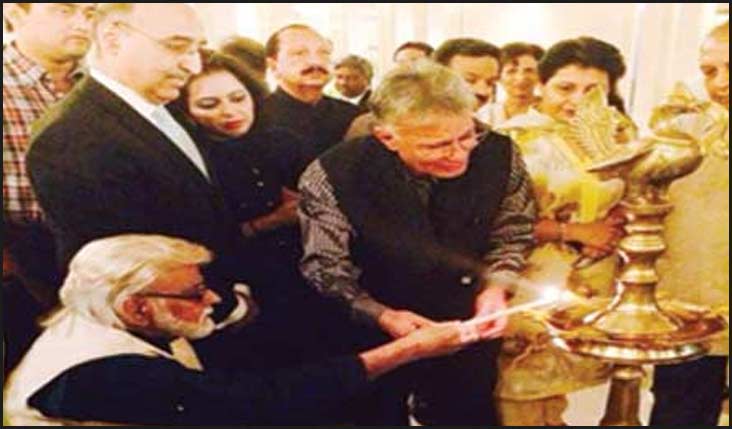 The Aalishan Pakistan 2014 Lifestyle Exhibition in New Delhi last week created a welcome buzz, winning hearts and showcasing a side of Pakistan that Indians don’t often get to see.

The second edition of the exhibition organised by the Trade Development Authority Pakistan (TDAP) in Delhi in collaboration with the Indian Commerce Ministry, Indian Federation of Commerce and India Trade Promotion Organisation, ran from September 11-14, at Pragati Maidan.

The exhibition featured over 200 stalls showcasing Pakistani products ranging from textiles, leather, fashion accessories and handicrafts, to engineering and agricultural products. Also on offer was a dazzling array of Pakistani cuisine and fashion extravaganza by notable designers, bursting with talent and positivity and projecting a side of Pakistan that Indians rarely see. The exhibition also embodied the commonality of the rich cultural background that both countries share.

A debonair Deepak Perwani in black and red sherwani brought the house down with his Namaste as he came to take a bow towards the end of the show.

The TDAP exhibition in 2012, held at a smaller scale, had attracted business to the textile industry. This time, many more brands participated, including big names like Chen One, Origins, Khaadi, Gul Ahmed and Junaid Jamshed expecting bulk orders on a sustained basis.

There is a demand in India for well-tailored clothing, cuts and fabrics different from locally produced ware. The vast variety of Pakistani design lines featured in Aalishan Pakistan was aimed at testing the Indian market’s response to different products and form a better customer base, said Wardha Saleem, CEO of the Fashion Pakistan Council, whose own range featuring pret, luxury pret and formals was also on show.

Faiza Samee had earlier missed Lakme Fashion week in Mumbai because of a visa delay, but this time her splendid bridals provided the style and inspiration on it takes to make a statement this wedding season.

A visa delay also prevented Karachi-based designer Sania Maskatiya from being present with her acclaimed ‘Barre Sagheer’ (South Asia) collection. However her work with its custom prints and easy-to-wear, distinctive cuts was very much present, and had already been a hit at its Lakme India debut earlier. Enthusiastic about promoting the softer side of Pakistan, she says, “India is a great potential market for Pakistani clothes because at the end of the day we have a similar in culture and dress taste.”

Having participated in Lifestyle Pakistan 2012 Sahar Atif knew how much appreciation and success Pakistani designers get in India. “Indian buyers always love Pakistani fashion and textiles. Such events open doors to large scale orders and joint ventures which have proved successful before and helped build relations with buyers across the border”. From intrepid patterns to artful silhouettes her Saai party wear collection sold like hot cakes, getting rave reviews.

Pakistani fashionistas have long been familiar with the work of Indian designers like Manish Malhotra, Sabyasachi or Ritu Beri. Aalishan Pakistan made the relationship more reciprocal.

Kicking off with a minute of silence for those affected by the ongoing floods on both sides of the border, Aalishan Pakistan in New Delhi also featured a catwalk and background music by popular singers like Zeb andHaniya, Sanam Marvi and Arif Lohar.

Well-known film director Mahesh Bhatt walked the ramp in a surprise sequence, flanked by young girls supported by the NGO Samarpan Foundation. “This isn’t Alia Bhatt, it’s her father,” said Bhatt. “This event combines my two loves – the cause of the girl child and my belief that the cultural space can bridge the gap between India and Pakistan.”

Speaking to The Times of India, he added: “Both countries are catering to a very young constituency. Young people aren’t hostages to the bitter history. They see a brave new world and I think when you reach them through lifestyle, which they wear and which adds to their persona, you send a subtle but powerful signal. Lala (Pervez Lala of Lala Textiles, Pakistan) is working here with the NGO Samarpan Foundation, who will benefit from this event. I am a father to three daughters – Pooja, Shaheen and Alia – and through my movies – Tamanna, Arth and Daddy – I’ve always put the girl child at the centre. I feel the significance of the girl child should be reinforced through every platform, so it gets embedded in people’s thick heads.”

Indian dams on Chenab and Jhelum cannot cause floods in Pakistan - John Briscoe Counter misperceptions, use water as a tool for cooperation, urge experts