Signs for those who will see 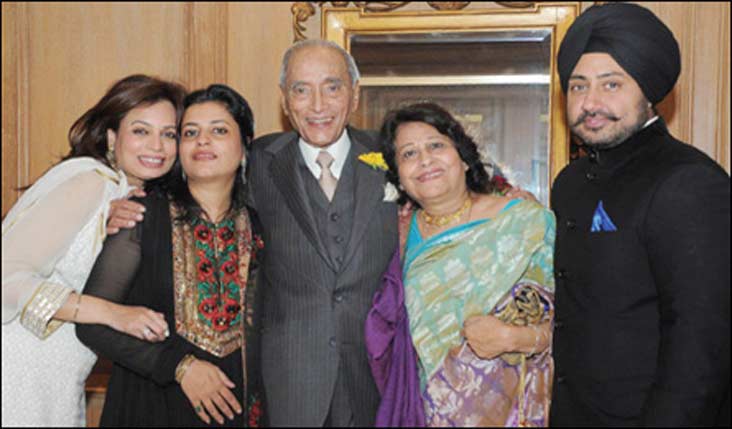 Ashwini Kumar and wife; with friends and family celebrating his 90th birthday party

A visit to Delhi for the 90th birthday of Faiz’s old friend, Urdu poet and Old Ravian, Ashwini Kumar underscores the need for the two governments to let the people meet. Milne Do!
By Zarminae Ansari

At the end of last year, I was organising some potential Aman ki Asha projects and interviews in Delhi, and was requested by my friend Yamini Kumar to schedule my visit to India around her father’s 90th birthday on December 28, 2010. Mr Ashwini Kumar is a legend, which is probably why I was able to get a visa to attend his 90th birthday,

Mr Kumar, the son of a distinguished physician of Lahore, the late Dr Vishwa Nath, took his Master’s degree in History from Government College, Lahore, where he was also the assistant editor of the college magazine Ravi. A crack boxer, a fine hockey player, an athlete and rower he caught the eye of the Federal Public Service Commission, which selected him for the Indian Police in 1942. He represented his country in hockey, boxing, rowing and athletics. He retired as a director general Border Security Force after serving in the police force for 36 years as one of the most distinguished officers. To date he is the highest decorated Indian police officer for gallantry and distinguished services, having been awarded the President’s medal for gallantry (two citations), the President’s Medal for Distinguished service and the Police Medal of Meritorious Service and the Padma Bhushan award.

He has been the vice president of the International Olympic Committee, a very rare distinction, and was the first from the Asian, Latin America and African continents to have been elected to this coveted post. In his capacity as security delegate, he organised security for all the Olympic Games since 1980. Mr Kumar has also been Chairman of the Olympic Radio commission.

He was awarded the Order of Merit of the International Hockey Federation (1982). In September 1990, he was specially honoured by the Olympic Council of Asia with the prestigious Order of Merit for the development and promotion of sports in Asia. He was declared “Policeman of the Millennium” in Sydney during the 2000 Olympic Games. For his work as security delegate to the 1992 Olympic Games, he was awarded by the king of Spain, one of the highest civilian decorations in Spain. He has also been specially awarded a sports distinction medal by the Brazilian Government, and in Paris in 1996 the Centenary award for services to sport by the International Olympic Committee. In 1997 he was awarded Medal of Merit on behalf of National Association of Olympic Committees of the World. For his outstanding work in International Sports, Mr Kumar was awarded the rare Olympic Order in 2002 in Mexico.

He is an Urdu poet, a musician and President of the Harballabh Music Festival in India, in which old and new masters religiously participate. He is a well-known sports commentator as well as a published author who has written on topics as diverse as Indian classical music, crime and terrorism. He has also authored many papers on sports in developing countries and on security issues. He has represented India in numerous international meetings with Pakistan, Bangladesh, Nepal and Iraq.

Vivacious Yamini’s CV isn’t too shabby either, though she has many decades to catch up with her illustrious father. With an honours degree in History from the prestigious St Stephens College, New Delhi, she received a Post Graduate Diploma in Management (PGDM) World Politics, and a Masters degree in International Relations from the London School of Economics, and an MBA from The American College, London. She is currently the human resources lead for Asia Treasury and Corporate Tax India for a major US-based corporation.

Yamini invited me to come and read Faiz at the elaborate dinner planned for her father’s birthday. Among the distinguished guests at the function was the Pakistani High Commissioner Mr Shahid Malik. I had suggested reading one of my favourite poems: Tanhai (Solitude). Her father had spent much time in Lahore during the pre-partition years and was a friend of Faiz Sahib’s. According to his daughter, when the poem Tanhai, was written, Faiz sahib said to Ashwini uncle “Ash – listen to these verses I just wrote”. Ashwini Kumar was the first person to hear the poem.

This weekend as a new book is launched in Islamabad on Faiz to kick-start his birth centennial celebrations, I will be attending the ceremony to get a signed copy of this Urdu book to send across the border to my friend’s father.

I’m a person who does not believe in coincidences, but in signs for those who will see.

Two days later, on Dec 31, 2010, I ran into Muzaffar Ali and his wife Meera on my return flight to Karachi. Muzaffer Ali is, of course, the talented designer and the famous director of the classic Bollywood film Umrao Jan starring Rekha. He and his wife had also been invited to Ashwini uncle’s 90th birthday, and had seen me recite Faiz Sahib’s poem on stage with Ashwini Uncle reciting each verse along with me.

I asked them why on earth they were coming to Pakistan New Year’s Eve, considering the security situation. Turns out they were on their way to his aunt, Begum Wajid Ali’s 90th birthday! Further coincidences include the connection of Muzaffar Ali’s family – his uncle, Wajid Ali was a close friend of Ashwini Uncle, as was his son in law Dr Rafique. Ashwini Uncle also knows Begum Wajid Ali’s son, Shahid Ali, now the IOC (International Olympic Committee) member from Pakistan, extremely well.

If this doesn’t show how many common connections we have, and how many people have loved ones and memories across the border, and how we are all linked, I don’t know what does.

Memo to our two governments: Milne Do! Let people meet.

The writer is an architect and researcher based in Islamabad.
Email: [email protected]