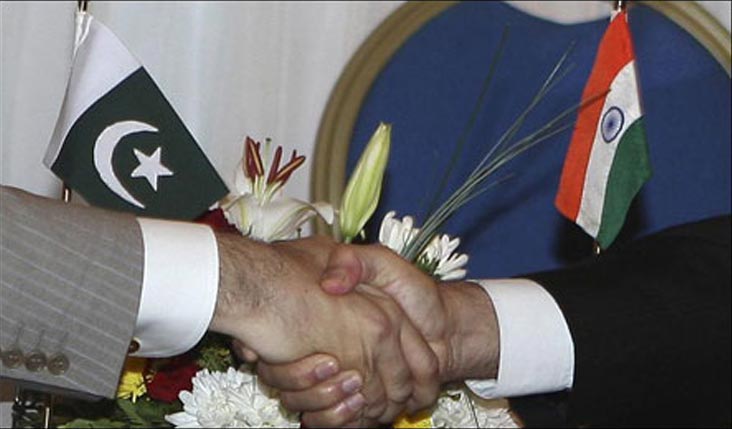 LAHORE: Pakistan and India should wage “a war of trade,” which will ultimately help both countries live in a peaceful environment for the benefit of the people on either side of the border. By enjoying strong trade ties, the two countries will be heavily dependent on each other and no party will be able to disturb the peace.

This was the message brought by the Indian delegates, who crossed the Wagah border on Sunday afternoon to attend the two-day second Aman Ki Asha Indo-Pak Economic Conference titled “Dividends,” scheduled to kick off at the Pearl Continental (PC) Hotel today (Monday).

The Indian delegation comprised leading businessmen, industrialists and entrepreneurs representing various fields, as well as officials from the Confederation of Indian Industry (CII).

Adesh Gupta, CEO Liberty Shoes Limited, was of the view that in addition to establishing cultural relations, both India and Pakistan should connect with each other through trade and commerce. This is in the interest of both countries, he added. He suggested the initiation of “a war of trade” between the two countries, saying that such a move would be for the betterment of the people on both sides through enhanced trade.

While terming his first-ever trip to Pakistan as exciting, Adesh Gupta said he had been to many countries but had never crossed [this] side of the border.

Regarding Aman Ki Asha – a peace initiative launched by the Jang Group of Pakistan and Times of India – he said the initiative could unite the people of the two countries and suggested that the peace moves between Pakistan and India should also be part of the wider political agenda and not just be limited to the economic agenda.

“We always wish India and Pakistan enjoy normal relations,” he said, adding, “This will take time, but new initiatives and the process of dialogue should continue.” He also stressed on the need for the exchange of brands and joint ventures between organisations of the two countries.

Similarly, Justice (retd) VK Gupta termed his first visit to Pakistan as ivery emotional.i According to him, maximum volume of trade between the two countries would make India and Pakistan heavily dependent on each other and minimise the role of anti-peace elements. VK Gupta also described Aman Ki Asha as a good initiative, and talked in length about the proactive role of the judiciary in the two neighbouring countries. He also observed that the judiciary in India had a slightly different perspective, as it was more development related.

Anuj Chowdhry, one of the directors of the Delhi Stock Exchange, who was accompanied by his wife Seema Chowdhry, expressed his hope that relations between the two neighbouring countries would improve. While pointing towards the border, he said:iThis barrier should not be there.

He also revealed that his father had belonged to Dera Ismail Khan while his mother was from Bannu. The couple expressed their immense joy on being in Pakistan and said the two countries shared so much in common including similar cultures. Seema Chowdhry remarked that Pakistani suits were very popular among Indian women and expressed her desire to shop during her stay in Pakistan.

Suman Preet Singh, from the Confederation of Indian Industry (CII), said it was his first visit to Pakistan, adding it felt like home. He also termed people-to-people contact as being very important, saying, “We cannot live with sad memories of the past. We need to move on promoting trade and business between our countries.

Ashish Agarwal, who owns Onco Life Sciences (Pvt) Ltd Company, said there was great scope in the field of biotechnology, pharma and healthcare between the two countries. He explained that this was his second visit to Pakistan, and that he had many friends in Lahore, Karachi and Peshawar.

Abdul Mateen, Director Unicure (India) (Pvt) Ltd, opined that Aman Ki Asha was a fine initiative, and that trade ties between Pakistan and India would undoubtedly benefit the peoples of both countries, and that Pakistan in particular would find a good market in India.

Dr Neeru Bhatia, Executive Director of Astron Hospital & Healthcare Consultants (Pvt) Ltd, said the peace initiative Aman Ki Asha and the conference would certainly strengthen the bond between the people of Pakistan and India. She said the conference would provide a good opportunity to share ideas, and improve practices in terms of healthcare structures and hospital planning. She also expressed her excitement over her first ever visit to Pakistan. She explained that her parents were from Rawalpindi, adding,iThe time I stepped into Pakistan, I had an immediate connect to this country. It is like coming back to our roots.

Sudhir Kapoor, Co-chairman Education Committee, appreciated the efforts of Aman Ki Asha in bringing the two countriesi stakeholders to a common level where everything was on the table. He praised the efforts of Shahrukh Hasan of Jang Group and Pak-India Business Forum CEO Amin Hashwani by saying: iThese two gentlemen made entire effort for this initiative which brings top Indian business groups to Pakistan.”

Former Chairman National Association of Software and Services Companies (NASSCOM) Harsh Manglik said that long journeys always begin with a small step, and that India and Pakistan had taken many steps after Aman Ki Asha, which would hopefully deliver good results. He affirmed that both Indians and Pakistanis had an emotional attachment with each other while the cultures of the two countries also bore significant resemblance. He said that the experience could be mutually advantageous, as both India and Pakistan could benefit by learning from each otheris development trajectories. iGreat potential exists on both sides of the border and what [is] required is only the need to pay attention to it,” he added. He revealed that the Indian IT sector was ready to share its expertise and excellences with its Pakistani counterparts, and that this would develop friendships and open avenues for regular visits between the people of the two countries.

Deputy Director General CII Virandra Gupta was optimistic that with the opening of trade between India and Pakistan, bilateral trade would quadruple from the current figure of $2.7 billion to an estimated $10 billion by 2015. He revealed that two auto-wheel manufacturers were also visiting Pakistan for the first time. He also said home appliances and consumer product manufacturers, a healthcare delegation as well as producers of agricultural chemicals and textiles were visiting the country.

Rahul Kansal, Executive President The Times of India Group, said that major changes on various fronts had taken place during the last six to eight months. iIt is time to get gains from these positive developments and the 2nd Business Conference under Aman Ki Asha would be a great opportunity to ripen these gains,” he claimed. He also said that both countries were making substantial efforts to achieve an easy visa regime for their peoples in a bid to remove hurdles in trade, and were also inviting investors across the borders for investment in each otheris countries. iThis has all happened due to the efforts made by civil society of the two countries, media and other concerned people,” he added. He further said that the civil society of the two sides was working with zeal and dedication for the promotion of peace, and that other people should also join in the efforts to help accelerate the process.

Pak-India Business Forum CEO Amin Hashwani, meanwhile, said the role of the governments was that of a facilitator, while the private sector and civil society were responsible for bridging the missing gaps. He appreciated the efforts of the private sector and civil societies in helping the two countries amicably solve their differences. He also said the 2nd Business Conference would provide an opportunity to the business community, policymakers and stakeholders, to sit together to discuss their concerns and issues in a positive manner.

Shahrukh Hasan, while terming the Indian delegationis arrival as a new era of opening in the subcontinent, said that it was a great day for both Indians and Pakistanis. iThis achievement is a result of Aman Ki Asha which was launched by the Jang Group and Times of India two years ago on January 1 2010, and now the first-ever and the biggest conference of the two sides is going to be held,” he affirmed, before adding, i[The] top one hundred Indian companies n which are really the movers and shakers of the Indian economy and are playing a driver’s role in Indian economic growth n are participating in the Aman Ki Asha Business Conference, and it is all the result of the untiring efforts of these two groups.i

He praised the governments and the private sectors of both countries for supporting the efforts of the two media groups of Pakistan and India, and said the conference has greatly reposed their trust in Aman Ki Asha. He added that Pakistan’s prime minister, foreign minister and finance minister had all confirmed their participation in the event, in addition to the countryis leading business tycoons. i[The] people of the two countries should get rid of the orthodox approach and jointly move forward,” he said.

Shahrukh Hasan said that some concerns of the industrial sector were genuine while the rest were just misperceptions which would be removed in time by holding joint business conferences, discussions and dialogue. In the last discussion in Karachi, he explained, a number of issues had come under discussion including health, information and technology, textiles and education, and that these very discussions would be instrumental in resolving all issues in the future. He added that the conference would help resolve various post-MFN regime issues by finding ways to handle them.