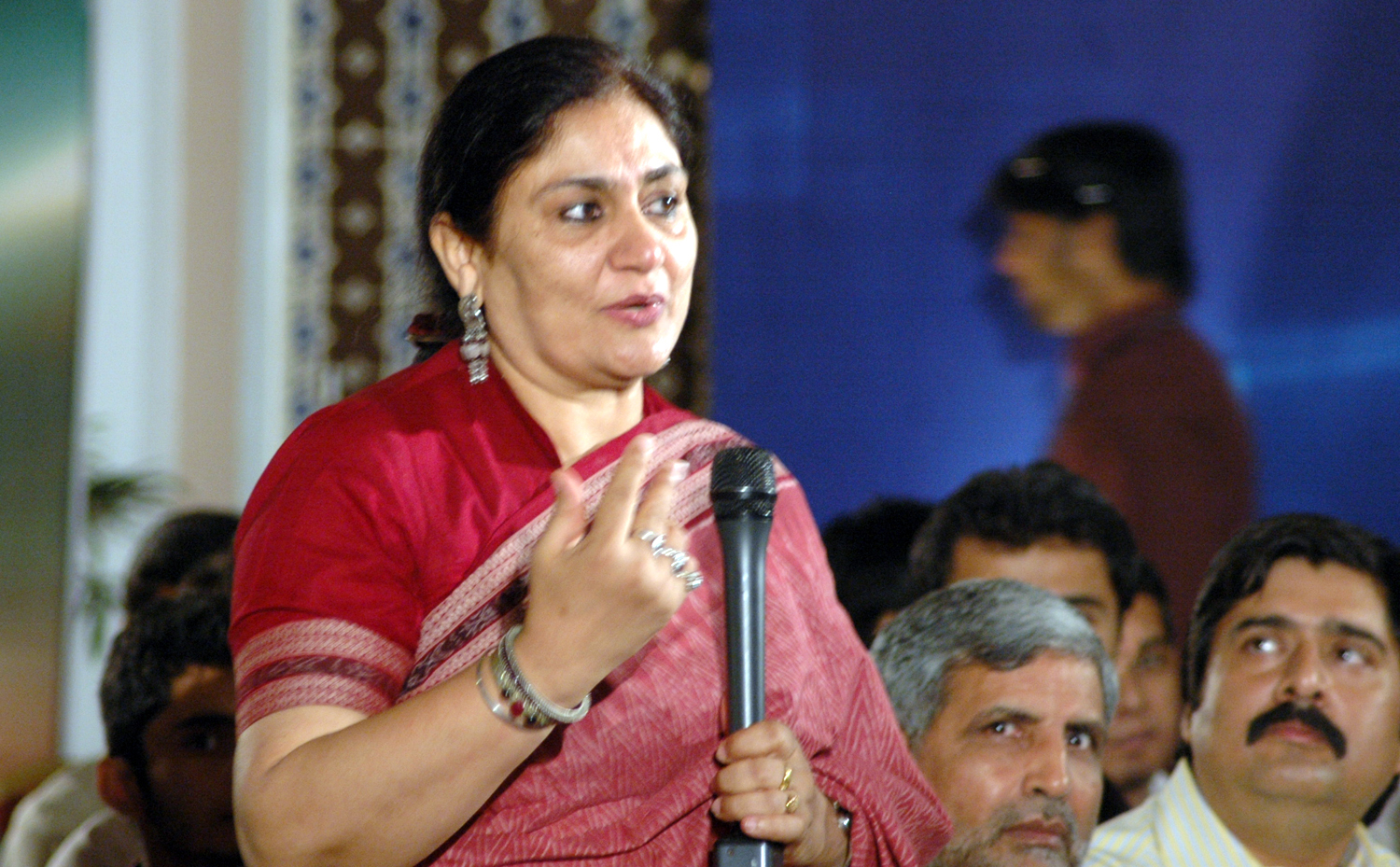 Madeeha Gauhar, May 2010, at an Aman Ki Asha seminar in Lahore. File photo.

When Madeeha Gauhar passed away on 25 April 2018, those who knew her found a little space in their hearts filled with a void. She had a towering, magnetic personality. Her impressive body of work and commitment to the ideals of humanity and peace impacted many in big and small ways.

I first met Madeeha Gauhar at the first South Asia Free Media Association (SAFMA) meeting in Islamabad in 2000. We encountered each other while waiting outside the hotel along with our respective husbands to leave for a formal dinner. I remember her wonderful Urdu accent and her throaty confident voice. In her bright silk sari, she was instantly appealing. Shahid Nadeem, her husband, veteran writer and director, was mostly quiet. Later, we learnt that he also had a Kashmir connection.

All of us shared a passion for theatre and India-Pakistan friendship. My husband, Prabodh Jamwal, had acted on stage with a Jammu-based theatre group Natrang for years. To our joy, we learnt that Madeeha had directed the acclaimed play Ek Thi Naani written by Shahid Nadeem, featuring the two illustrious sisters Zohra Sehgal and Uzra Butt who were separated at Partition and brought together to share the same stage in 1993 after a gap of 40 years.

The play made the news for its remarkable attempt to highlight the common cultural heritage of the two countries and challenge the distortions in history, as well as how both societies discriminate against women. The story, told through the separation of two sisters and families divided by the borders, was also controversial by Pakistani extremists and ultra-nationalists who termed it anti-Pakistan.

Madeeha spoke briefly about the idea behind the play and the theatre group Ajoka that the couple had run for years. But much of our conversation in the car during that brief ride was on India-Pakistan relations. Madeeha and I were both members of the Pakistan India People’s Forum for Peace and Democracy but had never. At that first, brief meeting, I was awed by her. I was surprised to discover much later that she was also a warm, affectionate and sensitive person.

A common friend connected us on email in 2004 after Madeeha showed interest in the story of a Pakistani woman from Mirpur who had been imprisoned in a jail in Jammu in 1995. Newly married and suffering from depression, Parveen Kausar (also known as Shahnaz) had jumped into the river to end her life but was swept ashore on the J&K side. After being hospitalized for three days, she was charged under the Passport Act and sentenced to a year’s imprisonment. Initially incarcerated in Poonch District Jail, she was raped by a jail warden (who was later charged and tried for the crime).

In 1997, Parveen gave birth to a baby girl she doted upon. After the Indian court quashed her detention, the tensions between India and Pakistan delayed her repatriation. When it finally materialised, Pakistan refused to accept her India-born daughter. Women groups and individuals on both sides advocated to ensure that she could take her daughter with her, which she was finally able to do. I sent Madeeha copies of reports published by Kashmir Times and other papers as well as the contact of her lawyer, advocate A.K. Sawhney.

We next met in 2005 in Jammu when she brought over the powerful play ‘Bullah’, written by her husband Shahid Nadeem – the first ever play from Pakistan staged in Jammu & Kashmir. I was spellbound by the immense power and boldness of Madeeha’s theatrical brilliance showcased by this play based on the story of noted Sufi saint Bulleh Shah and his philosophy of humanity.

Madeeha updated me about the progress on her drama Dukh Darya based on Parveen’s story. She never tried to meet this traumatised woman, maintaining that any conversation would renew Parveen’s trauma, which she did not want to be responsible for. Instead, she collected fragments of what was already in the public domain and talked to those who had worked for Parveen’s release and repatriation to Pakistan to resurrect the story. Her reluctance to turn the woman into some kind of a public spectacle showed her utmost sensitivity.

The following year, my father and I along with my sister and daughter happened to be visiting Lahore when Dukh Darya made its debut, written like most Ajoka plays by Shahid Nadeem. Madeeha invited us for meals several times and we also saw the play. The heart rending story was beautifully blended with the issue of India-Pakistan animosity. Madeeha cleverly used the feminist metaphor of mythological Sita and the arrows of her two sons, Luv and Kush, to portray the pathos of separation, longing and suffering.

In much of Madeeha work, she liberally used folk tales, legendary stories and traditional theatre forms to connect to the South Asian audience. Feminist themes, humanity and peace were also an essential part of her productions, that showcased her bold. liberal views. Despite the threats, she was indomitably defiant and spirited, facing criticism both in Pakistan and sometimes also India.

She wanted to stage Dukh Darya in Jammu in 2007 and 2008, but each time the organizers developed cold feet — the theme was too bold and likely to cause controversy. Finally, Madeeha dropped the idea. However, she kept visiting Jammu and Srinagar, often bringing CDs of her productions for us when she came.

Beyond the intellectual level, we bonded over similar political and liberal views. On a deeper and more personal level, she also connected with my father, Ved Bhasin. Both shared a common commitment to various issues and were irresistibly affectionate with an amazing sense of humour.

After Madeeha came to Jammu in 2005, her family and ours became close friends. Her younger son, Sarang, would accompany her as ‘Mamma’s traveling partner’ until he was about 10. She often stayed with us in Jammu and we looked forward to the hours of discussions, sharing hopes, fears and laughter. During these visits, I learnt about the many facets of her amazing life – her years of activism during the Zia regime when she courageously joined other Pakistani women in fighting for liberal values. I found a child-like quality in her wit and enjoyed her love of good food and clothes. With my sister, she shared a passion for shopping and sometimes they would both disappear for hours in the markets.

Whenever she visited India, which was quite frequent, she would at least make a phone call. Once she called, upset at having learnt that Parveen, on whose life her play Dukh Darya was based, had died. On another visit, she talked about her play Burqavanza running into rough weather with the Pakistani authorities.

A few years ago, she asked me to write an invitation letter for visa purposes for her sons to visit Jammu and Srinagar for a holiday that summer. I sent the letters, inviting them to stay with us. I didn’t hear from her again but by late August, the CID sleuths started investigating whether I had sent the invitations and how we were related. Apparently, they weren’t quite acquainted with the idea of ‘friends’ and made several visits to our house and my office as well as my sister’s to get a better sense of this cross-border ‘friendship’. Expecting that the matter had been satisfactorily explained, we looked forward to seeing Madeeha and family but even after the CID sleuths disappeared from the scene, there was no news. It was impossible to connect to Pakistan on phone from Jammu and Kashmir and e-mails weren’t Madeeha’s strong point.

Then one fine day in September or October, I got a surprise call from Madeeha. She was visiting Mumbai and was with Seema Sehgal, the famous Dogri and ghazal singer from Jammu who has a close association with our family. She said the Indian High Commission in Islamabad had rejected her family’s visa applications in July – well before the sleuths started investigating my invitation. We laughed at how things function in sub-continental bureaucracy, and she promised to visit the following year.

I didn’t hear from Madeeha for over a year after that. The autumn of 2015, my sister visiting Delhi heard that Madeeha was there for her cancer treatment. Meeting her, my sister marveled at how courageously she was battling her disease and responding to the treatment. I spoke to her on phone and she spoke with as much gusto as every but was sad about my father’s illness and talked about him for some minutes.

Some months later, after my father passed away she called and expressed her condolence. She said she was recovering and was continuing with her work. She sounded in high spirits. Nothing could chain or break her. Her lifetime is a great achievement and I am proud to have been personally associated with her.

Her untimely death is both a personal loss and a loss for the causes dear to her. Her work and legacy, however, live on. She will be missed. Adieu Madeeha!