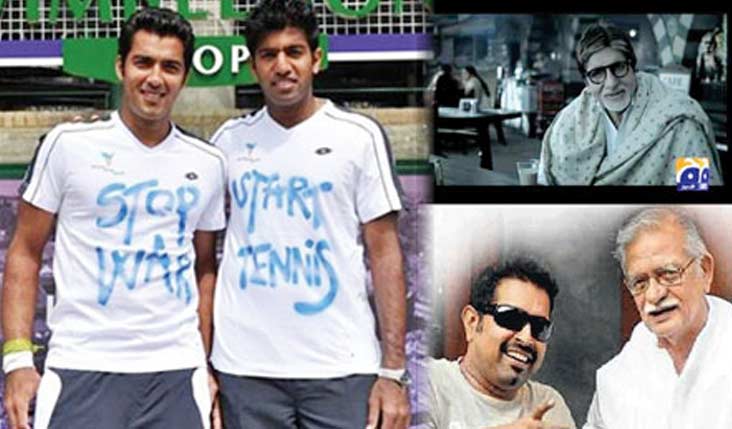 The subject of Indo-Pak relations is widely discussed on both sides of the border. Efforts continue to be made to keep the ball rolling and move in the forward direction to bring about a change for the sake of the peoples of these two neighbouring countries.

Whatever the magnitude of the differences or the bitterness of the past might have been it’s never too late to do something worthwhile to accomplish the mutual objective of prosperity and progress in the region. As they say there’s light at the end of every tunnel. The past cannot be changed but we have every right to put our acts together to make our present and future better than before.

Some touching scenes were witnessed when I spoke my heart out at the Aman ki Asha session, organised as part of the Rotary Annual District Conference held in Ludhiana, India, from February 3-5, 2012. Trust me, quite a few persons broke into tears during the course of my speech when I ran the video of the Aman ki Asha ‘anthem’ (Yeh Sur Bulatey Hain).

Being the keynote speaker at the session provided me yet another opportunity to share my thoughts and vision with the leaders of Indian society. There’s no doubt in my mind that the majority of those present there, if not all, agreed with my view that history may have divided us but geography binds us.

Rotarians have been working for peace without negotiating treaties or demonstrating in the streets. Instead they are developing peace by working together irrespective of nationality or background. They have been putting others’ needs above their own, in the spirit of service above self.

Rotarians build peace by dealing with the problems that disrupt the ability of people to lead normal lives, ranging from shortage of water and sanitation, to safe affordable housing. Many of these problems stem from the shortage of education or healthcare. From the Rotary platform, those involved in all these beneficial acts, highlight the need to build productive and positive connections between communities.

Rotary leaders in both India and Pakistan are aware that they have a responsibility to bring about a positive change in the lives of the people in both countries. They strive towards making the world a better and more peaceful place through their initiatives.

They have been proactively playing their part in achieving peace through service to humanity. The outstanding work of Dr Satyajit Bose, a famous cardiac surgeon, and Chairman, Mission Hospital, Durgapur and Dr Devi Shetty in Bangalore deserves special mention. They have performed hundreds of surgeries under Rotary’s Gift of Life project as well as the Aman ki Asha-Rotary Heart to Heart programme.

Their immensely beneficial Pacemaker Bank has also brought smiles back to the faces of many people. Now there are plans to build a hospital in Karachi, with the help of Rotarians from India, to be rather appropriately titled Peace Hospital. The Youth Exchange programmes as well as goodwill cricket tours have helped the cause. Rotarians have set the example. The need of the hour is to capitalize on these efforts.

Aisam-ul-Haq of Pakistan and Rohan Bopana of India took the world by storm when they became partners in tennis. They performed exceptionally well in the doubles events, signifying the virtues of unity.

We need to keep this sporting spirit alive. We should have more bilateral sporting competitions. Our cricket teams are among the best in the world. Let them play each other more often, as people in both the countries are particularly crazy about this sport. Why not provide them opportunities to engage in such healthy activities on a more regular basis instead of being deadlocked?

We also need to encourage bilateral cultural activities as our performers and artists have massive followings on both sides of the border on the strength of their outstanding talents. Let our people get entertained and enlightened, because they deserve it. Trade and commerce is an area that concerns the livelihood of people. Pakistan’s giving India Most Favoured Nation (MFN) status will surely be a catalyst in enhancing business activities in both countries.

India and Pakistan should learn from the examples of France and Germany and other European countries that have overcome their centuries-old disputes over borders and territories. As neighbours, they have continued to engage in trade without barriers and the results are there for everyone to see.

Similarly Pakistan and India can do their people a great service by putting aside the political differences and letting trade activities be carried out normally. Let the long-standing disputes between countries be resolved by the statesmen. Let the economies of both countries be boosted with normal trade relations that will, most importantly, benefit the common man.