Walk on… for peace 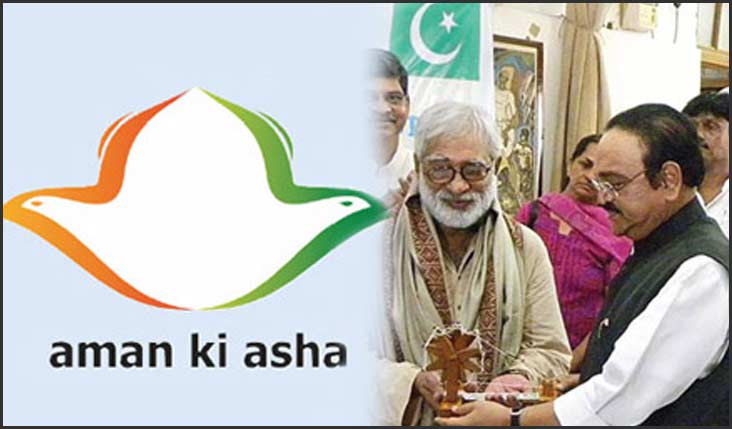 Even as official diplomatic relations between Pakistan and India see-saw, the people of both countries continue walking, slowly, steadily, towards peace and improved relations. The latest such initiative is that of a civil society group pushing for people-to-people contacts, traversing those roads that politicians often fear or fail to tread.

Encouraged by Aman ki Asha, Aman ke Badhte Qadam, or the India-Pakistan Peace Caravan set out July 28 this year. The last time they embarked on such a journey was in 2005, when they marched from the dargah Hazrat Nizamdin Aulia in New Delhi to Hazrat Bahauddin Zakaria in Multan. The tremendous reception they received from ordinary people along the way was most encouraging.

“We presented people with our demands,” says Dr Sandeep Pandey, the social activist and Magsaysay Award winner of Lucknow, one of the organisers of Amn ke Badhte Qadam, “First, resolve all problems through dialogue. Second, de-weaponise and remove armies from the borders. Third, end visa restrictions. I remember this cyclist who said, ‘Make the third demand your first. Once that happens, the rest will sort out’.”

This year, the Indian contingent of the caravan set off from Mandi Bhawan in Mumbai, where Mahatama Gandhi resided, and from where he was arrested. The Pakistani contingent departed from Karachi, after an evening of talks, vigils, and poetry readings at the Arts Council.

The caravans will continue their trajectory across the two countries, stopping at symbolic locations including temples, shrines and historic landmarks. Everywhere, people greet them with enthusiasm and goodwill. Politicians have hailed the caravan, schoolchildren have cheered it on, and religious figures have blessed it as passes through.

The message is clear – the people of the subcontinent want peace. They recognise the historical, cultural and social ties that bind these neighbours, ties than run much deeper than politics.

Every year on August 14, well known journalist and peace activist Kuldip Nayer leads a candlelight vigil at the Attari border in India. Volunteers from Pakistan conduct a similar vigil on this side of the border. Aman ke Badhte Qadam, having traveled across both countries will arrive at the Attari -Wagah border on Aug 14 and merge into these vigils. Volunteers from both caravans are carrying soil from their countries on their journey that they will mix together in a symbolic gesture of solidarity.

Amn Ke Badhte Qadam has a four-fold agenda that its members advocate across the two countries. Ease, or even eliminate visa restrictions between India and Pakistan, and allow people to cross the border as they would want to, allowing them to maintain centuries-old trade and cultural routes. Establish unconditional friendship between the two countries, and then start to discuss contentious issues including Kashmir. Amn ke Bathde Qadam also argues for nuclear disarmament and the dismantling of the military-industrial complex, and immediate cessation of all proxy and low intensity wars against one another.

But are people receptive to this message? Certainly, there are many who view such peace initiatives with some scepticism.

As Dr Pandey acknowledges, peace in South Asia cannot simply be achieved through one or two such events. However, he argues, “The Peace Caravan will provide an opportunity to the peace-loving peoples of both countries to give voice to their urge for peace and friendship and help build an atmosphere that should ultimately persuade the two governments to listen to the voice of sanity.”

This voice is gaining force. Initiatives such as Amn ke Badhte Qadam are receiving widespread support across the two countries. And despite the fact that the Peace Caravan is the first public effort to promote peace and friendship between India and Pakistan post the 26/11 attacks, there has been no strong opposition to this initiative. It seems people are indeed ready to embark on the slow march to peace, knowing that they have a long road ahead of them.