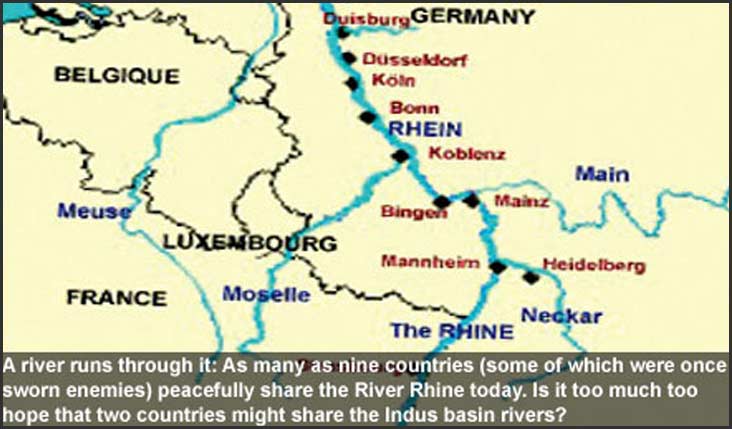 India-Pakistan ties continue to be marred by areas of discordance, most notably ‘terrorism’ lies at the core of trust deficit. Flowing underneath but threatening to spill over is another contentious issue. Water. There are allegations from various sections in Pakistan that India is choking Pakistan’s lifelines that flow out of India and “stealing” water from poor farmers. As part of Aman ki Asha’s endeavour to look at hard issues,

The Times of India, and the Jang Group along with Delhi-based Centre for Dialogue and Reconciliation organised a seminar of experts from the two countries in New Delhi last week. A report.

Misperceptions rather than facts dominate the debate on water between Pakistan and India. Pakistan’s green belt draws its sustenance from rivers that flow out of Jammu and Kashmir. More than 60 years after these waters have been peacefully shared, there are mounting accusations from sections of Pakistan that India could choke this supply line by building a series of dams – or, according to more recent allegations in the wake of devastating floods in Pakistan, release more water that could worsen the floods situation.

Sitting across the table for two days, top water management experts and irrigation engineers from both countries discussed the issue, often with sufficient rancour, if only to understand each other’s positions as a starting point on a journey to cool the debate that some hawkish commentators have suggested could lead to war.

At the centre of the debate was naturally the 1960 Indus Water Treaty that governs the river flows into Pakistan and provides an agreed dispute resolution mechanism. In recent months, the buzz in Pakistan has been that India was building more than 100 dams on the Sutlej and Chenab and that would deplete supplies to farmlands that feed Pakistan’s 180 million people.

While some Pakistani experts stuck to that position, most appeared convinced that India was not violating the IWT by building these dams and what was planned were a few dozen small projects, called run of the river, which wouldn’t obstruct flows but only divert them for a short stretch to run power turbines.

The meeting coincided with a new row over the 330mw Kishanganga hydroelectric project in Jammu and Kashmir. India and Pakistan, after failing to resolve it within the IWT, agreed to international arbitration with the UN secretary-general selecting an umpire.

“There is no drying up because run of the river project deplete water only at filling time of new dams. Whether there are 50 or 100 it doesn’t matter. You can’t store running water,” said B G Verghese, a water expert associated with the Centre for Policy Research.

Others like Ramaswamy Iyer, a former bureaucrat, agreed to Verghese that while neither India nor Pakistan were models of water management, there was no data to show that New Delhi was cheating on the Indus agreement. In fact, experts from both sides agreed that there was no data available to shape a reasonable debate guided by facts.

To this end, the conference urged that both countries jointly plough for data and make it public in order to clear the fog. Joint mechanisms to measure water flows into Pakistan, as done in the case of Bangladesh, could remove mistrust, they said.

Water Boiling Over Across LoC Walk on... for peace